Messer will stage the retrospective "Re-membering an Archive: Iris at 10" during the FotoFocus Biennial 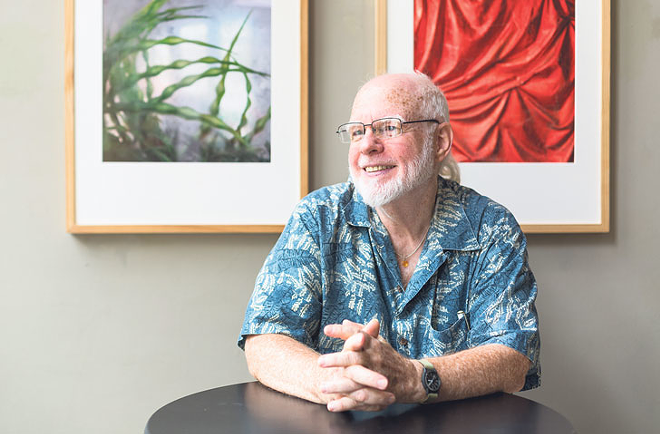 William Messer was wearing a nametag, but he wasn’t sure who he was anymore. The curator of Iris Bookcafe and Gallery was decades removed from his 1970s heyday as the American upstart who introduced the U.K. to its own contemporary photographers as well as emerging artists from the rest of Europe. He had seemed on the verge of establishing an even bigger reputation back in his own country in 1983, when a long recovery from a traumatic brain injury (TBI) dashed those plans. For a year he struggled to write or even use a phone.

Now here he was in 2009, about to address art critics in Ireland, when the world’s foremost authority on painter Francis Bacon approached and inquired whether he was William Messer — the William Messer. “Does everybody know who this is?” British scholar/curator Martin Harrison asked the crowd. “This man is a legend in my country.”

Occasional words of affirmation have kept Messer motivated back in his hometown of Cincinnati — though it’s clear he’d like more recognition for his work in art and anti-censorship circles. His is a tale of two lives — before and after the injury affected his rise. “People here really don’t know much about me,” he says.

Messer has curated four photography shows a year at Iris for 10 years, bringing in international names and museum-quality exhibits. Now he’s calling it quits, tired and ready to move on, though not away, after he stages Re-membering an Archive: Iris at 10 during the FotoFocus Biennial. A retrospective of work by artists he has previously shown, it opens Sept. 28.

Though he grows frustrated with some of Cincinnati’s movers and shakers (and vice versa), Messer clings to the idea that one person can make a difference. He understands that he comes across as arrogant because of his standards, but he also chokes up multiple times during our interview, which took place days before a major surgery unrelated to the TBI.

As he regains strength while preparing for his final Iris exhibition, he’s asking each of the nearly 40 photographers he’s presented over the years to provide a single picture. The show’s title borrows from the FotoFocus theme of “Open Archive,” but it also speaks to how much memories, and being remembered, matter to Messer.

His appreciation for photography as a fine art led him to Britain in the early ’70s and a role with Bill Jay, onetime editor of the influential Creative Camera magazine, as Jay became the first director of Photography at the Institute of Contemporary Arts in London. Alone, they built a slide library for the institute’s Photo Study Centre. Messer felt like a pioneer, especially as he later reached out to emerging photographers in Eastern Europe while directing a gallery in Cardiff, Wales.

“Every place, they were discovering their own photographic history one country at a time,” he says.

Messer tears up as he speaks of Jindrich Štreit, a Czech he calls the best photographer he’s ever seen. His works documenting life under Communist oppression were smuggled to Wales so Messer could arrange a show.

Unfortunately, Messer was voted out of his job in Cardiff before he could host an exhibit. And back in Czechoslovakia, authorities learned of Štreit’s activities and imprisoned him. Štreit gained fame since then, but Messer feels remorse that attention didn’t come sooner.

An undaunted Messer had hoped to continue showcasing international names in San Diego, where he was applying to be the founding director of the Museum of Photographic Arts. Then his accident happened and he returned to Cincinnati to recover from the TBI.

“Everything sort of drifted away,” he says. “There was nothing left but me.”

He’d find purpose again working with Iris owner Julie Fay, as curator at the since-closed Images gallery and as a voice against censorship during the 1990 obscenity case against the Contemporary Arts Center over pictures by Robert Mapplethorpe. Following the CAC’s acquittal, Messer steered Images toward groundbreaking shows about AIDS, gender and the environment.

In 2015, he was one of the curators for After the Moment, the CAC’s 25th anniversary retrospective of the Mapplethorpe exhibit. That same year, he showed some of his own work at The Carnegie. Largely, though, he’s felt left out here.

“I raise issues. I say things out loud,” he says.

He did that more than 50 years ago as a student at Cincinnati Country Day School, where he successfully persuaded administrators to introduce an arts curriculum. Even after he’d found a teacher and a classroom, the leadership told him no other students would be interested. “ ‘You’re the only one.’ This is the sort of thing I’ve heard all my life,” Messer says.

But Cincinnati hasn’t heard the last of him.

He’s writing a history of photography for children, for one thing. There’s also an exhibition he wants to do, called The Naked Truth. It would be an extension of a workshop he did in former Soviet Georgia with four women. Barred from having live models, Messer introduced them to naked self-portraiture. He chokes up again as he remembers Qeta, one of the participants:

“She said, ‘Before I took this workshop, I didn’t know who I was, or what I wanted to do with my life. Now I know both,’ ” he says.

Qeta later photographed Georgian women of all ages and sizes naked in their kitchen, the only place they could call their own. “And it was beautiful,” Messer says. “They radiate. You can feel them going, ‘This is me! This is my space! This is who I am!’ ”

As he bares his soul to Cincinnati, Messer is saying the same thing.