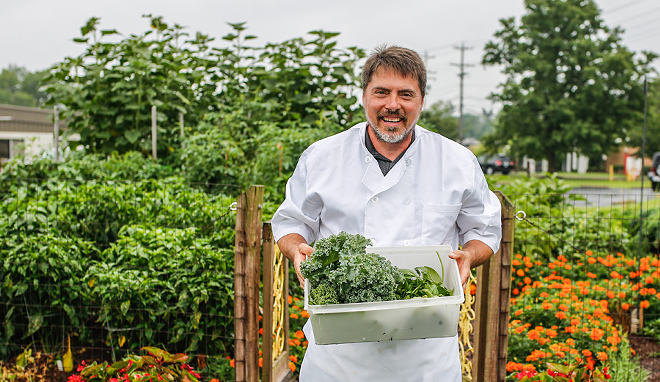 There is a very short distance between the farm and table — or at least garden and table — at Through the Garden Restaurant in Blue Ash.

Offering casual American and Mediterranean fare, Through the Garden’s patio is flanked by 2,000 square feet of local produce that is tended by restaurant patrons and served to guests within hours or minutes of being picked.

John Caldwell and his wife Molly bought the restaurant 12 years ago. Before that, Caldwell was the chef at Applewood Bar & Grill in Aurora, Ind. He runs the kitchen and Molly, a full-time nurse, helps with the hospitality side of the business, everything from management to waiting tables.

Not all of the produce used is grown on-site, however. Caldwell explains that they grow as much as they can and supplement using standard local suppliers. The produce is seasonal, too, so in colder months, farm-to-table fare is limited to what has been canned and preserved during the summer. This summer has yielded a plentiful crop of tomatoes.

You can see the garden for yourself from the patio or ask to be led on a brief tour. Caldwell is proud of his plants and happy to pull up a beet or carrot and dust off the dirt so it can be admired. They also grow snow peas, green beans, pumpkins and more. The gardeners who tend the fruits and vegetables that are destined to become next week’s lunch special are Jim Lallathin and Diane Rinaldi. They’re not employees; they do it for fun and the food.

“We were sitting out here on the patio and the garden had been taken over by a lot of weeds,” Rinaldi says. “It hadn’t been tended to or kept for like a year and so we thought it would be a good project to clear it out, build the fences back up, put a path in and make it workable again.”

That was three years ago. Since then, the two friends have worked regularly at pulling weeds, watering and keeping pests away. They laugh, referencing a protracted groundhog hunt from a past growing season. They won, but it was with a live trap, so they can reasonably claim no animals were harmed in the making of this meal. It’s a lot of work, Lallathin says — 20 to 25 hours a week.

Lallathin says it’s mostly organic, but “there’s a little cheating in there.” Marigolds line the path through the garden to keep small animals away from the plants.

To Caldwell, the garden part of Through the Garden is the core of their identity. “A lot of people ask about it and walk through our garden,” he says. “It’s out here and it’s a centerpiece. It’s nice while they’re waiting for their lunch and dinner to walk through. We let some of the customers have some of the produce, too, to take it home for weekend dinners.”

Besides being fresh, the food is also well crafted. Dressings, sauces and spices are all prepared on-site. Caldwell says this is key to the quality of the food they serve.

The texture of the vegetables is noticeably firm and springy — dishes like the zucchini pasta, which substitutes shaved strips of zucchini for grain pasta, offers a lively fresh feel in the mouth that makes diners forget that their meal is both vegetarian and carb-free. The gazpacho is excellent as well, made with tomatoes and cucumbers that were cut free from their plants just hours before serving.

“When the kale comes in, it’s just so fresh and ready to go,” Lallathin says.

“The best is when there’s a lot of something, John makes a special out of it,” Rinaldi says. “He has his zucchini noodle going on because there’s so much zucchini right now. And he’ll make these power wrap sandwiches with chicken, but also kale and beets. Whatever we have a lot of ends up being on the plate as a special.”

“He makes fried green tomatoes that are to die for,” Lallathin adds.

Caldwell says, on one hand, he has a greater degree of control over the result of his work as a chef because he is growing so much of the food. In another way, he says, there can be variance in the dishes due to weather conditions and what vegetables are in season. The consistency to the fare is found in his preparation and recipes.

“The weather in Cincinnati, since it’s so different year to year, plays a big part in it,” he says. “You never know what you’re going to get.”

This summer has been wetter than previous years, so there hasn’t been as much watering needed. Still, it’s a lot of work to raise the plants, tend them and bring them to the plate. But it’s worth it. Lallathin and Rinaldi smile often while talking about working in the garden. And it’s clear the most important thing the garden grows is joy.

“When you come to this restaurant it’s all so fresh and healthy,” Rinaldi says. “When I think about where I’m going to go to eat, I’m either thinking about the atmosphere, like at a bar where there’s a game on TV, or I think about the good, healthy food. That’s what I think about when I come here.”