The steamed bun shop is opening a new, expanded spot on Republic Street for grab-and-go 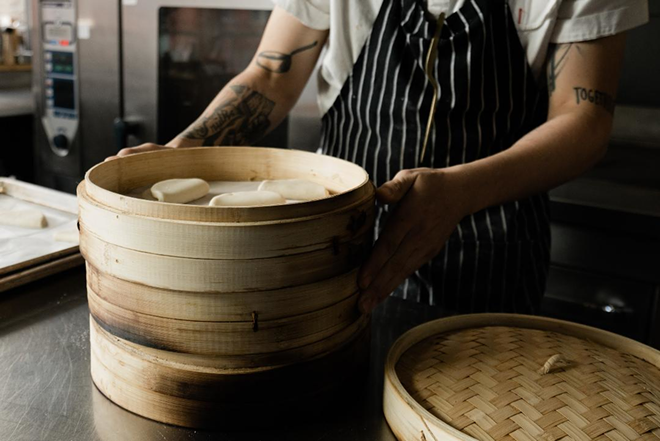 Nathan Friday is the man behind Boombox Buns, Over-the-Rhine’s source for homemade Chinese-style steamed buns, also known as baozi or bao. Boombox is the first brand within Friday’s company, Together We Eat, and it likely won’t be the last.

He made his debut as a restaurateur when he opened Boombox Buns for weekend-only, walk-up-window business on Woodward Street in an empty space behind The Takeaway Deli and Grocery in the fall of 2018. And soon, Boombox will reopen in a new, bigger space at 1400 Republic St. as a full-fledged, four-walled eatery. (They ceased window operations at the end of January to prep for the relocation.)

Like the walk-up on Woodward, the Republic location — formerly home to Injoy Street Food — will also be carry-out only. There are only four seats, if you’re lucky enough to snag one, and drinks are self-serve. Expect the same in-and-out service you got on Woodward. As Friday puts it, “No (table)service, not my problem; no silverware, not my problem;” only this time, you don’t have to wait outside for your order.

The space on Republic has been a long time coming. Friday dropped out of the culinary school at Sullivan University and it was for the better, he says. When he got serious about his dream to cook, he took to teaching himself and learning everything he needed to know to advance his career. Ten years in the industry and several restaurant gigs later, he’s fulfilled his dream of opening his own restaurant.

Two years of weekend service and sticking to a very tight budget got him to where he is now.

“What people don’t realize is that Boombox was an entire life change. I started a window-painting business to save money for the original window. I stopped spending money and I just saved,” he says. “I wanted to come up with $10,000 to invest and I got halfway. I started the window with $4,500.”

The walk-up was neither a pop-up nor did it operate around normal business hours, opening 7 p.m. Friday and Saturday until the last bun went out the window. Prepping for a weekend-only restaurant with minimal space wasn’t ideal. After selling out on Friday night, Friday would go home and have a quick nap only to rise an hour later and begin prep for Saturday’s service. He worked out of the Incubator Kitchen Collective in Newport, which is a shared space with limited access to outlets and counterspace, so cranking out buns during the day just wasn’t practical.

But version one of Boombox was a stepping-stone for version two.

Like most folks who grew up in the 1990s, Friday has a particular fondness for Chinese takeout. Before he ventured to Cincinnati, he single-handedly ran the steamed bun and dumpling station at Rook in Indianapolis, a contemporary Asian street food spot (he also did a stint as a sous chef at local OTR eatery Please).

He said the restaurant opted to skip the prep process and used premade, frozen buns. Not many people make buns from scratch these days, Friday says. Any recipe dug up will likely be in Chinese and buns are time consuming and environmentally sensitive — they require a certain level of humidity during the proofing process, which is essential to their texture. A lot of people take the processed route because dough proofing sounds intimidating.

In his quest to know more about homemade buns, he stumbled across a textbook about steamed breads, which is where he gained the know-how to start dabbling in baking science. Finding the balance and being able to produce a consistent product was integral. Friday says it took him about nine months to really lean into his bun recipe and fully understand what was happening at each stage of the process.

“I have this curiosity about things and I learn everything I can about something until I understand it, and then I move on to something else,” he says.

You can count on the beef and sweet potato buns from the walk-up being on the new menu. They were winners on Woodward. The beef bun is reminiscent of black pepper beef — spicy enough to keep you on your toes and umami enough to keep you coming back for seconds.

As for the vegetarian sweet potato bun, Friday says he nailed it on the first try. “Since the first time I tested it, it’s been the same. It was salty, sweet, crispy, crunchy; it’s exactly what I want.”

And while the menu at the new spot won’t be as limited as it was on Woodward, it won’t exactly be extensive. Expect another veggie bun as well as a second meat-based choice and a fifth bun option that will change seasonally.

Opening a restaurant has been on Friday’s mind for the past five years. In fact, it’s been part of the plan. Boombox is the first in a series of unforetold future achievements. Since he learned about the big names like Eleven Madison Park and Alinea and the endless possibilities that can be reached in the world of food, he’s wanted to venture into tasting menus and fine dining restaurants. For now, he’s created a brand that’s incredibly simple and wonderfully approachable with plenty of room to grow.