The organization provides fresh produce to those living in Cincinnati’s food deserts. 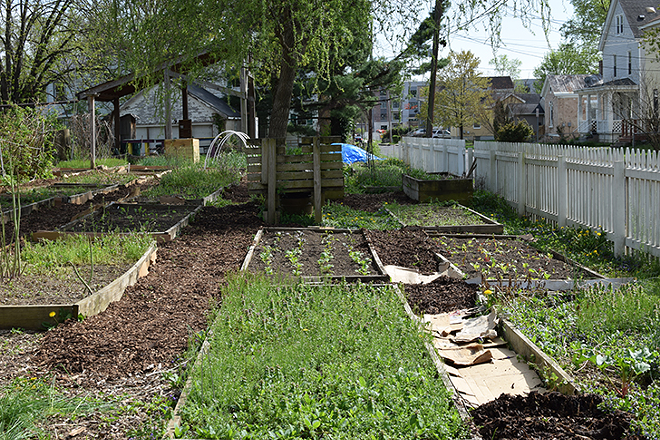 Domonique Peebles walks along a mulched path hemmed in by raised plant beds at a garden site in Madisonville. The founder of local urban farming nonprofit Brick Gardens points out what’s growing in each container.

“Right now, we already have some (produce) like swiss chard, mustard greens, broccoli. In those far beds over there is a lettuce mix,” Peebles says. “You see the beds that just have soil? Those already have seeds in them. We’ve got carrots, radishes, beets.”

It’s a breezy spring day, and volunteers from MadTree Brewing are milling about the property, helping Peebles and his team prepare the beds for the growing season. Soon they’ll have summertime grub: corn, zucchini, squash. There’s hops and a raspberry bush along the perimeter, and cherry and pear trees around the corner. And just across the street is Brick Gardens’ greenhouse, the Lighthouse Green Learning Center powered by Groundwork ORV. Inside, sun streams through its slanted roof and onto trays of seedlings.

Brick Gardens operates four different plots to help feed residents in Madisonville, Bond Hill, Evanston, Avondale, Norwood and Roselawn. The organization’s mission is to provide fresh produce to those living in Cincinnati’s food deserts by converting vacant buildings and lots into outdoor urban farms and indoor hydroponic/ aquaponic grow spaces — all with a focus on neighborhood involvement and education.

Founded in 2016, the idea for Brick Gardens first took root while Peebles was living in Over-the-Rhine. When the Kroger on Vine Street closed, he found himself traveling across the river to Newport, the closest grocery store at the time, to buy food not only for himself but also for those who didn’t have reliable access to a car.

A farm-raised native of Louisville, Kentucky, Peebles knew how to grow vegetables. “But I lived in OTR, so I didn’t have a backyard. I just had a slab of concrete,” he says.

That’s when he learned about hydroponics, a way of growing plants without soil. Similarly, aquaponics — used by Brick Gardens — relies on waste produced by fish to supply plants with nutrients to grow in water.

With a possible solution in front of them, the same neighbors for whom he grocery shopped became interested in establishing their own growing system.

He brought his idea to philanthropic investment lab People’s Liberty, became a 2016 grantee and received additional funding in 2017 to continue the project. It’s been a full-time job ever since.

“My first neighborhood was Roselawn at New prospect church,” Peebles says. “We started farming outside; we had chickens out there. And then we were growing hydroponically in their basement. Other neighborhoods started hearing about it. Community councils started reaching out saying, ‘Hey, can you build this here? We have this vacant space.’”

Now Brick Gardens has a site on Xavier University’s campus, two in Madisonville and another at Bond Hill’s St. Aloysius, a mental health and education center. The latter, Peebles says, will take five years to completely build out. Boasting eight acres, it will become the home of their “true urban farm.”

“We’re slowly working on the soil. But we’ve partnered with that school to where agriculture is integrated into the daily schedule,” he says. “We have classes that will come out throughout the day and they’re actually going to get their science, math and reading while they’re in the garden, and the teachers will correlate those things together.”

When Peebles first received the People’s Liberty grant, he didn’t foresee what Brick Gardens would ultimately become. But organizations and neighborhoods continued reaching out with interest.

“Every day that I woke up and was like, ‘Oh, looks like this project is over!’ I’d get an email or phone call or something that just kept it going. Now I literally get up every day and I laugh,” Peebles says. “I’m like, ‘At least I still get to do this because it keeps happening.’”

And the Brick Gardens model may expand beyond Cincinnati. Peebles says exciting partnerships are brewing, and organizers from other cities like Cleveland and Louisville have been indicating their interest.

Sitting by the Madisonville greenhouse, a few workers stop to ask Peebles a question or give a simple hello. The workday is about halfway over, and the afternoon sun is still bright.

Along with volunteers from MadTree, some of the workers on this particular day come from Groundwork Ohio River Valley, a nonprofit that centers on racial environmental justice — specifically, the group’s Green Team, an initiative designed to instill job skills and a greater understanding of the surrounding environment for high school students.

Most of the Green Team members working on this site come from Madisonville or the surrounding area. That’s intentional.

“When we go into a neighborhood and we look at blight, one of the things we try not to do is go into that neighborhood assuming something that they need,” Peebles says. “Even if you are doing a community garden to get rid of that blight, it doesn’t mean that that neighborhood wants you there. What we try to do is, in addition to removing blight, put a meaningful project behind it.”

The Madisonville site is one such example. Once a vacant spot, it now grows thousands of pounds of food. Members of the Green Team live in the neighborhood, and the garden itself is meant for the community at large.

“When you’re employing people in the community, it gives them a sense of ownership,” Peebles says. “So now we are leaving behind, ‘That’s a club I’m not invited to,’ because you’re actually being employed to be in there. And you get food access.”

The produce is sold within Madisonville at Brick Gardens’ farmstand, where two youths who live in the neighborhood are employed for the summer. They sell it inside Madisonville and keep the dollar circulating within the community, Peebles says. There are also vegetable beds that are free for picking, no questions asked. In the future, Peebles hopes to implement a system where residents can order seasonal produce to be dropped off at their doorstep, delivered via bicycle.

Brick Gardens also engages with residents to ensure that the produce grown is what the surrounding community enjoys and wants. After all, every neighborhood has its own demographics and, therefore, tastes. Is it really for the community if you’re growing produce they wouldn’t buy or eat, Peebles asks.

“People always tell you what they need if you listen, right? We try to make our job easy because everybody has to eat,” Peebles says. “So just grow good food, and then educate people on how to do it and why they should do it. And then if you offer a job in that same breath of air, then I think that’s the circle that needs to be closed.”