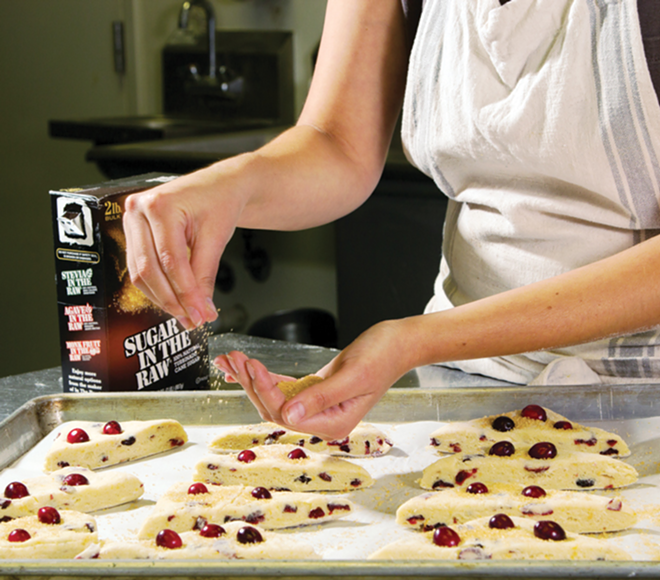 “I started baking with my grandma when I was really little,” says Fornshell, who grew up in Ross, Ohio, 30 minutes from Cincinnati. “She baked with her grandmother, and my mom couldn’t bake to save her life, so it was always something to look forward to, to go over to my grandma’s house.”

When she was in college, Fornshell took care of her mother who had fallen ill. That experience motivated her to pursue her passion.

“I was like, ‘I’m going to do what makes me happy,’ ” she says. “I had always been baking for family and friends so I decided to actually learn what I was doing, and I signed up for culinary school.”

After graduating from the Midwest Culinary Institute in 2012 with a degree in pastry arts technology, she sold her baked goods on the weekends to earn extra cash. It was at the 2012 City Flea holiday market when Fornshell sold her first homemade treat to the public.

“That night it clicked: Oh, people actually like this and will actually buy it,” she says.

Two years later, Brown Bear Bakery is a full-time job for Fornshell, who doesn’t get much sleep; she’s always baking something in her Oakley home kitchen or in the Savor Catering and Events kitchen she rents out in Newport, Ky.

“I don’t remember the last night I went to sleep with a clear head,” she says. “I wake up and go. I’ve got so much to do, but I get it done at the end of the day. It’s stressful but rewarding.”

She doesn’t have a brick-and-mortar shop yet — that’s the dream — but she provides weekly baked goods for Carabello Coffee and Trailhead Coffee (inside Reser Bicycle Outfitters; they make a Grizzly — their take on a mocha — with her caramel sauce instead of chocolate) and will present her goods at this month’s Crafty Supermarket and next month’s City Flea holiday market. She also takes private orders from customers.

What separates Fornshell from a lot of traditional bakers is her approach: She does everything herself (occasionally, her boyfriend will help out), and uses all organic and natural ingredients — no dyes, no artificial flavors and no lard (she’s a vegetarian), which is why her pastries look so stunning. The desserts are lighter and more natural; they taste lighter, too. (Check out her mouth-watering Instagram feed @brownbearbakery.)

“I like things to look natural, kind of rustic but refined at the same time,” she says.

She’s currently baking up a storm with her holiday menu, replete with ginger molasses cookies, “Oreos” made with jet-black cocoa powder and real pumpkin filling, espresso macarons (incredibly good), and an assortment of other small-batch, holiday-themed pastries that she’ll box up and sell at the aforementioned markets.

As a Southern lady from Kentucky who was used to a lot of lard in her pies and biscuits, grandma wasn’t always impressed with Fornshell’s baked goods.

“I would visit her in the hospital and bring her leftovers from class and a lot of times she didn’t like them, because they’re too fancy,” Fornshell says. “She’d be like, ‘Stop at Frisch’s and get me a piece of pie.’ I slaved away today making this and she just wanted coconut pie from Frisch’s. So I do a coconut cream pie now.”

As a child, some of Fornshell’s friends gave her the sobriquet “Bear” because it sounded like Blair, and the name stuck.

“I always loved bears, so I did research on them and they’re pretty solitary animals except when they’re feeding. It’s a time to come together and nurture. I’m like, that’s me,” she says. “I know maybe a chocolate chip cookie isn’t that nutritious, but it makes you feel comforted. It’s nice.”

This year, she’s cooking her family a holiday dinner.

“This will be my first year hosting Thanksgiving,” she says. “If it goes badly, it’ll be better next year. My family’s pretty nice — they’ll be easy on me.”

To bring some sweets inspired by Brown Bear to your own family Thanksgiving, try Fornshell’s chocolate pecan cinnamon cookie recipe. (Ingredients are listed by weight for accuracy.)

Scrapings from one vanilla bean *Note: vanilla beans can be found at Colonel De’s in Findlay Market

Instructions: Rough chop the pecans and place on a sheet tray. Bake at 325 degrees for 10 minutes or until fragrant. Remove and let cool. Sift the flour, baking powder and baking soda into a bowl and set aside. In a stand mixer or with a hand-held mixer, cream butter, sugars, salt, vanilla scrapings, vanilla extract and spices until pale. Beat in the eggs in two additions, making sure the first is well incorporated before adding the second. Scrape the bowl down with a spatula and dump the flour mixture in. Turn the mixer on low and mix until the dough just comes together. Add all of the chocolate and toasted pecans and fold in by hand.

Cover with plastic wrap and refrigerate for 24 hours. The next day, line two baking sheets with parchment paper and portion into 3 oz. balls. Place six per baking sheet. Bake at 350 degrees for 14 to 18 minutes until the edges are golden brown, and the centers are light brown and have puffed up. Let cool on the baking sheet for 10 minutes and enjoy! ©