Cincinnati is the Best City in America for Chipotle Lovers

According to a recent study published by Apartment Guide, Cincinnati is the best city in the nation for lovers of fast-casual Mexican grill Chipotle.

We have more Chipotle locations per capita than anywhere else in the U.S. Based on the infographic below, there is 1 Chipotle per 3.5ish red human-shaped things? 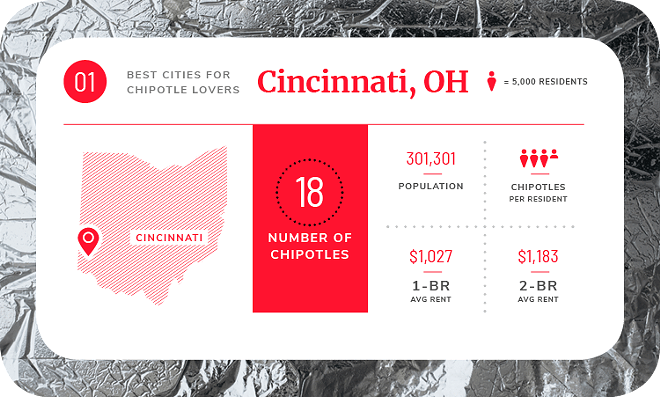 Chipotle has more than 2,000 restaurants across the U.S. but the top 10 restaurants on this list are "pretty much a Mecca for Chipotle lovers."

According to the write-up,

"Cincy's 18 Chipotles are impressive, and you won't find a better per capita ratio in the entire country. Believe it or not, there's even better news. Two words: Drive-thru. Cincinnati also boasts the least expensive rent on our top 10 list, with an average one-bedroom coming in at $1,027. Winner, winner, chicken (taco) dinner!"

*This story has been updated because that infographic is slightly confusing.