Secret Bar is a project spearheaded by Chad Turner, owner of arts and crafts store Creative House of Art and Design (CHAD). 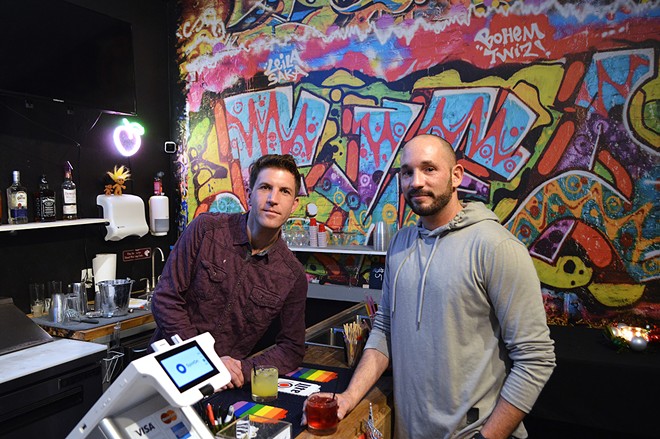 There’s more than just a name hidden in Creative House of Art and Design (CHAD), an arts and craft store that offers art instruction on Mainstrasse in Covington.

When abbreviated, Creative House of Art and Design spells out owner Chad Turner’s first name. And when you venture a little further into the colorful store – past the coloring books, markers, handmade jewelry and other merchandise – a hidden bar awaits.

Known widely as “Mr. Chad,” Turner has been a local art teacher for more than 15 years. As with so many, the pandemic threatened his career. As soon as COVID hit, he was let go from the various elementary schools where he’d been employed, he says.

But Turner says he saw a new opportunity in a space on Mainstrasse, where he now has created a place for all ages to experience art education through different types of classes and events as an alternative to big chain art supply stores.

Moreover, When the clientele is of a certain age, they have the option of utilizing the hidden bar in the back of the store.

CHAD has quickly become a space noted for its inclusiveness and LGBTQ+ events.

“I feel like there was a need for us but I didn’t know it,” Turner tells CityBeat. “And I found out that we were needed when I saw all the smiles on people’s faces. A lot of the kids who take our classes just live around the block and their parents walk them here. And other than Micheal’s or places like that, there’s nowhere else you can go to buy markers and supplies.”

In December, CHAD reached a huge milestone, hosting 200 events over its two years of operation, Turner says. Ninety-eight of those events were birthday parties. The other handful were private events, in which clients rent out the entire space; Paint Nights, when customers come to drink and paint; and Drink, Draw & Drag, when a Paint Night is hosted by a drag queen.

So where does the bar fit in? At first, it kind of didn’t.

After opening in 2020, CHAD faced both pandemic restrictions and the regular trials of opening a small business. About six months after the store debuted, the bar opened and didn’t see much action. Recently, Turner and his head bartender, Josh Drury, have set out to rebrand the bar and make it a success in its own right.

“Well, I like to have some drinks and I like to do artwork,” Turner says. “So why not make a business where we can do both?”

A few months ago, the bar - formerly known as Liquid Palette - was renamed Secret Bar. As soon as that name was drawn onto the chalkboard in front of the store, the clientele doubled, Turner says. The bar has been thriving on word of mouth along with the sidewalk chalkboard that features an arrow pointing down the alley, leading to Secret Bar’s ample patio space.

And that’s the way Turner and Drury want to keep it - kind of.

The bar seems like an ordinary extension of the store, as most of the decor is also for sale, until you turn the corner to find a huge graffiti mural highlighted by neon lights. A handful of high-top tables and a shelf full of board games bring the space together. The patio is bigger than customers might anticipate, with a blossoming garden in the spring and summer and a heated tent in the fall and winter.

Secret Bar offers a quaint and friendly vibe, one that Drury and Turner have curated to feel like an artsy cocktail bar, or an inconspicuous speakeasy. It’s a destination spot to start your night off, Drury says, and a safe space for everyone.

“We want to be more of a staple within the gay community,” Drury says. “We want to be able to offer more LGBTQ+ events, and we would love for more gay artists to be able to get their work out there. I would love for us to get to a point where, when somebody thinks about gay bars in the Cincinnati/Northern Kentucky area, Secret Bar is one of the first places that comes to mind.”

Drury says Secret Bar’s signature cocktail menu will debut in January, complete with drinks inspired by gay artists. There are four mainstay options with a rotating seasonal drink, and the first addition to the menu is Drury’s take on a classic old fashioned he named The Mapplethorpe. Inspired by artist Robert Mapplethorpe, the drink includes bourbon, maple syrup, nutmeg, a flamed orange and muddled cherry.

Turner and Drury say that within the year, they hope to add small bites to the menu and build an actual secret entrance. Turner imagines a classic bookshelf scenario, with one book being the key to the door opening.

For now, Secret Bar aims to stand on its own while complementing the various events at CHAD and to remain an inclusive place that anyone can enjoy.