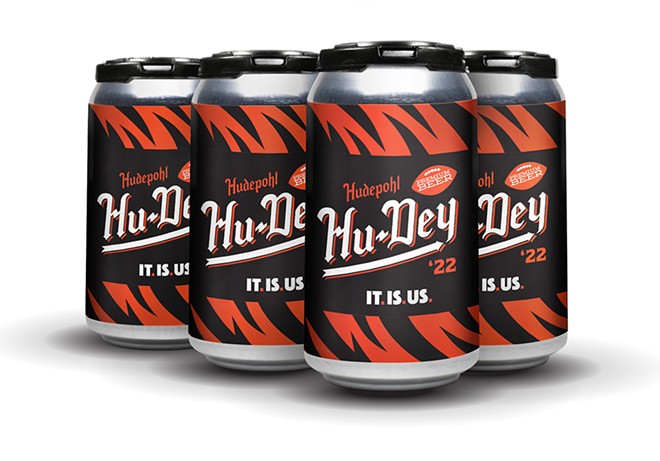 Photo: Provided by CinBev
A rendering of the new Hu-Dey beer cans.

There has always been a symbiotic relationship between Cincinnati’s Hudepohl Brewing Company, founded in 1885, and the Cincinnati Bengals, established in 1967.

And, yes, part of that is built on the rumor that the team’s “Who Dey” slogan is a derivative of fans shouting for “Hudy” beer at games.

The popular origin story even prompted the brewer to can a special commemorative Hu-Dey beer during the Bengals runs to the Super Bowl both in 1982 and 1989. You may have seen the orange-and-black cans popping up across social media as fans have broken out the decades-old brew to showcase and sometimes, unadvisedly, drink.

Now Hudepohl, acquired by Cincinnati Beverage Company (CinBev) in 2020, wants fans to keep those beers on the shelf and out of their stomachs as they release a special, limited-run new Hu-Dey brew.

“We’ve been with the Bengals through thick and thin,” Jodi Woffington, chief marketing officer for CinBev and a born-and-raised Bengals fan, tells CityBeat. “Lifelong, die-hard Bengals fans have really waited for this moment to be on the national stage again and we just felt like it was the right time to bring the commemorative can back to celebrate the city.”

The can, designed by local creative agency Borne Content, blends the old and the new and features orange and black stripes with a classic Hudepohl font.

“These brands are really iconic in Cincinnati and we wanted to make sure we gave a nod to that legacy, but at the same time, they need to be modernized,” Woffington says of the CinBev portfolio, which also includes Burger, Little Kings and Christian Moerlein. “You’ll see that the vintage comes through, but we really tried to bring them to life in a modern way as well. And that’s actually why we incorporated the phrase the city has adopted, ‘It.Is.Us.,’ on the can itself because I think we are moving into a new era with the city, with the Bengals, and we wanted to bridge the gap between old and new with the can.”

The beer itself is unique, too.

“We created a special recipe for the commemorative edition,” Woffington says. “It’s going to be only a one-time run, and it’s going to be a light, easy-drinking ale.”

Hudepohl is only making 3,000 six-packs and “once it’s gone, it’s gone,” Woffington says.

The cans will literally be rolling off the distribution line on Monday morning, Feb. 7, before they go on sale at 1 p.m. Woffington says they didn’t want to jinx anything by starting production before the Bengals won the AFC Championship — “Plans started via text the moment Money McPherson’s field goal went through the uprights,” she says — and pulling off the entire project, especially with Winter Storm Landon, was a small miracle.

Some Hudy fans were able to preorder their six-packs before they went on sale to the public. If you aren't one of those, the cans can be purchased at the brewery dock at 1621 Moore St. in Over-the-Rhine.

The beer will be on sale 1-5 p.m. Feb. 7, but Woffington says fans can start lining up earlier. They'll be at the brewery around 8 a.m.

If there are any cans left after the sale, Woffington says they'll be distributed to local retailers.

“It’s been so fun. These are the kind of projects, they’re passion projects,” she says. “We’re not going to make a bunch of money off this. We’re pricing it at 10 bucks a six-pack. This is for the city. We really wanted to give back and give people something to celebrate because Cincinnati has waited a long time for this.”

Hudepohl is anticipating that some fans will grab the cans and hang onto them as a commemorative piece, just like the cans from the 1980s.

“We definitely created this can with that lens in mind,” she says.

And she hopes Cincinnatians won’t have to endure another 30 years to drink them.

“Beer is an agricultural product,” Woffington says with a laugh. “It’s really not recommended to be consumed past its due date. There’s not anything specific we can do to the recipe to change that, to make it last a long time. Let’s just hope we don’t have to wait that long for the next Super Bowl.”

Hudephol's limited-edition Hu-Dey beer goes on sale 1-5 p.m. Feb. 7 at the brewery at 1621 Moore St., Over-the-Rhine. Learn more about Hudepohl at hudepohlbeer.com or follow them on social media instagram.com/hudepohlbeers.