From former Kaze owner/chef Hideki Harada and his wife, Yuko, Kiki doles out a streamlined menu of ramen and appetizers in a renovated old bank 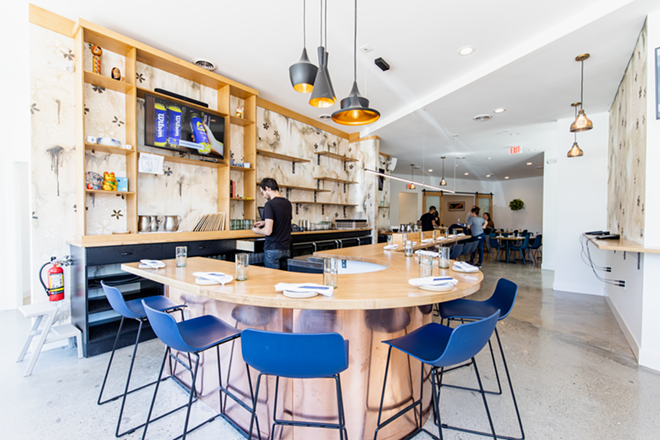 Kiki College Hill has opened its doors after two years of planning, fundraising, pop-ups and patience.

Owners Hideki and Yuko Harada have created their dream restaurant in an old corner bank at 5932 Hamilton Ave. They worked with the College Hill Community Urban Redevelopment Corporation (CHCURC) to nail down the space and build it out, while Hideki and his two sous chefs, Jordan Ellerhorst and Alex Brackett, spent a year and a half hosting pop-up ramen nights at the Northside Yacht Club. Hideki, Ellerhorst and Brackett are all veterans of Over-the-Rhine’s Kaze; Hideki was the former owner/chef of the Japanese gastropub.

The name is derived from Hideki’s kindergarten-to-college nickname, Kiki. While he wasn’t a fan of it growing up, he decided to use it as the moniker for his long-dreamed-of ramen house; it’s also the name of the bulls-eyed ceramic shot glass used in sake tasting called a kiki-choko.

A Cincinnati native, Hideki met his wife, Yuko, while in culinary school in Japan.

“She was very comforting because I was this Japanese-American in Japan, no idea about mannerisms, just a deer in the headlights,” he says. 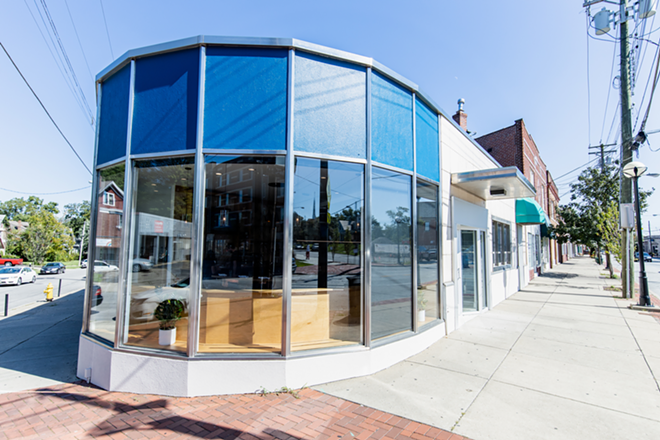 Hideki and Yuko worked for the same fine-dining sushi restaurant while they were in school. She helped him learn cultural customs that were integral to his success in the Japanese culinary industry. After some time, Hideki worked up the confidence to buy her a drink “and the rest is history,” he says.

Before moving to Japan for culinary school, Hideki worked in a corner at a sushi bar, out of sight from customers, barley making legal wages. After graduating, gaining experience with Japanese cuisine and moving back to the States, Hideki jumped around Cincinnati’s culinary scene. He helped open the sushi bar at Embers in Kenwood and later opened Kaze, where he met Ellerhorst and Brackett.

After years of using his degree for large-scale fine dining, Hideki started to lose sight of the light at the end of the tunnel.

He scheduled a meeting with the CHCURC to see about acquiring a space “and it just sort of happened,” he says.

The vision was always for an izakaya, a Japanese pub for tapas-style bites and after-work cocktails. 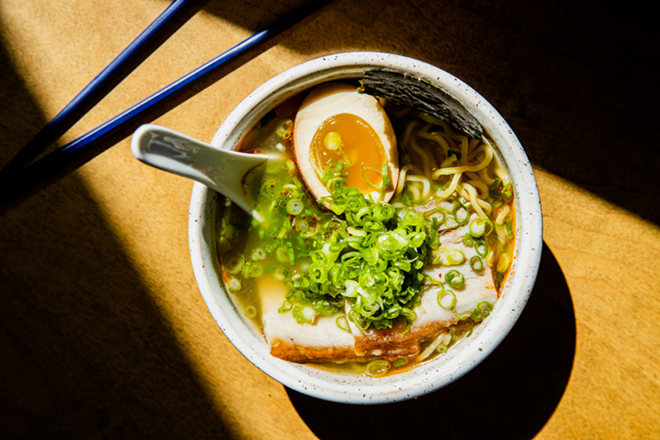 While Kiki was transitioning from an idea to reality, Hideki, Ellerhorst and Brackett sold ramen at the Northside Yacht Club on Monday nights. The pop-ups gained traction quickly. They started serving at 4 p.m. and continued until there was no more soup; some nights it only took a few hours to run their stock pots dry.

“I think our record was 190 bowls in three and a half hours,” Ellerhorst says. “We were doing roughly 50 bowls of ramen an hour.”

At the end of their pop-up stint at the bar in March, the Haradas took Ellerhorst and Brackett to Japan to experience ramen and sushi from the source. They ate at both ends of the spectrum — the multi-course fine-dining restaurants like the one where Hideki and Yuko cut their teeth, and glorified ramen vending machines where you punch in your order and a bowl of ramen shows up at a pick-up window.

Hideki and Yuko always knew they wanted to open a restaurant together eventually: prep during the day, break for lunch, sling bowls of ramen in the evening — the usual back-of-house schedule. But they also have a daughter in grade school to factor in.

“We’ll sit her down before service and knock some math questions out,” Hideki says.

You may be able to spot her bobbing bowls of ramen en route to the dining room at Kiki, or peering into the window to the kitchen, watching her parents do what they do best. 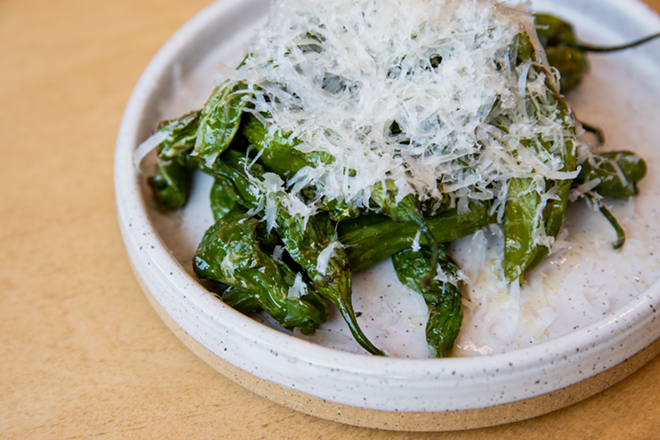 You can watch in awe, too, now that Kiki is up and running. The week of the Aug. 28 grand opening proved the community’s support for this long-awaited ramen arrival in previously ramen-less College Hill. That week’s turnout made it difficult to grab a table and even more difficult to hold it together while waiting (not-so) patiently for a bowl of noodles. It’s not that the space is small (it seats 65); it’s that so many ramen-lovers and frequenters of NSYC have been waiting years for the arrival of College Hill’s ramen spot.

There are nine appetizers and two varieties of ramen on the current Kiki menu — that’s it. But it isn’t lacking; the menu is focused and there’s a bit of something for everyone. Veg-heads and meat lovers can dine in harmony here, and there’s an option for gluten-free noodles.

The two ramen choices are shio ramen, a chicken broth with pork belly, negi (a Japanese green onion), a tea-marinated egg and rayu (chili oil); and kimchi ramen, featuring housemade kimchi, tofu, negi and a tea-marinated egg. Both are priced at $9. 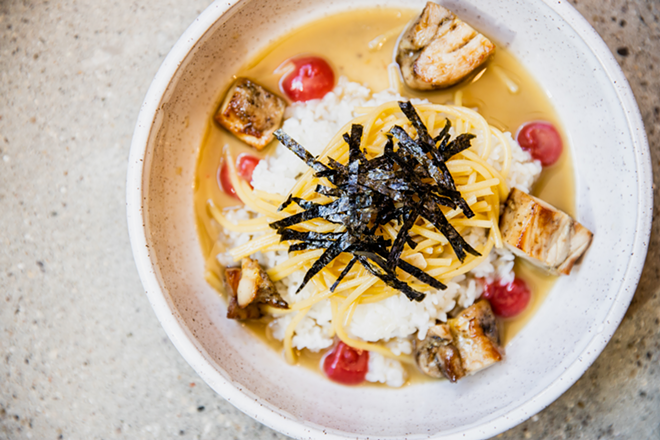 To warm up your pre-ramen palate, try the shishito peppers crowned with fluffy shreds of parmesan cheese and eat them with your hands (there are stems on those peppers for a reason) or the edamame that comes piled high and deep and tossed in sea salt or tare. If you’re looking for punchier flavors, go with the karaage — fried chicken with an option to add bright oroshi ponzu or mellow Jordy mayo (named after Ellerhorst). But you could never go wrong with the gyoza, either pork or mushroom, because both come with a lacy crown of fried cheese. Or the curry pan, a sort of fried bread or dumpling which Hideki has described as a “curry donut,” with potato, onion and carrot.

Don’t expect to have ramen leftovers for tomorrow’s lunch. You likely won’t need a to-go container after a meal here, but you can plan on leaving comfortably full. Kiki doesn’t serve gargantuan bowls of ramen. You know — the ones that constitute two full meals and maybe a snack, too. They serve just enough soup to satisfy and still allow room for a smattering of small plates.

The restaurant is currently waiting on its liquor license and has partnered with neighbor Brink Brewing Co. on a special lemongrass green tea helles that will be served only at Kiki once the first keg is gone from Brink.

All those years in the making have made Hideki and Yuko’s ramen spot worth the wait. Grab a bowl, bring some friends, split the check. Kiki’s just one more reason to venture over to College Hill.