Look Who's Eating: Chef Jordan Anthony-Brown of The Aperture

CityBeat is resurrecting our popular "Look Who's Eating" column, where we ask local chefs and food industry insiders five questions

CityBeat is resurrecting our popular "Look Who's Eating" column, where we ask local chefs and food industry insiders five questions, from where they've been dining to whether they prefer chili or goetta.


Jordan Anthony-Brown is owner-chef of The Aperture, a restaurant slated to open its doors in Walnut Hills (900 E. McMillan St.) in late 2022. Anthony-Brown likes to utilize culinary styles from around the globe, from the Levantine and Mediterranean to the American South. While the Cincinnati native has worked locally with The Baker’s Table and Boca, he got his start in the kitchens of several prominent Washington, D.C. restaurants, including Rose’s Luxury, Iron Gate and 1789.
click to enlarge 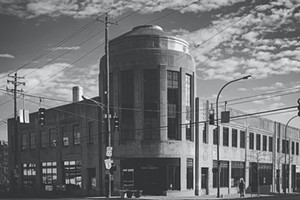 Photo: Instagram.com/theaperturecinci
The Aperture is slated to open in the historic Paramount Building in Walnut Hills.

Anthony-Brown values local, ethically grown produce and proteins and earned his Master's in business management from Wake Forest University. He lives in Oakley with his wife and 1-year-old.

What's your go-to carry-out spot?
Probably every two weeks we get Adeep India in Clifton, right by UC. People ask me sometimes, "What's your favorite restaurant in Cincinnati?" and that's no disrespect to other places, but it’s just so good. If you want to talk about comfort food, I could eat that all day.

What's the last great thing you ate in Cincinnati?
Tikka masala and saag mushrooms (from Adeep India). It’s one of the best things I’ve ever eaten.

Favorite place for a drink — alcoholic or non?
It’s a tie between Bar Saeso and Longfellow. At Bar Saeso, I know the owners and they’ve become good friends … and their wine program is really strong. At Longfellow, well, I put that up against any bar in the country. So, basically, I go to those two bars for different reasons.

Which is Cincinnati's better culinary export: chili or goetta?
Yeah. I won’t get into the chili thing. I grew up here, I get it. I'm not gonna start a firestorm. But some people are confused by it. I’ll put goetta up against anything.

Since it’s Winter: Who has the best soup in Cincinnati?
Again, it’s a tie. Between Mochiko and Pho Lang Thang, you could start a mini-war over ramen versus pho. On a cold day, those are the two places you really want to be.