“Not only are turkeys built like humans, with legs, eyes and a beating heart, they’re also gentle individuals who love their families and feel pain and fear." 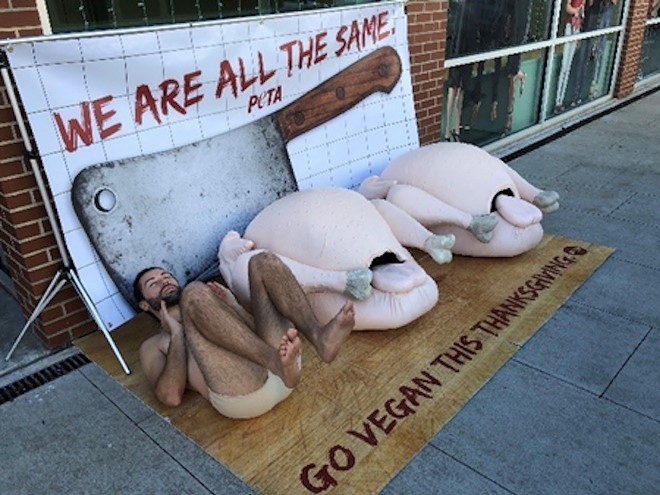 One PETA member is taking a stand against eating turkeys this Thanksgiving by taking a seat (or by lying down, really).

According to a release from the animal rights group, a man wearing nothing but nude-colored underwear will "let himself be 'trussed up' alongside giant 'turkey carcasses' on a huge cutting board, giving passersby food for thought about who they might be featuring on this year’s Thanksgiving table."

The piece of performance protest is taking place as part of PETA's "ThanksVegan" tour, which is making stops across the country. It — and the human carcass — will be at Fifth and Vine streets downtown at noon on Nov. 16.

“Not only are turkeys built like humans, with legs, eyes and a beating heart, they’re also gentle individuals who love their families and feel pain and fear,” says PETA Executive Vice President Tracy Reiman in the release. “PETA’s provocative display provides people with the shock of realization they sometimes need to opt for a delicious ‘ThanksVegan’ feast that leaves fellow Earthlings in peace.”

PETA says more than 45 million turkeys are killed each Thanksgiving.