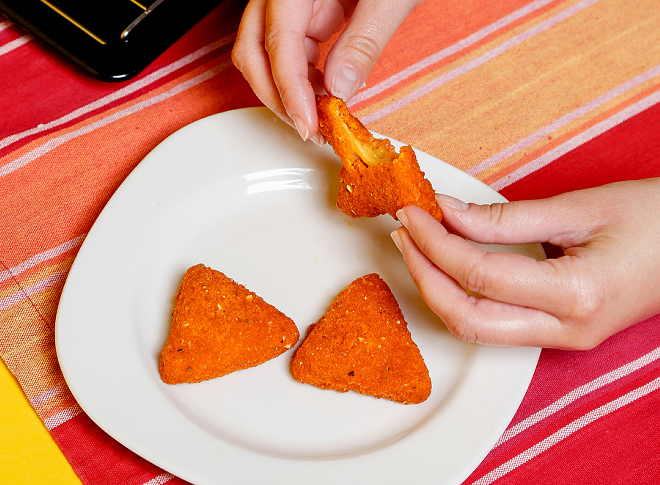 The word “Doritos” means many things to many people. It’s a chip that all of us ’90s kids grew up eating (fun fact: the chips were actually introduced in 1964), and it has grown with us. In Spanish, “doritos” translates to “little golden things.” To me, Doritos are a hallmark of innovation that has changed with the times. Long gone are the ’90s-rific Doritos bags with neon lettering and Star Wars advertisements printed by the nutritional info. It’s 2017, baby, and Doritos knows what millennials want: mock-deep-fried Dorito-crusted cheese sticks.

Officially known as DORITOS® LOADED® Nacho Cheese Breaded Cheese Snacks (whew), Doritos Loaded emerged gracefully upon the food scene. There was none of the Taco Bell Doritos Locos Tacos fanfare. I would not have known about this culinary creation were I not a woman who spends most of her days wistfully walking up and down the frozen single-meal section at Kroger.

The concept of an entire eight-serving package of Doritos Loaded ($4.99) being a meal for a single person is the most flattering compliment that Kroger has ever bestowed upon me. I recently grabbed a box, as well as the Velveeta Original Cheesy Bites ($4.76) next to them. The Cheesy Bites looked like a frozen version of the ever-popular deep-fried macaroni and cheese that has become a darling of TGIFriday’s everywhere. I skipped over the Doritos Cool Ranch Loadeds and the Velveeta Salsa Con Queso and Grilled Cheese flavors, not sure if I dared to tempt the universe so boldly at this time.

I settled into my evening with a glass of whiskey on the rocks and my oven preheating. The cooking directions are simple; you don’t even need to grease the cookie sheet for either of the frozen dairy foods. I emptied half the bag of Loadeds and half the bag of Cheesy Bites onto a tray and stuck it in the oven. I turned on Ghost Adventures while the cheese products cooked, as nothing could be more terrifying than what I was about to put into my body. Both Doritos Loadeds and Velveeta Cheesty Bites take 10 minutes to cook.

Due to the time-sensitive nature of the scenario, let me give you a minute-by-minute rundown of how the consumption of these “foods” went down:

Minute 1: Upon taking the tray out of the oven, I see both Doritos Loadeds and Cheesy Bites have exploded all over my cookie sheet. I mourn having to wash the tray later, but the glistening cheese reels me back in. I transfer the cheese sticks onto a tray and go back to my sofa, as these are not foods to be eaten in a chair at a dinner table.

Minute 2: Both Loadeds and Cheesy Bites are breaded molten lava pockets. I try to eat a Doritos Loaded and a tear runs down my cheek as my mouth scorches.

Minute 3: Finally, the Cheesy Bites are ready to be eaten. If you are a fan of neon-yellow Velveeta cheez, you will love Cheesy Bites — they are just deep-fried Velveeta rounds. I’m both disgusted in the lack of macaroni noodles and disgusted at my own disappointment over the lack thereof.

Minute 4: I’m now able to eat a Doritos Loaded without weeping. The triangles are thicker, the cheese a bit chewier. The Doritos crust accents the cheddar/mozzarella/whatever cheese on the inside — a sentence that I never thought I would write.

Minute 5: The cheese of both Loadeds and Cheesy Bites is hardening. I am now in a race against both my body and time to finish.

Minute 6: The Ghost Adventures crew swears that a possessed doll on Doll Island actually giggled, and I lose a whole minute that the cheese sticks are edible watching the rewound footage of the doll.

Minute 7: Both Doritos Loadeds and Cheesy Bites now have the interior texture of a cup of refrigerated grocery store snack pudding. I try, meekly, to nibble at the corner of a Loaded and am now crying for another reason entirely.

Minute 8: I dump the rest of the Loadeds and Cheesy Bites into the trash.

The next 30 minutes are spent scrubbing the cheese explosions off my cookie sheet. Do I regret it? No. Not even when, an hour later, it felt like I had swallowed an entire bottle of Elmer’s Glue. In the words of Frank Sinatra: “Yes, there were times, I’m sure you knew/When I bit off more than I could chew/But through it all, when there was doubt/ I ate it up and spit it out/I faced it all and I stood tall/And did it my way.” ©