Bootsy Collins to Perform on Stage for the First Time Since 2019 During Bengals vs. Ravens Halftime Show 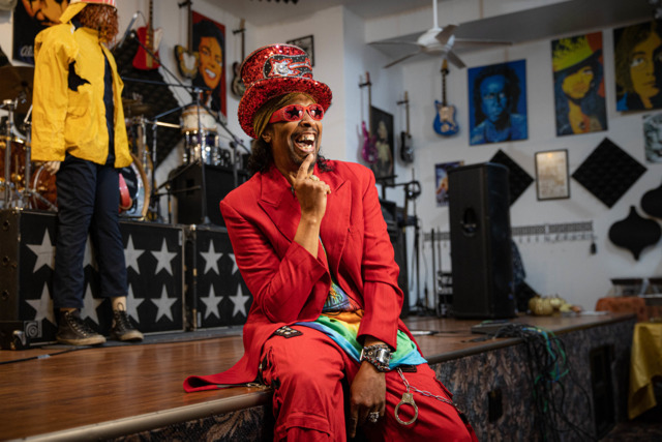 Photo: Hailey Bollinger
Bootsy Collins will be performing for the first time since 2019 during Cincinnati Bengals vs. Baltimore Ravens game on Jan. 15.

With practically the entire city funkin’ pumped for another Bengals playoff run, there’s only one man who could serve as the unofficial grand marshal for Cincinnati's celebration: Bootsy Collins. As part of the festivities, Collins will perform during the  Cincinnati Bengals vs. Baltimore Ravens halftime show on Jan. 15.

First, however, he’s paying tribute to Elbert L. "Ickey" Woods, and the overwhelming sportsmanship the Bengals and Cincinnatians display each week.

Long before the Bengals “hit the griddy” in the end zone, one very important and well-loved Bengal did a celebration dance that has never been forgotten.

Woods was a fullback for the Bengals from 1998 through 1991, and at the start of his career, he promised his mom he’d do a dance if he scored a touchdown. True to his word, when Woods scored a touchdown during a game against the New York Jets on Oct. 10, 1988, he did a dance to celebrate. After taking heat for the overly simple dance, he spruced it up, added some more steps and “premiered” the official Ickey Shuffle at the next game.

The dance caused the NFL to make the “Excessive Celebration” rule in response, but it was much too late. Since that 1988 dance, the Ickey Shuffle has become a part of sports and pop culture. Woods has said most of the money he has made from appearances and doing the dance has gone directly to his Jovante Woods Foundation, which aids asthma research.

Woods already had a dance, sure. But, what the legendary Bengal really needed was a song. And thanks to Collins, he finally has one.

Collins announced the release of his song “The Ickey Shuffle” on Jan. 13.  According to a press release, the song is "a tribute and unifying statement to encourage sportsmanship, funk and peace.” The accompanying video features Collins, his son, Ouiwey Collins, the Ben-Gals and, of course, Woods.

Back in October, on his 71st birthday, Collins announced that he was putting together a forthcoming collaborative compilation album project titled Funk Not Fight. The album pools talent from emerging artists whose music will be featured alongside Collins’ own funky contributions and, according to a press release, will also include Lettuce, Buckethead, Zapp, Triggy, Syleena Johnson, Tommy Davidson, Hi-Tek, Deanna Brown, G7, Michael Dyson, Steve Lacy and more.

The funk doesn’t stop with the music video. Collins will be performing at Paycor Stadium at halftime during the Bengals vs. Ravens playoff game on Jan. 15. The performance was originally scheduled to take place during that fateful Buffalo Bills game on Jan. 2 when Bills player Damar Hamlin collapsed on the field in cardiac arrest.

Now, however, Collins's first time on stage since 2019 will be even bigger and more special than before as fans celebrate a return to the playoffs and the great news of Hamlin’s recovery.

There’s a lot to celebrate in the jungle this week, Bengals. Start practicing your Ickey Shuffle and your Who Dey chant!

Watch the music video for "The Ickey Shuffle":