According to Heavy Hinges, 'Cellophane Rose' contains the band's most unified sound to date. 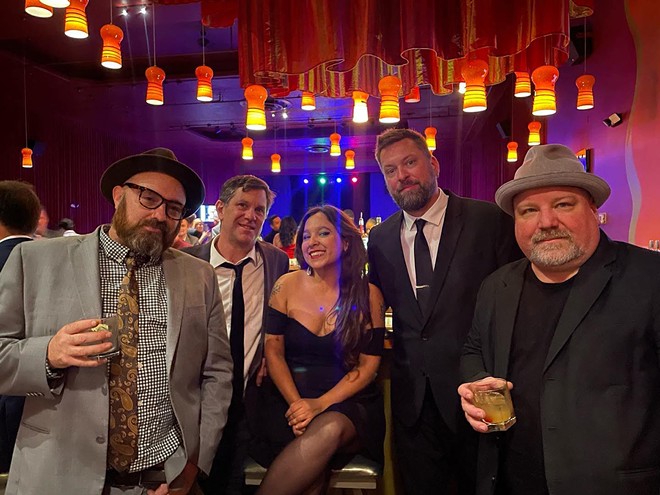 For a band to continue to grow and evolve, it sometimes needs to dial things back. Expansion of one’s sound can pay off, but it is retention of the elements that make up a band’s core identity that truly carries them forward in the long run.

Heavy Hinges, the Cincinnati-based indie rock band, have long been lauded for their expansive influences over the past 11 years, with elements of gospel, soul and other worldly sounds all coming together in one exuberant melody. It is on their upcoming release, Cellophane Rose, that the band has perhaps taken the next big step forward in their overall journey by taking a small step back to allow for some self-reflection.

The band (vocals/ukulele: Mayalou Banatwala; guitar/vocals: Dylan Speeg; guitar/vocals: Kirk Hunter; bass: Andrew Laudeman; drums: Brian Williamson) have come together to dial in on what makes their sound their own by crafting a record that showcases a more unified offering while still carrying the undeniable Heavy Hinges excitement and vivaciousness.

Citybeat: How does Cellophane Rose grow the Heavy Hinges sound and set it apart from your prior releases?
Banatwala: It’s the most cohesive sound we’ve had; this is the most that we’ve completely worked together on an album instead of bringing individual pieces [of songs]. There’s this heavy theme of heartbreak and uplifting positivity as well as lighthearted tunes. This one also has a kazoo solo, which is really fun.

CityBeat: How does it feel to be back in the studio after three years away?
Banatwala: It feels great. We’ve been a band for 11 years and this is the most confident and easy recording I’ve ever had. There’s a song that I only did one take on because I knew it was the one. I’m super invested in these songs. Some were written over the pandemic, so it’s a lot of reflection on how we were feeling as a band over the pandemic. We recorded at Fuzzy Eyed Studio … it’s a nice, slightly grungy sound. It’s more of a raw sound.

CityBeat: It feels like we’re beginning to hear all the songs and albums that grew during, and were inspired by, the pandemic.
Banatwala: Right, as soon as we felt comfortable practicing with masks on, we went back to practicing. Rain or shine, we’re at practice every Wednesday for 11 years, so it was nice to be back in the same space together.

CityBeat: Was there a shift in thinking or process during the recording of the new album?
Banatwala: I feel the most cohesive in our sound where [previously] we had jumped around, touching on twang tunes, or some kind of gospely sound, this just feels completely like indie rock. It’s rock. This album flows together really well.

CityBeat: How important is it for you to deliver a top tier live show experience every time you perform?
Banatwala: It’s the most important. I think we try to upstage ourselves every show. I, personally, only want to give energy and feel energy back from the audience. I feel like we’ve always had really high-energy shows and I’m always just trying to bring more energy and more crowd participation. The music and the writing and the musicianship is as important as how we’re performing, but the stage presence is really important to me.

CityBeat: In addition to the cohesiveness we’ve discussed, how do you think the band has grown since you first formed 11 years ago?
Banatwala: I would say that our artwork has been more consistent. Dylan’s (Speeg's) artwork was amazing in the beginning, but he was trying out a lot of different stuff. Now he does spray-painted stencil posters and I feel like that uniforms what we are presenting to everybody.

We are also sticking to a genre more nowadays. On a personal level, I’m more serious about my ukulele. I don’t play acoustic ukuleles; I custom-built a hardbody uke that is as solid in construction as a really solid electric guitar. That’s another thing that I like on this album — my instrument is 10 times better than any other recording I’ve had because it’s built really well. We’ve also fine-tuned the way we write songs and there’s a second nature to how we work together. It’s just easy. We’ve been doing it so long. Writing a song, it just pours out of us.

CityBeat: What’s next for Heavy Hinges?
Banatwala: We’re working on a music video for the album’s title track, so we’re storyboarding that. And we’re always writing songs, so we have a couple more that we’re looking to release as singles in January. It just keeps going. I like it!

Heavy Hinges is releasing Cellophane Rose on Dec. 17 across all platforms. They will be holding a record release show on Dec. 17 at Northside Tavern, with Go Go Buffalo and Hello Sapiens in support. For more information, visit heavyhinges.com.