Minimum Gauge: The All "Baby, It's Cold Outside" Controversy Edition

People got mad when a Cleveland radio station (and others that followed suit) removed the holiday song from its playlist for being too rape-y, but there's a consent-friendly version just sitting there ready to take its place 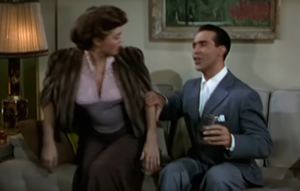 Cleveland, Ohio Christmas-music radio station Star 102.1 has removed “Baby, It’s Cold Outside” from its playlist this season. For years, many have pointed out how the duet’s lyrics about a woman trying to leave a date (and a man trying to convince her to stay) haven’t held up well since the song emerged in the ’40s (it first appeared in the 1949 film Neptune’s Daughter, for which it won the 1950 Oscar for Best Original Song). The station said it made the decision after examining the words more closely following a listener complaint that referenced the #MeToo movement. The song’s banter (like “I really can’t stay” and “Say, what’s in this drink?” to which the male protagonist responds with stronger come-ons) has been compared to a date-rape scenario; in 2015, Saturday Night Live had Bill Cosby (played by Kenan Thompson) singing the song in a spoof that hammered home it's inappropriateness. Some have decried the station's decision as another example of “PC culture run amok,” but “Baby” appears to be going the way of other awkward cultural artifacts that fell out of favor as American society has progressed. And just as with things like black "lawn jockey" yard ornaments and various slurs and epithets throughout the decades, it's not going without a fight (see below). The controversy has also spawned approximately 800,000,000 think-pieces that cover the gamut of opinions — from "the song is bad" and "it's not bad at all" to "actually, it's feminist," "hating on the song is hurting the #MeToo movement" and "well, that Pogues song is offensive, too!"

Perhaps Star 102.1 will pick up Lydia Liza and Josiah Lemanski’s clever re-imagining of “Baby, It’s Cold Outside.” The Minneapolis musicians’ version of the song turns it into a playful consent anthem — instead of obnoxious coaxing, the man responds to the woman’s uncertainty kindly and reassuringly. It’s done with humor: “Baby, I’m fine with that,” Lemanski sings up front, later, answering “What is this drink?” with “Pomegranate La Croix.” The young singer/songwriters actually released the song in 2016, donating proceeds from sales and streams to organizations like RAINN, Sexual Violence Center of MN and the National Center to End Sexual Violence. It’s currently getting another promotional push for the cause. Stream it here through Spotify, where it has been a top viral hit the past two Decembers; it’s also on iTunes, Apple Music and Amazon. A live video of the twosome performing the song on Minneapolis radio station The Current has also been seasonally viral, garnering 6 million views on the station’s Facebook page alone.

COLD: Backlash to the Backlash

When a few other radio stations decided to follow Star 102.1’s lead and not play “Baby, It’s Cold Outside,” the aforementioned anti-PC social injustice warriors and other big fans of the tune were outraged. While a Canadian station said it received mostly positive response to its decision to take the song out of holiday rotation, others in the less-polite part of North America didn’t take kindly to losing their “Baby.” A Denver station completely reversed its decision, saying the overwhelming feedback after the song was removed from its playlist was in support of keeping it on the air. A San Francisco station stopped playing “Baby,” but when listeners complained, it decided to put it up for vote in an online poll. That’s what Star 102.1 ended up doing and there seems to be a campaign pushing to bring the song back; a poll on the Cleveland station’s website initially was supportive of keeping “Baby” off-line, but a more recent Facebook poll has reportedly been flooded with support for the song. And if we’ve learned anything about Facebook in the past couple of years, it’s that nothing nefarious with voting or fake users or propaganda ever happens on its platform. Right? The best response to the controversy was from a former radio programmer, who wrote a social media post about how “Baby, It’s Cold Outside” had been pulled from stations he worked at going back over five years ago and that it was a fairly common occurrence. “We didn't turn it into public debate, or turn it into a ratings stunt," Tony Lorino wrote in a Facebook post, according to USA Today. "We just knew it was the right thing to do for the audience we served and quietly removed the song from the playlist." That, in a nutshell, is what the "controversy" is mostly about at this point. "Baby, It's Cold Outside" is providing a rush of easy content, publicity and "hits" for press, radio and TV outlets starved for (and often mandated to generate) better numbers (full disclosure: including this one).