With punk-rock artists and a DIY ethos, the local record label is thriving. 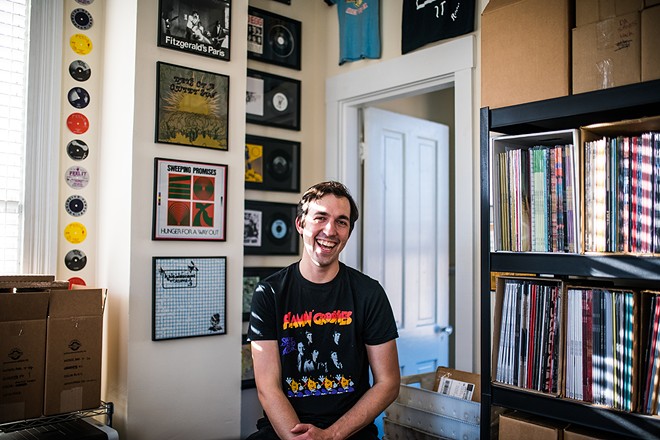 The idea of a music label as a community-building endeavor with a signature aesthetic is alive and well in Feel It Records. Founder and lone proprietor Sam Richardson started the label as a university student in Richmond, Va. in 2010. Nearly 13 years and a recent relocation to Cincinnati last summer, Feel It has become a respected go-to source for those interested in the punk genre and its multifarious offshoots — post punk, indie, dark wave, trash pop, garage rock and more.

Feel It Records’ well-curated catalog features dozens of in-print LPs, 7-inch singles and even the occasional vintage reissue. Check out Cincinnati’s own purveyors of icy industrialized atmospherics Crime of Passing, whose haunting 2022 self-titled record lodges itself into one’s subconscious whether one wants it there or not.

Then there’s Kansas-based Sweeping Promises, whose stellar 2020 full-length debut Hunger for a Way Out recalls The Go-Go’s by way of The Slits, as unconventional hooks surface amid rudimentary beats and zig-zagging guitar and synth lines, all anchored by the fizzy vocals of frontwoman Lira Mondal. The trio’s equally ear-wormy latest single “Pain Without a Touch” dropped in November as a collaboration between Feel It, which is handling the domestic release, and Sub Pop Records, which is overseeing the rest of the world. A new Sweeping Promises full-length is set for release in the near future, and there’s sure to be more from elsewhere within Feel It’s ever-expanding roster universe.

“I didn’t have this kind of expectation for it,” Richardson tells CityBeat about the label’s relative success. “It was definitely more of a hobby label [at the beginning]. I had some friends I was lucky to have right down the street from my dorm room who had a record store called Vinyl Conflict. The original owners had a label called No Way Records that did a lot of hardcore and punk stuff that I was into. They were a good source of information on how to get something off the ground and bounce questions off of.”

There’s a rich history of DIY ingenuity in the punk scene, and that tradition is a big part of Feel It’s approach to music. It’s also one Richardson has seen as a member in his own various bands over the years.

“Through touring I met a lot of new people in bands,” he says. “I think the idea of making it a larger thing than just a regional hobby label kind of came to mind through that. Feel It started putting out five records a year, then 10 records a year. Then last year it was 15. And I have a crazy year lined up now [for 2023].”

Among the new releases are efforts from Cincinnati-based bands like The Drin, Corker and Beef, in which Richardson plays guitar. The quality of the current crop of local outfits — including The Serfs, which specialize in a jagged, art-damaged version of electro-dance music, as well as scene mainstays Vacation and others — was enough to convince Richardson to move his operation to the Queen City from Richmond. Ready for a new creative environment, he bought a house last spring that doubles as Feel It’s current headquarters on the West Side of Cincinnati.

“I love it here,” Richardson says. “I really like the community. I’m from a smaller town to begin with, so I was thinking, ‘Where would I go with the label?’ It just feels right here. I met a lot of cool new friends. The music scene is really happening right now.”

Dakota Carlyle is a central figure in the scene. As a member of The Serfs, The Drin and Crime of Passing, he’s seen things build over the last several years. Carlyle was a fan of the stuff Feel It was putting out and in 2021 decided to email Richardson out of the blue to see if he would be interested in releasing the Crime of Passing record.

“We started making it in December of 2019,” Carlyle says. “And then with the pandemic, everything just got really delayed for a long time because of the virus itself and the mental state that put me in. I cold-emailed Sam. I never met him or knew who he was at all. It was a bit of a crapshoot. He emailed me back and loved it. And then we talked on the phone a bit and planned everything out with the record.”

“When The Serfs were touring a few months later, we went to Richmond where he was at. That was the first time that I actually met him,” Carlyle continues. “He moved here a couple months after he stayed at my place. It happened really fast.”

Richardson says it was a no-brainer to release the Crime of Passing record.

“I just really love what they did with it,” he says. “There’s so much texture. They’re able to cross between so many little sub-facets of the genre. I would say that it’s the most popular thing I put out in 2022.”

There’s a desolate, almost spooky vibe to Crime of Passing’s music that is at once hypnotic and alienating. That approach is also apparent in what Carlyle does with The Serfs, which recently announced their first European tour.

“Desperation is very clear in a lot of the music that we make,” Carlyle says of the influence his surroundings have on his art. “Until recently, it’s always sort of fallen on deaf ears. Flyover country is a bit of a joke to coastal cities. I think that was always motivating in its own way. I think just the industrial living in Cincinnati has had a large impact on the music we make. I mean, I work in a warehouse. I live in a warehouse. There’s a lot of freight elevators. Those sounds have definitely found their way into the music.”

Richardson agrees that the area has its own unique take on underground music. That, coupled with the lower cost of living and real estate, was a big reason he decided to move to Cincinnati.

“There’s a reflection of how gray it can be out here in a lot of the music,” he says. “The Midwestern ethic is a little more down to earth. I don’t think there’s as much of people necessarily trying to fit into a genre. You’ll look at some bands from New York that are just doing nothing to rewrite or be original with their music.”

I feel like there’s a lot of great musicianship here,” Richardson adds. “People have time to go about their art, whereas in other places you have to work three or four jobs just to pay your rent. That’s kind of reflected in a lot of these projects where people have more time to think about their art and rehearse and get it out there.”

Richardson says a move to a stand-alone space with a warehouse and maybe even a few paid employees is in Feel It’s future, as is his continued commitment to release music he believes should get more attention in the wider world.

“The first basically 10 years of the label, I was a pizza delivery driver on the side and just did the label when I could,” Richardson says. “I toured in a bunch of bands, too.”

All that came to a grinding halt during COVID. But there was a silver lining to the shutdown — it gave him the ability to work on the label full time, which led to multiple fruitful collaborations.

“That Sweeping Promises LP really helped the profile of what I’m doing,” Richardson says. “It sold really well, and it also led to some cool submissions to come my way. I get exceptional submissions. I don’t know if you can say that about every label out there. I really feel like there are people making music that are seeing what I do and are impressed and want to send it my way. That keeps me inspired to keep doing it, for sure.”