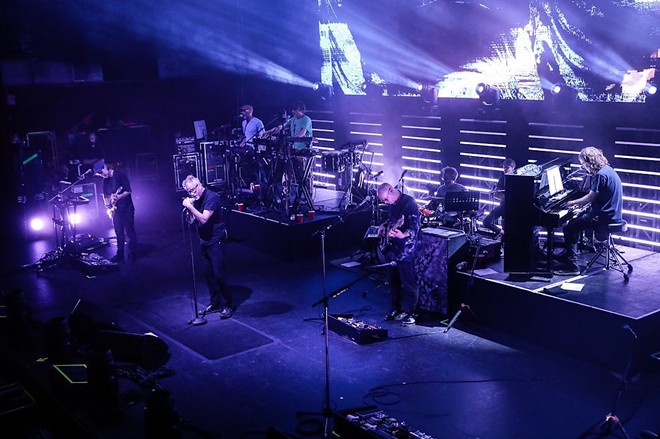 A number of musicians have been skipping Cincinnati on their tours lately. Madonna's career retrospective tour isn't coming here. Reba McEntire rejected the Queen City – twice. And now homegrown talent The National appears to be turning its back on us.

The National dropped a tour announcement on Jan. 18, with 19 dates in North America and 10 dates in Europe and the United Kingdom. The tour kicks off in Chicago on May 20 and will see support from Soccer Mommy and The Beths, plus punk's enduring goddess Patti Smith will join the band for a show at Madison Square Garden. Some tour locations even will get multiple dates.

But Cincinnati is missing from the itinerary. Yes, again.

The Cincinnati-bred band – Aaron Dessner, Bryce Dessner, Bryan Devendorf, Scott Devendorf and Matt Berlinger – also toured in 2022, playing individual shows and several major festivals throughout North America, including the Sound on Sound Festival, Newport Folk Festival, Pitchfork Music Festival and more. Fans had hoped that the band would slip a Cincinnati show onto the schedule at a later time, but no dice.

But perhaps Homecoming will return? The Cincinnati festival curated by The National has not yet announced its dates for 2023.

Launched in 2018, Homecoming takes place in Smale Riverfront Park along the Ohio River and typically features two nights of music, with The National taking several performance slots themselves.

The most recently scheduled Homecoming was to have happened in May 2020 but was canceled due to the then-new COVID-19 pandemic. "We made every attempt to reschedule Homecoming for 2020, however due to circumstances beyond our control, the festival will not take place this year as planned," The National's statement at the time said. "We look forward to bringing the event back in 2021."

Unfortunately, Homecoming did not take place in 2021, either, as the pandemic continued to rage on thanks to the fast-spreading Delta variant of the coronavirus causing a months-long surge of new COVID-19 cases and hospitalizations throughout the summer, fall and early winter.

When the alt-indie-rock stalwarts posted tour dates for 2022 with Cincinnati conspicuously absent, fans and media anticipated that a Homecoming return was imminent. But no such announcement happened, and CityBeat received no updates on the local festival from band representatives or festival text alerts.

Currently, the Homecoming website says "Homecoming 2023: For updates about future dates for Homecoming please join the mailing list!" The message is the same as what was posted in 2022.


An album on the way

"This is my favorite record we have ever made ...for many reasons (more on that later)," Aaron Dessner shared in a Jan. 18 Instagram post. "And I feel so grateful that it came together in the way that it did."


"We had so much help making this record what it is but I want to thank our dear friends @taylorswift @phoebebridgers and Sufjan for joining us and contributing so magically," Dessner said about First Two Pages of Frankenstein.

Members of The National frequently collaborate with other musicians, both as a band and as individuals. Notably, Dessner has worked with Swift numerous times, producing and co-writing her 2020 album Folklore and its follow-up Evermore and re-recording versions of Fearless and Red. Dessner also produced several songs on Swift's 2022 album Midnights, with fellow National members Bryce Dessner and Bryan Devendorf also contributing.

In January 2022, Dessner came to Swift's defense after Blur and Gorillaz singer Damon Albarn suggested during an interview with the Los Angeles Times that Swift doesn't write her own songs. In response, Dessner tweeted, "Not sure why you @Damonalbarn would try to discredit Taylor's brilliant songwriting but as someone who has gotten to press record around her ...your statements couldn't be further from the truth...you're obviously completely clueless as to her actual writing and work process."