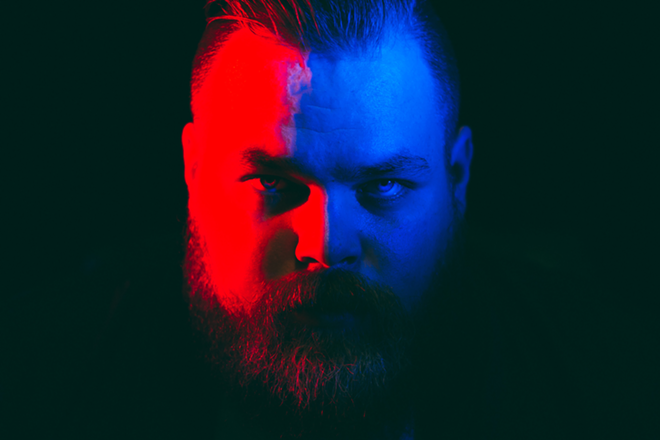 Seth Haley doesn’t have a musical identity crisis. When he arrives at a creative juncture that requires a different solution, he simply crafts a new identity.

Since beginning his Synthwave career a dozen years ago, Haley has recorded under a variety of banners, including Sarin Sunday, SYSTM and Airliner, all of which have enjoyed a certain level of acclaim and recognition. Three years into his musical journey, Haley, who had been a full-time graphic designer and art director and part-time Electronic hobbyist, released 2010’s Cyanide Sisters, his first project under the name Com Truise.

Like Haley’s other pseudonymous works, the Com Truise catalog was conceptual, telling the story of a “synthetic astronaut” named, conveniently enough, Com Truise, and his struggle to free himself from an oppressive totalitarian society. The story finally wove its way to a conclusion on 2017’s Iteration, after three albums and three EPs.

Haley acknowledges that his science fiction tale was somewhat fluid over the course of its telling.

“It was definitely a bit of self-dictation,” he says. “You take breaks and lose track of stuff. Before every release, I would write a couple of paragraphs and then I’d try to stick to that, but I didn’t really know where it was going from the get-go.”

After wrapping up his story arc on Iteration, Haley toured the album and then took a little personal time to reflect and process. He’d met a woman and fallen in love, and the pair eventually moved from Los Angeles to Orlando, Florida, where Haley has set up his new studio stocked with completely new hardware and software, necessitating a good deal of self-training.

The personal reflection and the time spent learning how to operate his new set-up ultimately led Haley to create his most intimate album to date, the recently released Persuasion System.

“It’s more of its own story,” says Haley. “It’s my take on my current life situation. I don’t really write about that stuff, especially with the early efforts. I had the (sci-fi) story to keep me on track. This was my first release where I didn’t focus on a story and instead let myself accept my immediate surroundings to influence me. Moving across the country and starting a new life with a person is pretty heavily in there.”

Given Haley’s penchant for new identities when he concocts a fresh sonic approach, it might have seemed logical to forge a new pseudonym for an album based on his actual life. He might well have done just that, except for his legal obligation to his longstanding label, Ghostly International.

“It was a contractual agreement,” Haley says with a laugh. “This was supposed to be an EP, but I ended up with these older extra tracks, and I said, ‘Let’s do a kind of extended EP.’ Then there’s one more record with the current contract with Ghostly, so until then, I will be Com Truise.”

A fair amount of Persuasion System consists of tracks Haley created along his six-release conceptual arc that didn’t fit the narrative he envisioned. With a little work, they dovetailed nicely with his new songs.

“Some of the (Persuasion) tracks are actually older ideas that have been kicking around and didn’t really have a home, so I thought I’d refresh them,” Haley says. “I was really excited about the tunes, but they just didn’t fit anywhere else. It’s about 50-50 (old and new songs), actually.”

Haley’s musical and graphic design evolution go hand in hand. As a teenager, he was exposed to Electronic music via cable television, leading him to ask his parents for turntables for Christmas. He began making his own Drum and Bass tracks and eventually had an online radio show, for which he designed his own flyers and advertisements. Haley was self-taught in all of his disciplines; his only practical education was in web development and he quit because he wound up teaching the teacher.

“I wish I’d toughed it out just to have done it,” he says. “I went deep into graphic design, but I was doing both for so long as hobbies. I thought, ‘Maybe this is something I could do as a career,’ and I got a job and then music took over years later.”

Haley acknowledges that Com Truise and his other various entities are by and large considered Synthwave by virtue of their slim proximity to the genre’s characteristics. But cites fairly broad influences when talking about his work, and almost none of them include things from his recognized genre.

“I draw from all over the place,” says Haley. “Definitely a lot of film scores: John Carpenter; the Alien films; Blade Runner. I wasn’t necessarily inspired by the ’80s but by the sound of the ’80s. I like ’80s music now but I hated it when I started. I just liked the drum sound. I got really into Funk, I love Bruce Hornsby and Boards of Canada, but I don’t listen to much Synthwave. I want to stay uninfluenced by it. I’ve always been on the fringes of it anyway.”

As a graphic designer, Haley conceives and executes his music from a visual perspective; a good deal of the Com Truise catalog has an expansive and cinematic feel, reflective of his avowed influences. His new live presentation is rife with projections and visual translations of the accompanying music. Given the breadth of his catalog, the challenge continues to be faithfully representing his oeuvre to his fervent fan base.

“I play a pretty good cross-section of my catalog,” Haley says of his live show. “I’ve got to hit every base. I get people every night yelling out songs I haven’t played in forever, but I think what I play currently is a pretty good representation. I’m always adjusting it, and getting an itch to put in something new and making new visual content for it.”