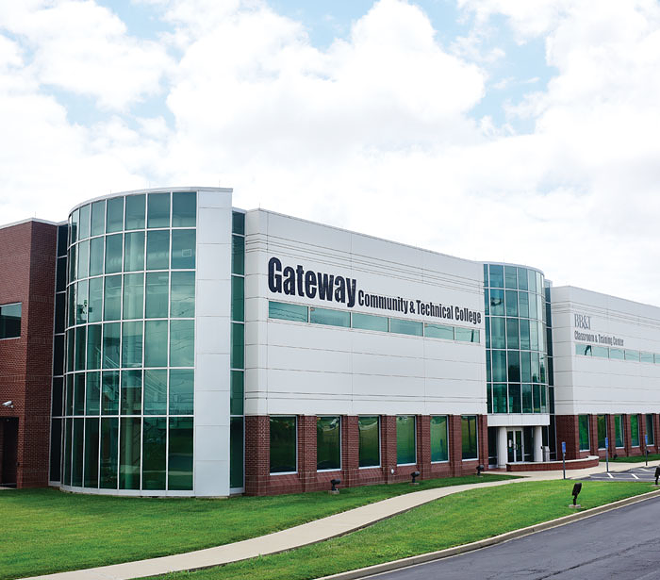 Photo: Jesse Fox
Gateway Technical and Community College has seen controversy over its treatment of faculty.

After taking a stand over what he says was gender discrimination against a fellow employee, a former professor at one of Kentucky’s largest community college systems claims he was shown the door.

The suit could present another difficulty for Gateway, which is part of the Kentucky Community and Technical College System, the state’s two-year community college system. KCTCS has weathered questions during the past year from the state’s attorney general about its performance, administration and board of directors.

Gateway deferred questions about the case to KCTCS officials, who did not give any comment about the lawsuit. The school has filed a motion with the district court asking it to dismiss Shearer’s legal action, saying that KCTCS is exempt from the suit as a government agency and that Shearer’s firing doesn’t amount to constitutional violations because his complaints about Fritz’s treatment can’t be proven to be a matter of public interest.

Shearer’s attorney, Suzanne Cassidy, said the plaintiff’s team had no further statements about the case beyond the complaint.

Shearer began working at Gateway in 2006, left between 2010 and 2012 and resumed teaching at the school at the end of that year. His lawsuit says that he began complaining about Fritz’s treatment in February of 2014, telling higher-ups within the school — including former Gateway President Dr. G. Edward Hughes, who is named in the suit — that Fritz was not being reviewed in the same way male professors at the school were. Shearer also backed up Fritz’s own assertions about her mistreatment, according to the legal complaint filed May 24.

“Ms. Fritz was being evaluated more harshly than male employees despite her excellent performance, which equaled or exceeded that of her male colleagues who, nevertheless, received higher ratings than Ms. Fritz,” the complaint reads.

By the fall of 2014, those complaints led to a meeting with school administrators about Gateway science technology and mathematics division chair Dr. Yohanes Honu, who Shearer and Fritz claimed was responsible for the discrimination. The suit claims the school brushed off these complaints and a subsequent January 2015 email to then-provost Margaret Stallmeyer.

Shearer escalated his complaints to an unnamed associate dean at the school in the spring of 2015 and again received little response, according to the suit. Shortly after, the suit says, Shearer received lowered performance reviews, getting a rating of “meets expectations” instead of previous ratings of “exceeds expectations.” He was subsequently told he would no longer be employed at the school at the end of June 2015 despite having a contract with Gateway that extended until the end of this June. He claims in the suit that he filed an appeal via processes set out by KCTCS but received no response.

“The downgraded evaluation was in direct retaliation for his criticism of the discrimination against Professor Fritz, his related efforts to seek removal of Dr. Honu for such discriminatory treatment and the related hostile environment Honu had created,” the suit reads.

Shearer claims he wasn’t notified as to why he was being fired, given evidence for the decision or provided a venue in which to appeal his dismissal. His suit alleges Gateway violated federal Title IX statutes against gender discrimination, the First Amendment for punishing him for speaking out about Fritz’s treatment and the Fourteenth Amendment for violating his right to due process.

Attorneys with Louisville-based Bingham Greenebaum Doll LLP, who are representing KCTCS, disagree. Filings with the district court by the attorneys do not address whether Shearer was fired for sticking up for Fritz, but claim allegations that KCTCS violated the constitution when it fired him are unfounded.

“Shearer’s claimed First Amendment rights are not clearly established because he did not engage in constitutionally protected speech as defined by First Amendment jurisprudence relating to public employees,” they wrote in the school system’s response to the lawsuit. “More specifically, Shearer cannot demonstrate that his speech involved matters of public interest or concern.”

Both Shearer and Fritz have been popular professors at Gateway. Fritz has a 4.3 rating out of five on the popular site ratemyprofessor.com, while Shearer has a 5.0 rating. In 17 ratings since 2011, students praised Fritz’s command of the subject matter she taught. Low ratings centered around the difficulty of the class.

“The class is HARD,” reads one anonymous review from February 2014, right around the time Shearer began complaining about Fritz’s treatment. “No doubt about that. But she makes it interesting to learn and she’s very helpful; you just have to make sure you keep up. She doesn’t sugar coat the difficulty of the subject, she’s very straightforward about everything. I would definitely take her for another class if given the chance.”

Recent reviews dating all the way up to last month give Fritz similar praise. Shearer has fewer reviews on the site — only three  — but those also praise him as a professor.

Shearer’s dismissal brought a crowd of more than 50 students and faculty to Gateway’s board of directors meeting Aug. 6, 2015. Many spoke emotionally about Shearer’s firing and about what they said was a lack of transparency from the school’s administration about personnel decisions.

“When you can decide solely who gets hired and who gets fired, that’s a dictatorship,” Ray Snedicor told Hughes, according to The Cincinnati Enquirer.

KCTCS legal counsel later sent a letter to board members criticizing them for letting students speak publicly in the board meeting about personnel matters, saying it opened board members up to legal action against them.

The meeting was tumultuous for other reasons. Board president Jeff Groob highlighted concerns in the community that the school wasn’t preparing graduates for local jobs, as well as complaints from faculty about unfair school policies. Those included Gateway’s practice of notifying professors on year-to-year contracts about whether they would be employed for the next school year in July, just a month before classes start.

Groob said that approach makes professors at the school “like disposable fast food workers,” according to The Enquirer.

KCTCS and Gateway point to state budget cuts that have trimmed tens of millions of dollars in funding for the community college system as the reason for the layoffs and short notices.

Other drama has swirled around Gateway over the past year, including a fight between the school and KCTCS about whether or not the former’s board, headed by Groob, properly evaluated its then-president, Hughes. Hughes retired from Gateway in September of 2015, receiving a $400,000 bonus after he left. According to KCTCS, which rejected the board’s evaluation of Hughes, the board didn’t complete the evaluation in the proper manner. Gateway’s board disputes that.

Meanwhile, Shearer’s suit looks to move forward as the summer goes on. The plaintiff’s attorneys say they will respond to KCTCS’ request for dismissal as the court weighs the case.  ©