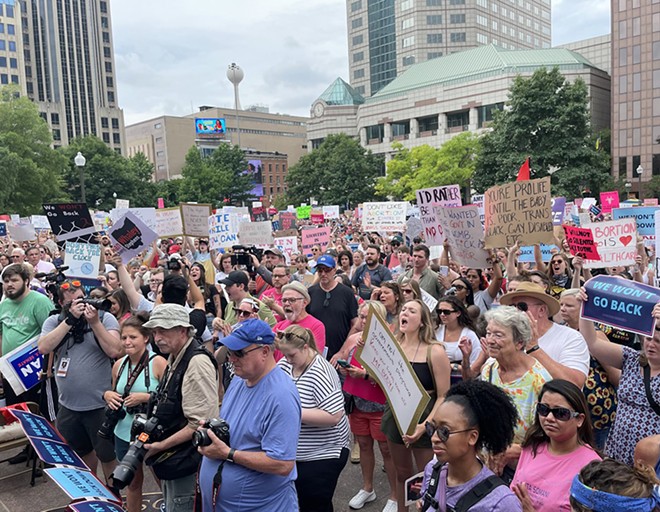 Over the weekend protesters rallied in demonstrations large and small voicing their opposition to the U.S. Supreme Court’s decision overturning Roe v. Wade.

On the afternoon of Saturday, June 25, a couple dozen people gathered near the end of a sleepy street in Beechwold. Demonstrators brought bullhorns, pots and pans, even a vuvuzela, and organizers handed out pamphlets describing what areas are and aren’t public property. Then they marched up a narrow side street to Attorney General Dave Yost’s home.

“After his workday, he comes home, kicks his feet up, has real nice evening,” organizer Mandy Shunnarah-Reed told the group before they set out. “Meanwhile, the rest of us have to live with the consequences of the decisions he’s made about our bodies and our livelihoods, 24-7, 365. We don’t get to just not worry about it, because it’s not business hours.”

“So that is why we are annoying him on a Saturday,” she said.

The group grew to about 50 and they made a racket of chants, whistles and smashing cookware at the foot of Yost’s driveway while a security agent from the AG’s office looked on. The cacophony was short lived though — after about twenty minutes they learned Yost wasn’t home.

Some Ohioans employed similar tactics to voice opposition to COVID-19 restrictions and to intimidate then-health director Amy Acton early in the pandemic. But Katie McKeel and her husband John were quick to draw a distinction.

“If my right to my choice and my self-autonomy and what I do with my own body is not as important as the airspace of our elected officials, I find that to be completely out of whack,” McKeel said.

Christy Williams came to the protest with her daughter, and she argued that banning abortions won’t reduce the number that occur, it will just make them more dangerous. Like the McKeels, she believed their right to protest should take precedence. 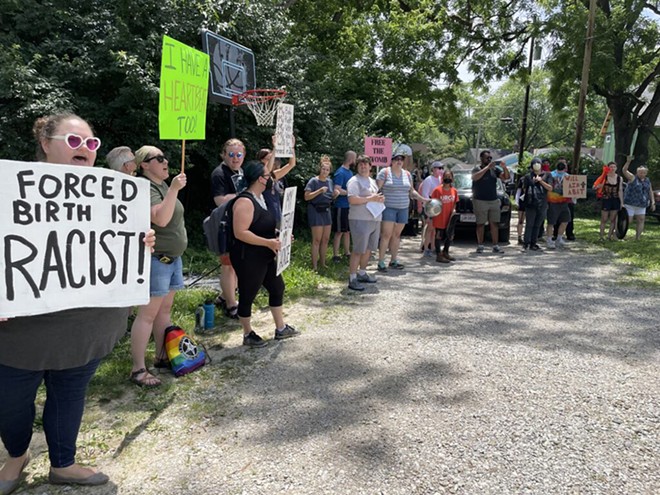 On June 26, thousands of people turned up at the Statehouse for a rally put on by the Ohio Democratic Party. Notably, although not surprisingly, many of the groups spanned generations. Mothers with daughters and even granddaughters showed up together waving handmade signs. Picking up on that, U.S. Sen. Sherrod Brown noted up he was there with his wife, his daughters and grandkids. Brown told the crowd “we need a plan,” and argued for electing two new Democratic U.S. Senators and maintaining the Democratic majority in the House.

“If we can carry out this plan, by this time next year the Senate and the House of Representatives will have codified Roe v. Wade,” Brown argued.

The problem is, picking up Senate seats while keeping the House is a pretty tall order for a midterm election amid persistent inflation. The court’s decision to overturn Roe surely changes the political calculus, but it’s unclear how much.

The other issue, as people like Nina Turner have pointed out, is that Democrats already have control of all the levers of power they need to codify abortion protections — they simply haven’t acted because some Democratic senators oppose ending the filibuster.

Speaking afterward, Brown acknowledged some members of his caucus are “not in the right place” when it comes to the filibuster, but he insisted with two new members the party would act.

“If we have two more Democrats, we will change the filibuster rules, so that a majority can speak,” Brown said. “All we’re asking for is majority rule.”

One candidate looking to flip a Senate seat in Brown’s plan spoke to the crowd as well. Ohio Democratic U.S. Senate nominee Tim Ryan described the whiplash of marching to the Supreme Court building on Friday to protest with his 18-year-old daughter, in D.C. for an internship, alongside fellow congresswomen who were part of the fight that led to Roe in the first place.

Ryan acknowledged afterward that some voters might feel pessimistic in light of Democrats’ unwillingness to roll back the filibuster and take action to protect abortion access at the federal level. But he urged them not to check out.

While Ryan and Brown made the case for federal action, Democratic gubernatorial nominee Nan Whaley made a more immediate, explicit argument.

“Ohio is ground zero for this fight,” Whaley insisted. “We are one of the largest states in the country where abortion is on the ballot.

Whaley called Gov. Mike DeWine the “most anti-choice governor in the country” and chastised him for urging people to be civil in the wake of the decision. What’s civil about taking away rights, forcing women to maintain a pregnancy or risk dying on an operating table she asked.

Like Brown and Ryan she drew a bright line from the court decision to the ballot box.

“This is not a drill. This is not a hypothetical,” Whaley told the crowd. “Our lives and our children’s lives are on the line. I refuse to go back and I know I am not alone.” 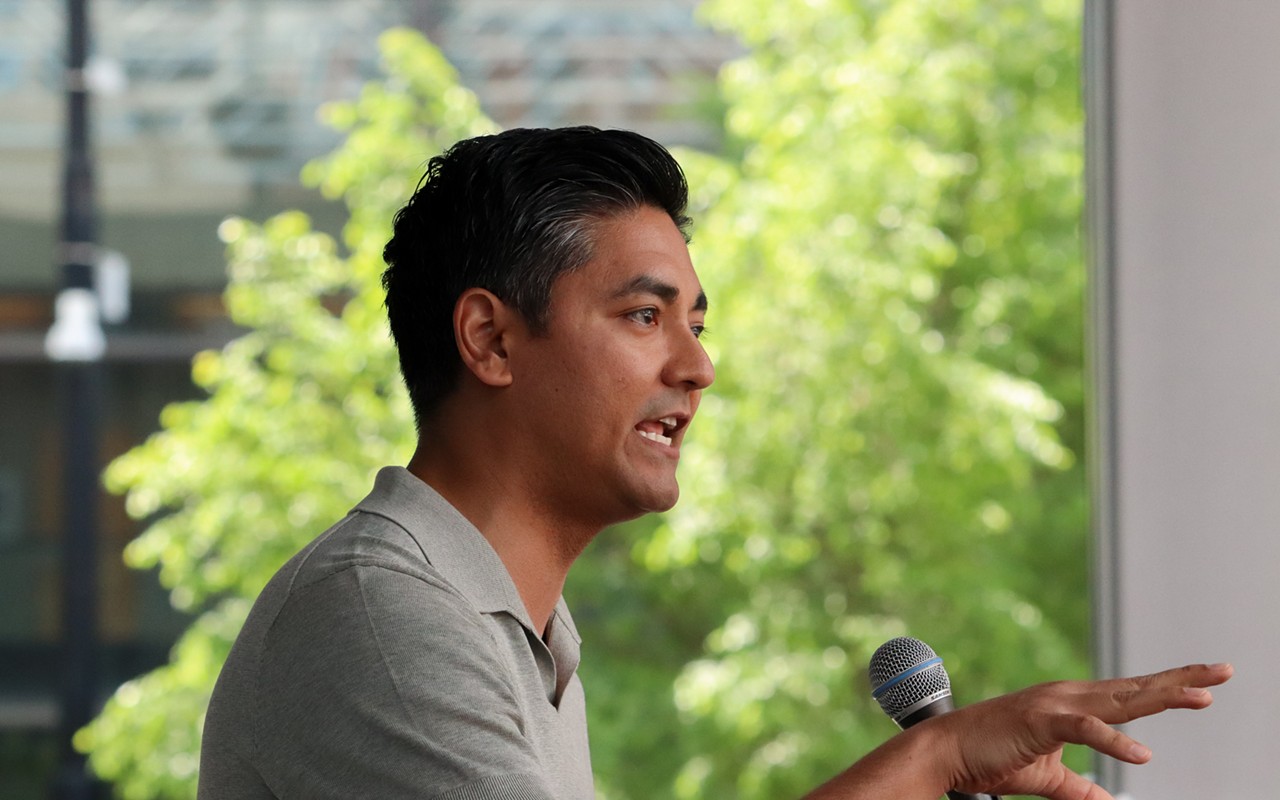 Ohio Leaders, Organizations React to Supreme Court Reversal of 'Roe v. Wade': Elected leaders, candidates and organizers in Cincinnati and Ohio are sounding off on the Roe v. Wade reversal. 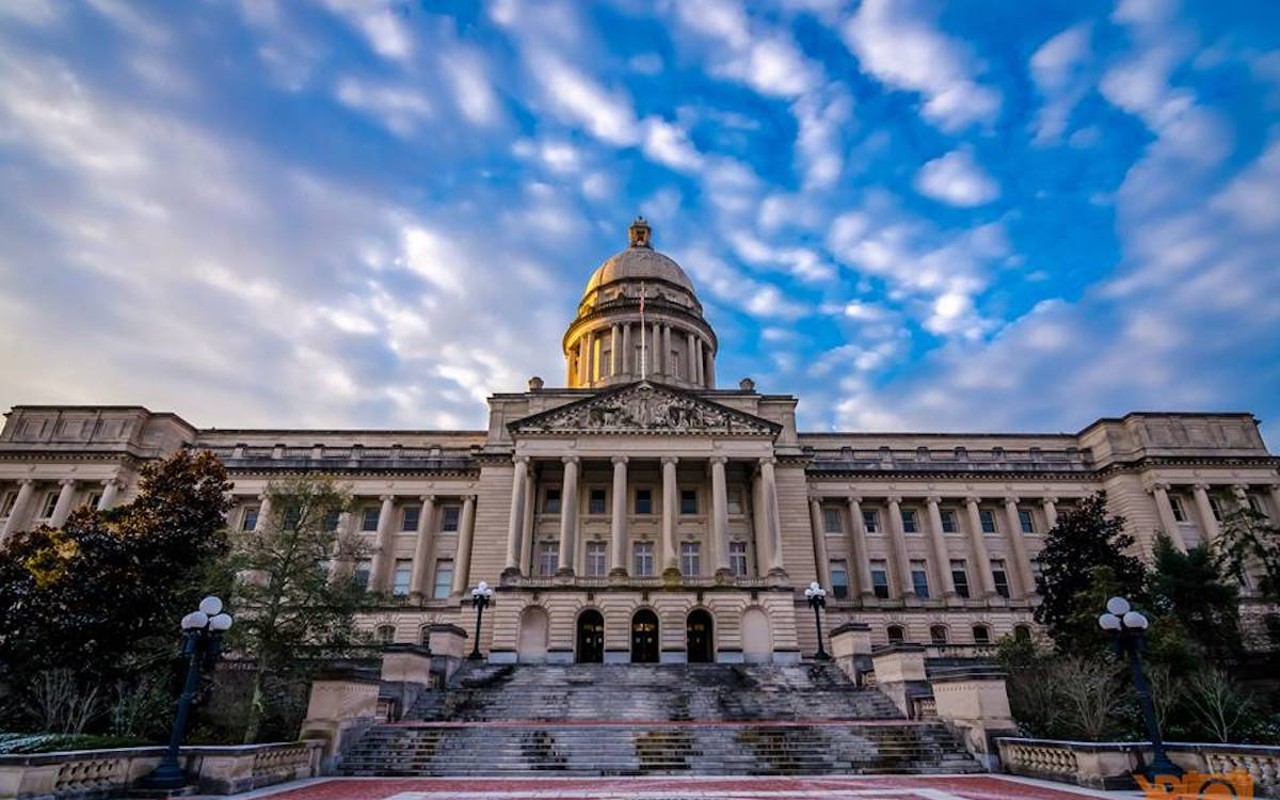 Trigger Law Effectively Bans Abortion in Kentucky After 'Roe v. Wade' Reversal: The law, which went into effect immediately after the reversal, bans abortions except in order to prevent the death or serious risk of death of a pregnant woman.