Last week, the ever-outspoken and questionably-Democrat Dusty Rhodes announced he would not seek reelection as Hamilton County Auditor in 2022. 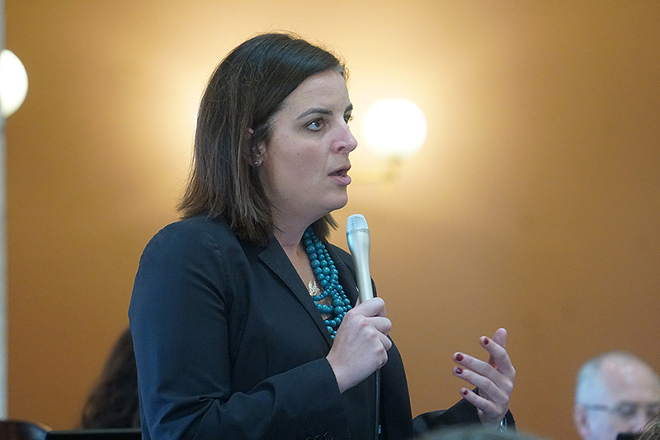 Last week, the ever-outspoken and questionably-Democrat Dusty Rhodes announced he would not seek reelection as Hamilton County Auditor when his term ends.

This week — after a teasing a "big announcement" — State Rep. Brigid Kelly (D-Cincinnati) declared her intent to run for the seat in 2022 for the term that begins in 2023.

In a July 27 tweet, Kelly wrote, "I've spent my career fighting for hardworking families. Now, I want to do it as your Hamilton County Auditor."

In her campaign video, Kelly says said will focus on "fighting for what matters most," highlighting her accomplishments over the past five years as a representative in the Ohio Statehouse. She mentioned cutting taxes on basic needs, advocating for expanding the homestead tax exemption to help seniors and her dedication as a public servant.

"The auditor is supposed to be our local consumer watchdog, and that is exactly what I'll be,"the Hyde Park resident said. "Whether at the grocery store or the gas pump, I'll make sure you're getting what you pay for."

She shared three platforms for her campaign:

According to her Statehouse bio, Kelly was born and raised in Norwood and represents Ohio's 31st House District, which includes neighborhoods Northside, Oakley, Walnut Hills, St. Bernard and more. Previously, she worked in public relations for United Food and Commercial Works Union (UFCW) Local 75, and currently serves in communications for UFCW Local 700.

Her stated goal is to improve the lives of Ohioans. "She’s championed issues such as commonsense, affordable healthcare; ensured families have an opportunity to succeed; and protected Ohio’s emergency responders and frontline workers," reads her bio.

"I am grateful to the citizens of Hamilton County for having the confidence and trust in me to elect me to a record eight four-year terms as County Auditor. I also thank our terrific staff who work with me and consistently meet the obligation of providing excellent service to citizens," Rhodes said in a statement.

"I will not be a candidate for re-election as County Auditor next year in 2022. I am making this announcement at this time to give potential candidates for this office plenty of time to organize their campaigns for next year," he added.

Rhodes also told the Enquirer that Kelly was "real honest" as speculation built regarding her possible campaign.

"I think she would do an excellent job," Rhodes said last week.

As Hamilton County auditor, Rhodes has been a polarizing figure and there has been dissent over whether or not he is, in fact, a Democrat.

Rhodes began his tenure in 1990 as a Democrat but in recent years has been agreeing more with right-wing conservative Republicans, especially through social media. His Twitter feed regularly has shared messaging supporting former President Donald Trump's false claim that he won the 2020 general election against President Joe Biden.

Rhodes, whose Twitter bio yells "STAND UP FOR YOUR COUNTRY!", is known for bigoted and misogynistic views. In 2020, Rhodes tweeted "Just wondering when they are going to paint 'Black Lives Matter' on Auburn Avenue, you know, in front of that building where they terminate black lives and white ones, too, almost every day of the week" on Juneteenth, the holiday that celebrates the emancipation of American slaves.

This May, the Hamilton County Democrats finally declared that Rhodes was "not in good standing."