The court ordered the pause as it considers similar gerrymandering cases out of Maryland and North Carolina. It should decide on those cases in June. 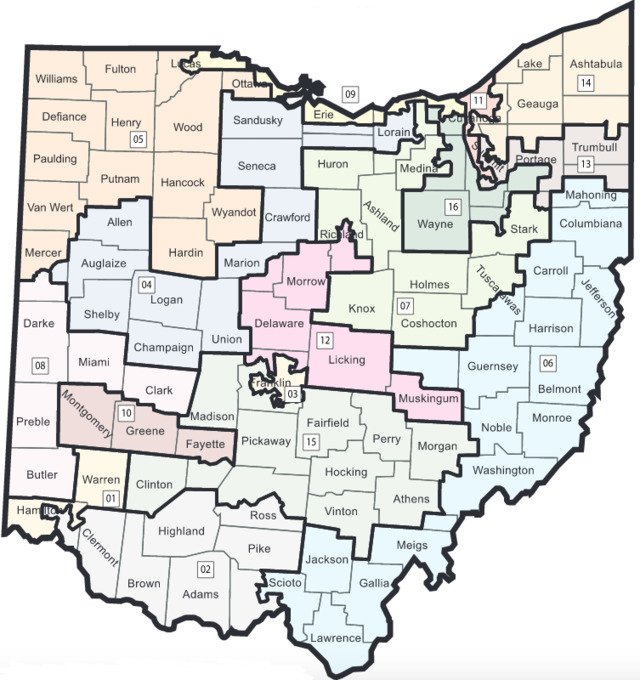 As it mulls cases challenging partisan congressional maps in other states, the U.S. Supreme Court today stopped the process of redrawing those maps in Ohio and Michigan.

Lower federal courts found Republicans drew those maps to be overly partisan, and, in Ohio, ordered that new maps be drawn up by June 14 ahead of this year's general elections in November. Lawmakers in Michigan faced an Aug. 1 deadline for their new map.

But the Supreme Court says that its decision on other gerrymandering cases could impact redistricting efforts across the country. Those cases come from Maryland, where Democrats have been accused of drawing maps for partisan advantage, and from North Carolina, where Republicans have been accused of the same. The Supreme Court is expected to have a decision in those cases by the end of June.

A panel of three federal judges May 3 unanimously ruled that Ohio's congressional map is unconstitutional. Ohio Attorney General Dave Yost appealed that ruling and asked the Supreme Court to issue a stay on the order to redraw the state's map.

The lower court's ruling found that mapmakers manipulated congressional districts to benefit the Republican Party, a violation of voters' constitutional right to choose their elected representatives. Ohio won't be permitted to hold another election using the map, and the judges ordered state lawmakers to submit a new one by June 14.

Ohio Republican elected officials vowed to appeal the decision, however.

Ohio's current congressional map was drawn by a Republican-controlled panel in a Columbus hotel room in December 2011. From 2012 to 2016, Republicans in Ohio won 56 percent of the state's votes for U.S. House candidates. But they netted 75 percent of Ohio's seats in the House. In 2018, that pattern repeated, with Democrats getting only four of the state's 16 seats.

That's because many of the state's congressional districts are drawn so that races in them aren't competitive, groups challenging it say. Instead, large numbers of reliably conservative voters are concentrated in districts like Ohio's 1st Congressional District, which encompasses the west side of Hamilton County and deep-red Warren County. U.S. Rep. Steve Chabot has held that district since the 1990s, save a brief exception in 2009 when Democrat Steve Driehaus defeated him for a single term just before the districts were redivided.

The federal judges last month tore into that district and others like it, stating that "the plausible explanation for District 1's configuration was the predominant desire to crack Democratic votes in Cincinnati, a cohesive center that would likely have elected a Democratic representative."

“In this case, the bottom line is that the dominant party in state government manipulated district lines in an attempt to control electoral outcomes and thus direct the political ideology of the state’s congressional delegation,” the lower court judges' ruling reads.

According to the ruling, many of the districts are drawn — sometimes with wildly convoluted shapes — so as to divide up major population centers like Cincinnati, which have more liberal and minority voters. Heavily-urban Cuyahoga County, for example, is split four ways, each small section mixed with much more conservative suburban and rural areas.

That division devalues the votes of urban communities, including predominantly minority ones, critics say.

“For too long our communities have suffered and been marginalized through an abuse of power with gerrymandering," Ohio Legislative Black Caucus President State Rep. Stephanie Howse said in a statement after the federal court struck down the map. "Ohioans have been clamoring for change to our electoral maps since they voted to pass Issue 1 in May 2018 and today their voices have been heard.”

But Republican state officials say that the current map was drawn by Democrats and Republicans, who both gave up a district when the state lost two congressional seats due to a dwindling population. They also point out that the state will get a new congressional district map after the 2020 Census anyway after voters ratified Issue 1.

"The process of redistricting is inherently political and it needs a political solution," Ohio Attorney General Dave Yost said in February. "We have a new process in Ohio. And it's a much better process than what's gone on since the 1960s."

Currently, the party controlling Ohio's General Assembly and governor's office has almost complete control over how congressional districts are drawn every 10 years. The current map was drawn up in 2011 mostly in a hotel room in Columbus rented for $9,600 in taxpayer money by staffers for Republican state legislators. Two of those two staffers, Ray DiRossi and Heather Mann, were each paid $105,000 as contractors for their work drawing the maps.

The group working on the redistricting project called the hotel room "the bunker." Correspondence between those working on the map and others within the GOP shows that, among other changes, mapmakers redrew boundaries to include now-Ohio GOP Chair Jane Timken's headquarters in Canton in U.S. Rep. Jim Renacci's district. At the time, Timken was the vice chair of the Stark County GOP and a major Renacci donor.

The request for that change and others came from the office of then U.S. House Speaker John Boehner, who, according to the correspondence, had final say over the map.

In May last year, Ohio voters approved Issue 1, which seeks to reform the redistricting process. Under the reforms, legislatures will still draw the maps, but at least half of Democrats and half of Republicans in the legislature will have to approve the maps. If they can't agree, a seven-member, bipartisan lawmaker commission will take over the redistricting, with at least two votes from members of each party needed to approve a map. If that also fails, the legislature can then draw a map without any restrictions — but it will be good for only four years, not 10.

The groups bringing the suit filed last year say that Ohioans shouldn't have to wait for the coming Census to have districts that represent them.

Now, however, it looks like they will at least have to wait until the Supreme Court decides on cases elsewhere.