With developments stirring, a walk around the West Fourth Street Historic District will soon parallel its former glory.

With developments stirring, a walk around the West Fourth Street Historic District will soon parallel its former glory. The corridor was established in the early 19th century with hotels, mansions and luxurious entertainment sites housed in Italianate and Renaissance-style architecture. It landed a rank on the National Register of Historic Places in 1976.

Since its prestigious inception, the area has shifted in and out of hot spot status. High-end shopping destinations such as McAlpin’s and Tower Place Mall came and went, parking garages and hotels have been erected and dismantled. Beloved businesses like Koch Sporting Goods, Bromwell’s and Main Auction Galleries still thrive, but a focus on creating more residential space never trended down, distorting the neighborhood’s sense of place and direction.

Recent developments led by The Loring Group aim to reverse the distortion and promise to open at least 10 new small businesses by year’s end. The local real estate company seized 15 properties in and around Fourth Street with over 30,000 square feet of vacant retail space.

This purchase solidified 17 to 20 new and pre-existing storefronts in the district. The project, called Historic West Fourth, was officially launched in October 2019. Since then, a quiet reawakening has ensued from Plum Street, wrapping west around Central Avenue.

“Historic West Fourth pays homage to the past,” says Andrew Naab, director of commercial development at the Loring Group. “Fourth Street used to be this grandiose corridor that had retail and shopping. It had some of the old homes and mansions — the first apartment for William Howard Taft — it had this burgeoning history and now, as we are in 2019-2020, we’ve realized it’s making a comeback again.”

Citing over $500 million by various investors in the district, The Loring Group isn’t the largest investor but they are dominating the comeback by owning the most property there. Renovations to the residential space above the once-vacant commercial spots was the first step, followed by filling the voids below.

The key was finding businesses that would make great tenants and contribute to the vitality and growth of the neighborhood, Naab says. The journey was about creating a brand to “give away” to the community, spinning a web of commerce with the input of existing and to-be businesses and residents.

“It couldn’t just be a Loring Group initiative,” Naab says. “It had to truly be a community-owned initiative that was sponsored by The Loring Group. It won’t be successful without that community buy-in and support.” Ninety percent of properties have been leased and over 60% of those are to women and other minority-owned businesses, Naab says. Perfectly Poshed opened in August and is the only Black-owned beauty supply that carries strictly ethnic products, according to its website.

Dan and Katie Arendt live on The Banks and enjoy exploring local breweries. The tactical, simultaneous grand openings of Nina’s and Rebel Mettle lured the couple to check out the area. They have since found themselves frequenting the establishments.

“We’ve really enjoyed the Rebel Mettle area because it’s a much more relaxed vibe than we get living on The Banks,” Katie says. “And it’s nice to go there and have a laid-back atmosphere with good beer.”

The two businesses are disrupting the model of others like them, boasting distinct qualities. Veteran-owned Rebel Mettle is lager-centric, an atypical focus in the industry today. And Nina’s is the only yoga studio in the city to use infrared heat for hot yoga sessions. Despite these exclusive offers, the area remains approachable while complementing surrounding neighborhoods like Over-the-Rhine. 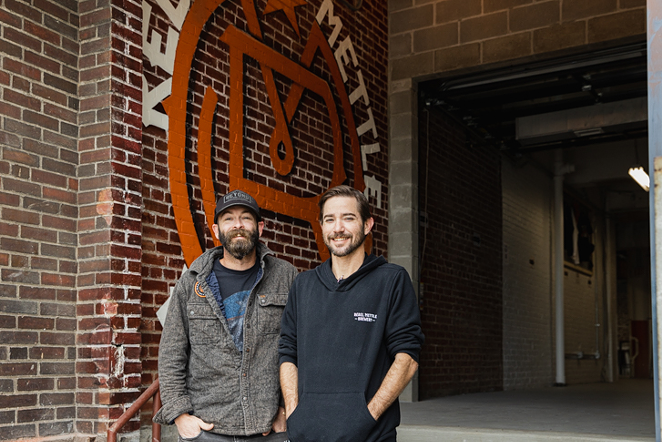 “Our goal was to find the strongest and best operators here in the city,” Naab says. “Not so we would compete with places like OTR, but (so) that we would complement OTR so people feel like they can go to and from OTR to Fourth Street and vice versa and explore a different part of downtown that until recently was pretty quiet.”

Rebel Mettle owner Mike Brown was considering a location in OTR but ultimately chose the Fourth Street District. In an email he said that the neighborhood transformation will not only generate jobs but also create a “vibrant destination” or an “All-in-one shop so to speak. You can spend all day here, shopping, eating and having a drink or two.”

“There needs to be some type of entity that connects all of these business owners,” he says. “Then that will make for a much more sustainable district.”

Nina DeMers, Nina’s Yoga & Wellness Studio owner, said that collaboration is a community-defining term. She wants to devise opportunities such as holding yoga sessions at Rebel Mettle Brewery and creating an internet cafe in her lobby so people can bring their Better Blend smoothies or Deeper Roots coffee and enjoy the space.

DeMers had been thinking about coming to downtown for a while and finally chose the area because it wasn’t saturated with options, she says. Her original Fairfield location will remain open.

“If the residents are always turning over and there’s not a community being built then you’re not going to see growth,” DeMers says. “We are building a community and that is what builds success.”

Once everything is up and running, the future holds block parties or happenings similar to Final Fridays and those that involve family-friendly activities, Naab says.

For now, Historic West Fourth has one final lease to secure — formerly Tina’s Bar — then it will be able to call itself complete, although it is just the beginning of a lasting evolution for the neighborhood.

For more information about development in the Historic West Fourth district, visit historicwestfourth.com.