The 69th Primetime Emmy Award nominations were announced last week, with the list reflecting many merited accolades, a little bit of overkill, some straight-up snubs and lots of surprises. 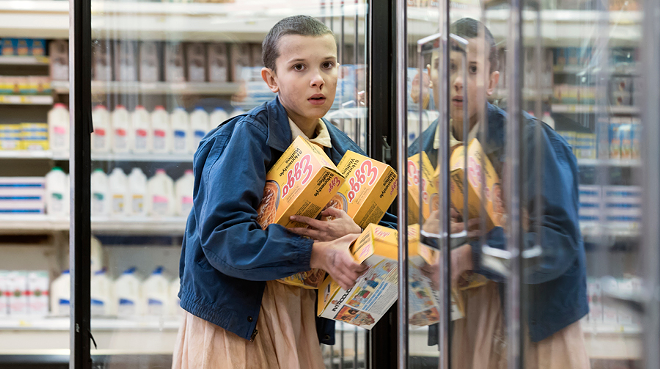 Photo: Curtis Baker / Netflix
Millie Bobby Brown of "Stranger Things"
The 69th Primetime Emmy Award nominations were announced last week, signaling the who’s who of the television world. Leading the pack are Saturday Night Live and Westworld (22 nominations each); Feud: Bette and Joan and Stranger Things (18 each); Veep (17); and Big Little Lies and Fargo (16 each). It’s the most diverse collection of Emmy honorees ever (a trend for the show three years running) with 25 actors of color recognized and minority-led programs like Master of None, 13th, Atlanta and black-ish getting love, too. Women writers and directors are seeing a bit more representation, while actresses over the age of 40 dominate across the board. But not completely: Millie Bobby Brown is up for her role in Stranger Things at age 13.

The Television Academy introduced two new categories this year: Outstanding Music Supervision, which highlights those who create some of the great soundtracks on TV, and Outstanding Casting in a Reality Program. Meanwhile, Outstanding Cinematography for a Single-Camera Series has been split in two to differentiate between one-hour and half-hour series. This distinction acknowledges the increasing number of visually rich, stylistic 30-minute shows, like Transparent and Mozart in the Jungle.

So which programs and players deserve the nods and  — more importantly — wins? With the current crop of talent, even the most opinionated viewers might have trouble narrowing down that very long nominee list. But the list reflects many merited accolades, a little bit of overkill, some straight-up snubs and lots of surprises.

Big Little Lies has been one of my favorite shows of the year, so it’s no surprise that the HBO drama dominates the limited series categories. Everyone talked about Nicole Kidman’s performance as an abused wife and mother — which was fantastic, for sure — but I was blown away by her co-star Reese Witherspoon. The squeaky-clean Legally Blonde alum killed it as a bitchy meddling housewife. The two face off against the leading ladies of American Crime, Fargo and Feud: Bette and Joan, while co-stars Laura Dern and Shailene Woodley are represented in the supporting actress division.

It’s been more than a year since HBO miniseries The Night Of first premiered, but I haven’t forgotten about it. After a lackluster showing at the Golden Globes, I’m hoping this heart-wrenching crime drama garners a few awards from its 13 nominations. Riz Ahmed’s transformation from skinny, innocent college student to buff, bona fide prison hustler still haunts me.

The guest actress category for drama is packed with fantastic performers, including Ann Dowd (The Leftovers) and Alexis Bledel (The Handmaid’s Tale), but I’m particularly delighted to see Alison Wright up against Shannon Purser. Wright’s Martha in The Americans and Purser’s Barb in Stranger Things are two oddball characters that met different forlorn fates, leaving fans lamenting “Poor Martha” and calling out for #JusticeforBarb. Perhaps one will finally be vindicated!

Elsewhere, personal favorites Master of None, Fargo, Stranger Things, The Handmaid’s Tale, Better Call Saul, Westworld and Atlanta are all deserving of their six-plus nods.

Saturday Night Live is tied for the most nominations with 22 after ranking fifth with 16 nods last year. Now, I am a die-hard SNL fan — a defender, even in its slumps. It’s a cultural institution! This season did have its high points: Melanianade, mechanic Drag Race fans, David S. Pumpkins, to name a few. And Kate McKinnon should always be nominated for everything she ever does (she and co-stars Leslie Jones and Vanessa Bayer are up for Best Supporting Actress in a Comedy). But SNL’s 42nd season was far from its best, let alone the best show of the year, and shouldn’t be most decorated. Alec Baldwin’s Donald Trump impression — which garnered him a nod, too — was a welcome surprise… at first. Eventually the gag felt less like a defiant act and more like poking the bear (a bear who happens to have nukes) without offering any solid humor or commentary. Pretty sure the Academy is just straight-up trolling the SNL-bashing Trump with this one.

While I enjoyed Feud, the Academy’s love for Ryan Murphy has become obvious and, while worthy of nominations, I’d be disappointed if it swept the limited series circuit. And while both Susan Sarandon and Jessica Lange are recognized for their roles, it’s unlikely we’ll get to see any competitive rivalry akin to their characters.

Veep and Modern Family continue to serve as Emmy shoe-ins. While still hilarious several seasons in, both shows have garnered tons of praise, and I’d like to see some fresh meat get some love.

Finally, while I adored the debut season of This Is Us, the talented cast clogs up many of the drama categories, including guest actor.

During a golden age of TV, with so many shows deserving of accolades, some people question if the idea of snubs might be obsolete. But there were a few solid shows and performances that were noticeably absent from the long list of honorees.

Game of Thrones, which usually rakes in the nominations, received none this time — but it’s no snub. Season 7 just premiered this week, making it ineligible for this year’s Emmys (the previous season earned 23 nods and 12 wins in 2016). Those drama nominees are surely thankful not to have to compete with HBO’s giant this time around — although it’s clearly been replaced by Westworld. Now that’s a showdown to look forward to in 2018.

I expected Issa Rae’s excellent HBO series Insecure to replace Girls in the comedy field, but the show was dismissed entirely. Lena Dunham’s passion project was also absent from the major categories after its final season.

The Leftovers technically did get one nomination, for Ann Dowd as guest actress in a drama, but that masterpiece deserved much more. Carrie Coon should have been recognized for her performance in Leftovers over Fargo, but it would be great to see her win anyway (it’s doubtful). It’s also perplexing why the show wouldn’t be represented among the best dramas, or how Justin Theroux’s performance was once again entirely overlooked.

Additionally, I would have loved to see Michael McKean nab a supporting actor nod for his role as the complex older brother to Jimmy in Better Call Saul (which otherwise has a decent showing with nine nominations).

Should Black Mirror episodes be considered TV movies? Yes, according to the Academy, which nominated the sweetest episode of the sci-fi mind-fuck, “San Junipero,” for Outstanding Television Movie and for its writing, while social media-centric episode “Nosedive” is up for cinematography. I’d argue Black Mirror is a series, even if each one-hour episode has a different story and cast, but it is so excellent that I’m just happy it’s finally getting some attention.