I Shall Not Be Moved and Your Negro Tour Guide will run from April 9 through May 7. 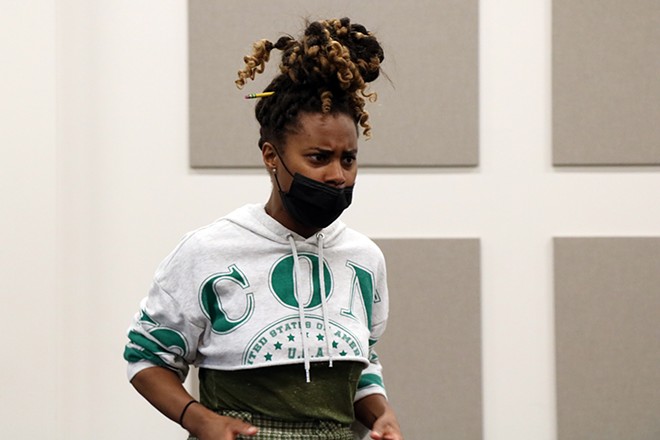 Photo: Provided by Ensemble Theatre Cincinnati
Samantha Russell stars as Betty Daniels Rosemond during a rehearsal for I Shall Not Be Moved.

Ensemble Theatre Cincinnati (ETC) continues its longtime commitment to socially conscious and thought-provoking contemporary theater with a pair of one-act, solo-performance plays about Black women: the newly commissioned world premiere of Isaiah Reaves’ I Shall Not Be Moved and the updated revival of Your Negro Tour Guide, based on Kathy Y. Wilson’s former CityBeat column and commentaries for National Public Radio, collected in Your Negro Tour Guide: Truths in Black & White, published in 2004.

Reaves, a playwright recently graduated from Northern Kentucky University and now enrolled in the University of Iowa’s Playwrights Workshop, has written a script about his grandmother, Betty Daniels Rosemond, a trailblazing Freedom Rider who fought for civil rights in the American South in the 1960s. Your Negro Tour Guide was created by actor Torie Wiggins and director Jeff Griffin in 2008, presented at the Cincinnati Fringe Festival that year, subsequently in New York and Texas, and then at ETC in 2012. A decade later it has been updated by Wilson and assembled into a fully staged production that will again feature Wiggins, who is also staging Reaves’ piece.

“I am both personally and professionally grateful to have an opportunity at Ensemble to bring these two playwrights together and their vision of what was and what can be for our country and our world,” ETC’s Producing Artistic Director D. Lynn Meyers says in a statement about the plays. “I have the utmost respect for what Kathy Y. Wilson has done in her career to enhance our vision, to strengthen the connections between people, and to call it the way it is. She’s uncompromising, and that’s what I always want Ensemble to be.

“Isaiah Reaves is an inspiration. It’s amazing how he wrote his grandmother’s story using her words and his influence as a young Black man in this world. Having these shows to look forward to during the dark days of the pandemic always kept light shining at ETC.”

Reaves drew inspiration from his grandmother’s diaries to tell the story of a young Black woman’s fearless battle for equity and equality.

“She was the center of my life,” Reaves tells CityBeat. “I grew up admiring her, and her Freedom Rider’s story was something I didn’t at first understand. When I started writing plays when I was younger, my dream was to tell her story.”

But he felt he wasn’t ready to write it.

“I wanted to wait until I was confident enough in my craft,” he says. “I wanted to wait for the right opportunity to present itself. This is really 13 years in the making. It’s taken me that long to do this.”

ETC encouraged him by commissioning the work and giving I Shall Not Be Moved a workshop reading to refine the script two years ago.

Betty Daniels Rosemond’s activism was motivated when her mother was denied the right to vote in Louisiana. Rosemond witnessed the beginning of the Civil Rights movement as it was portrayed in the media. Living in New Orleans, she paid attention and felt she had something to accomplish.

“She was not happy with Jim Crow laws,” Reaves says. “There were people who were very comfortable not disturbing the peace, but my grandmother was not one of those people.”

Rosemond was one of the first Black students to enroll at Louisiana State University. She studied writing and English, but her activism cut short her formal education. She eventually came to live in Cincinnati and had a family. Her grandson is the first person in his immediate family to earn a college degree, something Rosemond encouraged and supported.

Reaves had not previously written a one-person show.

“I have not enjoyed solo theater, but the story kept coming to me as a solo piece. It was the best creative challenge in the world for me to investigate,” he says.

His script portrays Rosemond on a single night as she’s “packing to go on a Freedom Ride while she decides whether or not to continue,” he says.

The work is a monologue about her experiences. The central conflict of the story is whether or not to continue her work as a Freedom Rider, knowing she could be risking her life.

“The audience helps her make that decision,” Reaves says. 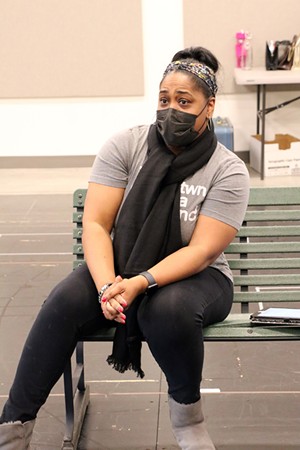 Wiggins, who is staging Reaves’ one-act play, is doing double-duty: She’s also the solo actor performing Your Negro Tour Guide. She has a history with the material, dating back to the early 2000s. She and director Griffin were drama students at the University of Cincinnati’s College-Conservatory of Music when Wilson’s sassy, passionate columns — rants about race, gender and class issues in America — were published in CityBeat. They partnered with Wilson to develop a script for Wiggins to perform, and they have worked with Wilson to update the material for the ETC presentation.

Wilson, now in her late fifties, says references to Black culture, music and rappers had to be brought into the present. She’s added a section about “gay runaway slaves,” one unruly and outspoken — like Wilson herself — and another who’s the slave owner’s untouchable offspring.

“There’s a soliloquy that uses every euphemism to refer to lesbian sex,” Wilson tells CityBeat. She admits that she’s invented some of the terms while some of it is real language.

Wilson marvels at Wiggins’ acting skills, saying she has to voice what both the Black overseer is saying as well as the two women.

“And it has to end on some weird punchline,” Wilson says.

Wilson says working with Wiggins and Griffin has been an education for her in theater and she’s been reading plays and taking notes.

“I take notes like I’m a graduate student. You have to study whatever you want to be excellent at,” she says.

ETC warns that Wilson’s piece contains mature language and content, including themes of racism and racial slurs, physical assault, sexual identity, homophobia and misogyny, and adds that it’s “not suitable for young audiences.”

But ETC’s double-bill promises an evening of provocative, moving performances that will certainly be stimulating for the rest of us.

I Shall Not Be Moved and Your Negro Tour Guide will be presented as a double bill at Ensemble Theatre Cincinnati (1127 Vine St., Over-the-Rhine) from April 9 through May 7. Tickets and more info: ensemblecincinnati.org.