The aquarium is taking name submissions for the sharks until the end of the year. 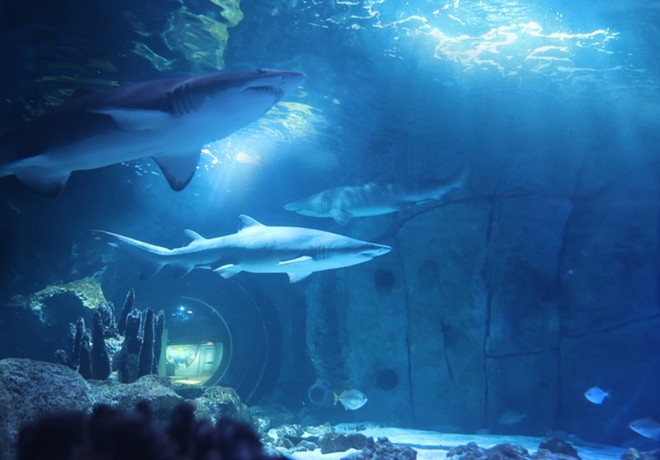 The Newport Aquarium has welcomed three new sand tiger sharks to its Surrounded by Sharks exhibit. The sharks will join several other species in the exhibit, including shark rays Sweet Pea, Sunshine and Scooter and the black tip reef sharks.

The aquarium says the sharks are two males and a female and will play important roles as animal ambassadors for the species. They are currently taking suggestions from the public on what to name them. You can submit your name ideas here until the end of the year.

With their 7-foot-long frames and wide, toothy grins, the aquarium says the tiger sand shark can appear intimidating at first, but they’re actually pretty docile. They’re mostly found in shallow bays and inshore tropical waters, and have even been seen circling shipwrecks off the eastern coast of the United States.

And like many other shark species, the sand tiger shark is being threatened by problems like rising sea levels and shark finning, and they’re even considered critically endangered in some parts of the world.

To help combat this, the Newport Aquarium is partnering with the Association of Zoos and Aquariums to study these new sand tiger sharks and think of ways to aid in their conservation and educate the public about the species.

“We are thrilled and humbled to care for these sharks and help scientists around the world make sure these beautiful creatures survive and thrive on earth,” Newport Aquarium general curator Kelly Sowers says in a press release.

To give annual passholders more time to visit these new sharks, the aquarium has a limited-time offer to extend their passes an additional two months.

Learn more about the Newport Aquarium.