The local economy received boosts from the match itself as well as from money that flowed into hotels, bars, restaurants and shops. 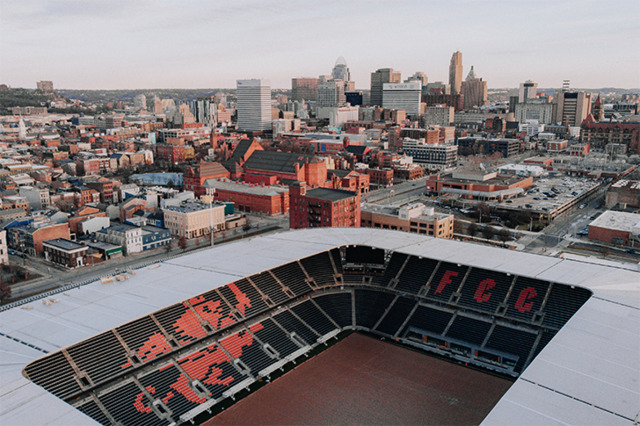 Cincinnati loves soccer — and so do the thousands of people who come here from elsewhere to see it.

The Queen City scored big earlier this month when it hosted the World Cup qualifying match between the U.S. Men’s National Team and Mexico. Not only did it bring hot national players and international stars to town, but the event also gave a significant boost to Cincinnati's tourism.

A release from the Cincinnati USA Convention & Visitors Bureau says that the sold-out match, which was held Nov. 12 at TQL Stadium in Cincinnati's West End, was responsible for the region's biggest tourism weekend since the COVID-19 pandemic began in March 2020. The local economy received boosts from the match itself as well as from money that flowed into hotels, bars, restaurants and shops all weekend long.

“Cincinnati shined bright as our community came together to host the USA vs. Mexico World Cup Qualifier Match at the TQL Stadium,” Cincinnati Mayor John Cranley says in the release. “From hoteliers and restauranteurs to all the stores, bars, and shops in between, we showcased the charm and energy that is the hallmark of our city. I am proud of our hospitality industry, our public servants, and our residents, who showcased why this is such a great community. I look forward to continuing to put Cincinnati on the map as the ideal environment to host world-class international events.”

“The hotel occupancy and revenue figures from the USA vs. Mexico match were the highest we’ve seen since the start of the pandemic,” Julie Calvert, president and CEO of the Cincinnati USA Convention & Visitors Bureau, says in the release. “Hotel occupancy was on par with our two largest annual tourism weekends, the Cincinnati Music Festival and the Flying Pig Marathon.”

Upon the match selling out earlier this month, U.S. Soccer said that fans from every state in the country as well as Washington, D.C. had purchased tickets. USA won the match, and TQL Stadium was at capacity with 26,000 attendees.

The USMNT vs. Mexico match was announced at the end of July. At that time, Carl Lindner III, the majority owner of FC Cincinnati, said the USA/Mexico match would be "one of the most significant soccer matches in the world."