"We're going to expect to win every game," Satterfield said.

Photo: youtube/cincinnatibearcats
Scott Satterfield addresses the media for the first time as the new head football coach at the University of Cincinnati on Dec. 5, 2022.

The deal for the University of Cincinnati's new head football coach came together quickly, and Scott Satterfield was just trying to enjoy the whirlwind.

"Man, what an honor it is for me to be here. It truly is. I mean, I'm honored to be a football coach, to be able to help mentor young men, and there's not a better place to do it than right here at the University of Cincinnati," the Bearcats' new head coach told media on Dec. 5.

Just hours after UC announced that Satterfield would take over for Luke Fickell, who departed for the University of Wisconsin about a week prior, the coach shared his vision for his new team.

"I come to Cincinnati with a program that is used to winning, that wins championships. I want to be a part of that," Satterfield said. "Twelve bowls in 16 years. That's tremendous. We want to continue that."

Satterfield, now UC's 43rd head coach, had been leading the University of Louisville Cardinals since the 2019 season, posting 25-24 record with three bowl games over four seasons. Before that, Satterfield compiled a 51-24 record over six seasons at Appalachian State University, his alma mater where he'd also earned first-team all-conference honors as a quarterback.

Louisville ended 2022 with a 7-5 record in the Atlantic Coast Conference.

Previous reports claimed that Satterfield's deal with Cincy came together quickly, and the new coach confirmed that during the briefing. Satterfield said that UC's leadership, athletics department and a looming conference move influenced his decision to leave Louisville.

"Once I had an opportunity to meet with the leadership here, I knew, 'Man, this is the place I want to be.' And then it was up to them to see if they wanted me," Satterfield said. "When that happened, it was go time."

"This time of year is always crazy for football coaches. I mean, it's never good. You guys just went through it with Coach Fickell. It's not good for the team that you're leaving, it's a lot of apprehension on the team [where] you're going, and at this time of year, bowls are happening, we're trying to recruit – it's so many things [that] are going on. That part, I don't like," Satterfield continued. "It'd be awesome if we said, 'Alright, everybody finish your season, everybody finish your bowls, and now we can start any kind of coaching carousel.'"


He added that the city of Cincinnati's reputation for being a sports haven contributed to his decision.

"I know this city is an outstanding city for football and for sports. It's going to be awesome to be a part of that," Satterfield said. "I was driving in, I was watching the Bengals play [on Dec. 4], and it was awesome. That was a great game yesterday, you know? To be able to live right here and be able to go there, I've never had that opportunity, and I can't wait to experience the city and get out and about."

"I look forward to playing in this stadium right out here and filling that stadium up," Satterfield said, referring to Nippert Stadium. "I can't wait. I stepped on that field for the first time this afternoon, and it's awesome. It's awesome to fill that thing up and create that home-field advantage."

Satterfield's voice quivered when he acknowledged the Louisville players he was leaving behind.

"I especially want to thank my players at Louisville. That's where my heart's at, with those players," Satterefield said. "We spent four years there [and] gave it everything we had. All our heart and soul poured into those guys, and they changed the program. I'm forever grateful for those guys."

Satterfield joins Cincinnati after Fickell had built up UC's football program and became the winningest coach in the school's history. Fickell joined Cincinnati after the season's end in 2016, compiling a 57-18 record over six years. The team ended the 2021 season with an undefeated regular-season record and became the first non-Power Five conference team to go to the College Football Playoffs, where they lost 27-6 to the Alabama Crimson Tide.

Satterfield said he's not worried about competing with Fickell's legacy.

"I've done that before. Coach [Jerry] Moore was the winningest head coach at Appalachian State. It's a challenge, right? Everybody expects you to come in and pick up where they left off," Satterfield said. "But I'm not Luke Fickell. I'm going to be Scott Satterfield, and I'm going to do the things that I think we need to do to be successful.I have a ton of respect for Luke; what he did here was tremendous. Unbelievable job."

Pending university board approval, Satterfield has a six-year deal with UC that will pay him $3.4 million the first year; he'll also receive an annual $100,000 raise. That's less than Fickell's most recent contract before he left Cincinnati, which netted Fickell $5 million per year. Fickell now has a seven-year deal with Wisconsin that starts at $7.5 million per year with room for additional compensation for hitting performance and postseason milestones.

According to Justin Williams, writer for The Athletic, Cincinnati will pay a $3.5 million buyout for Satterfield to move from Louisville. That's the same amount that Fickell must pay Cincinnati for leaving.

During the briefing, Satterfield repeatedly said that he hasn't had a chance to size up the team's current commitments and roster because his first priority is putting together his coaching staff. But players still have been dropping by.

Photo: youtube/cincinnatibearcats
Scott Satterfield (left) gets his first jersey as the new head football coach at the University of Cincinnati from athletics director John Cunningham on Dec. 5, 2022.

Satterfield said he's in the process of talking with current UC coaches and also plans to lure some of his staff from Louisville north. This year, Cincinnati raised the assistant coach salary pool to $7.25 million – the university's highest investment in football, when combined with Satterfield's salary. Satterfield said that he'd asked for a large pool, "but quite frankly, I didn't have to ask for it. As I've said before, the administration here wants to be good at football, and they know you have to invest in it. For me, that's one of the big reasons I wanted to be here."

The Bearcats are 9-3 this season with a 6-2 conference record, good for third in the American Athletic Conference. The team is gearing up to move to the Big 12, a hefty change that Satterfield will lead. The new investment in the coaching staff will help with that, Satterfield said.

Satterfield said that expectations for UC's performance in the Big 12 are high.

"Well, probably everybody'll expect us to win every game, you know? We're going to expect to win every game. I think you have to go into it that way. We're attacking every single game to go win it," Satterfield said.

The coach said that in addition to sizing up the coaching staff, he's focused on recruiting new players and firming up commitments with current ones. Satterfield plans to use Greater Cincinnati as his farm system, he said.

"Cincinnati high school football is unbelievable, and so is the state of Ohio; it's one of the best states in the whole country [for football]," Satterfield said. "We've got to stake down this area right here, we've got to call on these high schools, we've got to hire people on this staff that will go out who already have those relationships. That's going to be a top priority for us."

Satterfield said that he'll be building up both offense and defense.

Scouting transfers and building relationships with those players will be vital, he said.

"When they created the transfer portal, I think as a college football coach, you have to embrace it, and if you don't, you're going to get passed up," Satterfield said of the system that was implemented in 2018. "It's the world we're living in, and we'll embrace the transfer portal. We'll be able to go out and try to find some guys that'll come in here and positively impact our team." 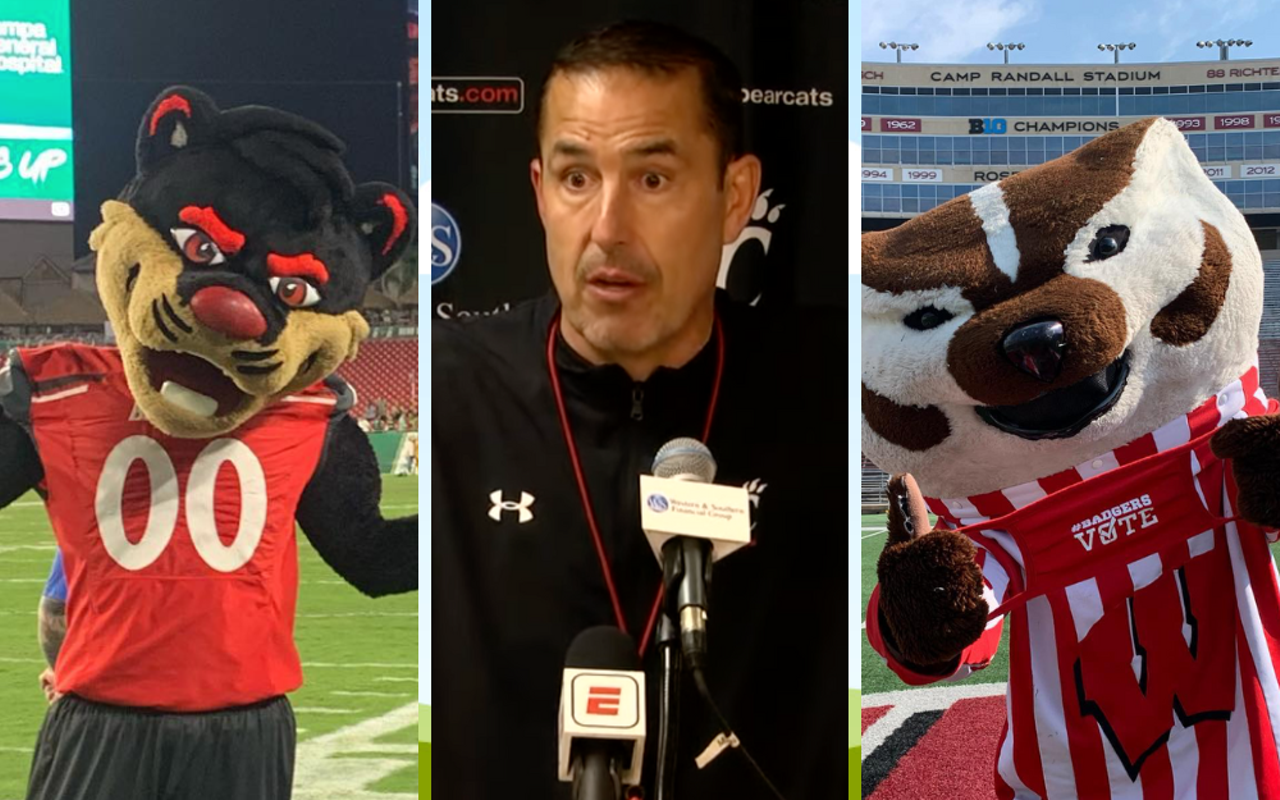 
Satterfield also discussed the new rules in which college football players can sell the rights to their name, image and likeness (NIL). Previously, the NCAA did not allow college athletes to earn money from publicity.

"I'm sure you've seen some of the numbers across the country. There'll be quarterbacks making more than their quarterback coach, you know, which is insane to me, but that's the world we're living in right now," Satterfield said. "Us, as coaches, we're team builders. Particularly in our sport, you have 115 guys in a locker room, there's 11 guys that are going to play. But we have to make them play for your team. We have to play for each other, play for your brothers beside you, so that's what our focus is."

"I think there's a time and place when players will talk about their [NIL] opportunities," Satterfield continued. "But once we get into the locker room, it's ball. We're playing for each other. From my experience, our players at Louisville that had NIL opportunities, they would even tell their teammates, 'Guys, it's ball time now, we're not worried about the business side of it.'"


A flyer on the Wasabi Fenway Bowl

Cincinnati and Louisville will square off in the Wasabi Fenway Bowl in Boston on Dec. 17, so Satterfield's sudden move to rival UC came as a surprise to many college football experts. During the Dec. 6 briefing, Satterfield repeatedly said that he would not be participating in any bowl programming, concentrating on recruiting players and building his staff instead.

"This is kind of a weird situation, right? I mean, Louisville's playing Cincinnati in a bowl game," Satterfield said. "I told both teams that I'm removing myself from [the bowl game]. I won't be there. I'm not going to be in that situation. My whole focus right now is putting together a staff and recruiting." He added that he wanted to "surround [players] with the best coaching staff in the country."


Satterfield said the Wasabi Fenway Bowl game will be led by Kerry Coombs, UC's cornerback and special teams coordinator who has served as interim coach since Fickell's departure.

"Coach Coombs has done a great job in the time since Coach Fickell left and the time we got here, and I can see how that staff has done an outstanding job. So Coach Combs will lead the team. He will lead everything for the next week and a half as they go to the Fenway Bowl," Satterfield said.

The Wasabi Fenway Bowl will be the first college football game ever played at Fenway, according to media materials.