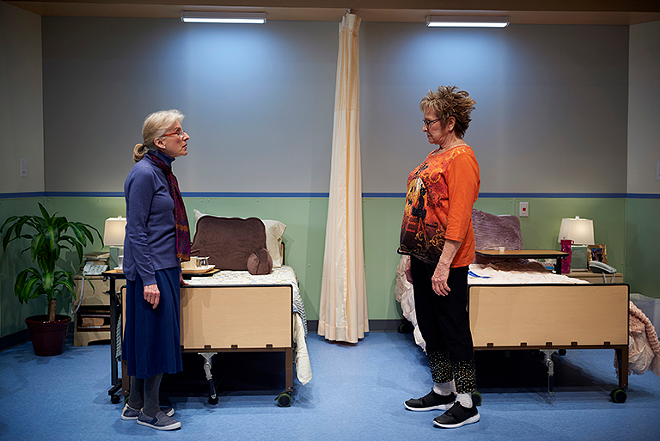 Ripcord stars two people who possess polar opposite personalities. One is uptight; the other is easygoing. Forced to make a home together in a small space, tensions boil beneath the surface and conflict unfolds and then escalates. Finally, the long-smoldering friction ignites and becomes a full-blown confrontation. Meanwhile, the audience hoots and wipes their eyes, unable to catch their breath.

What is frustrating and infuriating for the pair onstage translates as uproariously funny in the house.

Currently making its regional debut at the Ensemble Theatre, David Lindsay-Abaire’s side-splitter Ripcord resuscitates a familiar premise made legendary by Neil Simon’s comic masterpiece, The Odd Couple. In place of Oscar and Felix, the Pulitzer Prize-winning Lindsay-Abaire gives us Abby Binder (Dale Hodges) and Marilyn Dunne (Pamela Myers), a pair of widows who share a choice piece of real estate at the Bristol Senior Living Facility. Marilyn is a glass of champagne: bubbly and giggle inducing. Her roommate Abby, however, is a shot of pure acid that burns through friendships before they’ve even fully formed.

They want different things. Abby wants to be left alone; she has always had the room to herself and wants to keep it that way, thank you very much. Marilyn, on the other hand, wants the bed by the window. Hijinks ensue when the pair make a bet: If Abby can make Marilyn angry then she has to move out, which would restore Abby’s precious solitude. But if Marilyn can scare Abby, then Marilyn’s sleeping quarters will get a significant upgrade and a view of the park.

Abby’s caustic curmudgeonly attitude and Marilyn’s cheerful optimism are oil and water. Much of the fun — and horror — of the production extends from the heinous, heartless, hilarious pranks they play on one another. In one scene, Marilyn appears delighted to chat with complete strangers who call her in response to a fake Craigslist ad, posted by Abby. And when Marilyn tricks her into skydiving, Abby doesn’t blink. Instead, she rejects fear just as Marilyn rejects rage. Anger, Marilyn says, leads to a dark, scary place that she doesn’t want to visit anymore.

Cincinnati favorites Hodges and Myers make a delightfully entertaining team of rivals. Each leans way into her character, allowing the contrast between the two to fully emerge. Hodges deals in sharp edges and searing sarcasm; Myers is the human incarnation of a birthday cake. Jokes pop and land together as the two performers conjure up satisfying and precise comedy. An energetic supporting cast portrays a cadre of family members and health care providers — performed by Carter Bratton, Lisa DeRoberts, Justin McCombs and Ryan Wesley Gilreath. Each is lively, textured and deepen the story unfolding between the two women without being a distraction.

Lynn Meyers’ staging on Brian c. Mehring’s unfussy set gives the production a lean, efficient quality. As the plot moves from the antiseptic interior of a retirement home to the disturbing vignettes of a haunted house and even to the rumbling guts of an aircraft packed with skydivers, the audience moves with it, relishing in its gleeful flow.

Both women wield their demeanors like battle garb. Thick armor guards wounded hearts and expertly calibrated weapons battle merciless opponents: Reality, Old Age, Disappointment. And, of course, Fear and Anger. Thankfully, however, the play is not flatly extolling the virtues of putting on a happy face. A skydiving instructor waxing poetic about leaping from planes and hurtling toward the earth hints at the play’s true core.

“It’s just like life!” he says. “You get shoved out into nothingness. Then it’s a long terrifying free fall to certain death! Which is why you gotta pull the ripcord baby! Slow yourself down and look around while you can!”

Bitter Abby has lost her ability to taste, a side effect of a medication. Her favorite dessert, peach cobbler, feels like paste in her mouth. Hodges gives subtle life to Abby’s journey back to finding a zest for life, quietly replacing her broken heart with hope for the future. Lindsay-Abaire’s play is about grappling with the ripcord, jerking ourselves free of a blind and vicious plummet to briefly bask in the view, the laughter of a true friend or even the taste of peaches.