Walnut Hills' long-awaited Esoteric Brewing will host its grand opening the weekend of Sept. 4-5, adding to an already packed local craft brewery scene. However, it won’t be just another brewery. Esoteric lead brewer and CEO Brian Jackson is the brainchild behind the project, which he announced in 2017. A decade ago, he was majoring in pre-med at the University of Cincinnati, but when he tried a Bell’s Pale Ale at Columbia Tusculum’s Stanley’s Pub, his life changed. “That was an a-ha moment,” Jackson says. “I had never had craft beer like that before. I was sitting at the bar and was looking at my phone: ‘How do you brew beer?’ Maybe I could do that for a living?” Realizing the connection between science and brewing, he bought a home brewing kit and started brewing beer in his mom’s kitchen. He eventually landed a job at local Cavalier Distributing, and several years ago started working at MadTree. Wanting to open his own brewery, Jackson enrolled in Over-the-Rhine business accelerator MORTAR’s entrepreneurship program; through it he met and partnered with Marvin Abrinica. Abrinica wasn’t enrolled in MORTAR — he runs a local crowdfunding portal called Wunderfund. Together, they raised almost $800,000 for Esoteric through crowdfunding. That enabled them to move into and revitalize the 1930s Art Deco Paramount Building, which was once a department store but had been fallow for decades. They’ve been working on rehab with the help of the Walnut Hills Redevelopment Foundation, The Model Group and New Republic Architects. The Paramount Building is part of a multi-million-dollar redevelopment project, located at Peebles Corner in Walnut Hills, called Paramount Square. The project already contains some bars and restaurants and will eventually have residences. The Port describes the “community-driven” revitalization of the area as “an emerging commercial district punctuated by minority-owned microenterprise.” That descriptor highlights one thing that sets Esoteric apart from other Cincinnati breweries: Jackson is Black and Abrinica is Filipino. Esoteric will be the first minority-owned brewery within Cincinnati’s city limits. (Blue Ash’s Queen City Brewery of Cincinnati had minority owners, but it shuttered last year.) “We definitely feel like breaking through glass ceilings are a good thing,” Jackson says “Not having many Black-owned or minority breweries in Cincinnati, it’s a great thing. It feels like we’re starting to diversify and bring in more people to the brewing scene.” A 2018 Brewers Association survey discovered that 85 percent of craft beer drinkers are white. “I don’t think it’s ever been something that’s been targeted toward a more diverse crowd,” Jackson says about the industry. “And whether or not it’s because people might walk by and look inside and see that there’s not a lot of people who look like me and a lot of my friends aren’t going there or working there.” But Esoteric advocates for a diverse crowd, both in terms of employees and customers. With the brewery’s design, Jackson and team continue to buck the system: They will not install TVs in the taproom. “A lot of breweries feel like garages,” Jackson says. “They have a cold vibe to them. They’re loud and they’re not very inviting.” The 6,000-square-foot public space features an Art Deco speakeasy vibe, with lounge chairs and cocktail tables. Because the brewing equipment is housed in the basement, a viewing space has been carved out so customers can look down into the brew hub. Esoteric is starting off with draft-only traditional beers that reflect their lotus flower logo. The symbol is “a metaphor that represents the beauty that fights through adversity to rise out (of) the ashes,” reads the website. More important than the beer is Esoteric’s ethos of driving social change. “We want to be more than just a brewery,” Jackson says. “One of the reasons I wanted to get into business or pre-med was because I always wanted to help people and create some sort of positive social change. The vision ultimately is to leverage our resources to make some sort of positive impact. I know a lot of breweries out here are doing a lot of great work. They’re supporting their communities and supporting nonprofits. We want to do the same, although we want to take it a step further in having a direct impact on people’s lives for the better.” Some of those proposed initiatives include helping people register to vote, paying employees a living wage, holding a job interviewing seminar and donating books to local schools. “Right now, the market seems to be slowing down,” Jackson says. “We’re getting into it a little late. But we want to have a good time and not say the bottom line is more important than the culture.” Esoteric Brewing is located at 900 E. McMillan St., Walnut Hills.
Photos by Hailey Bollinger
Scroll down to view images 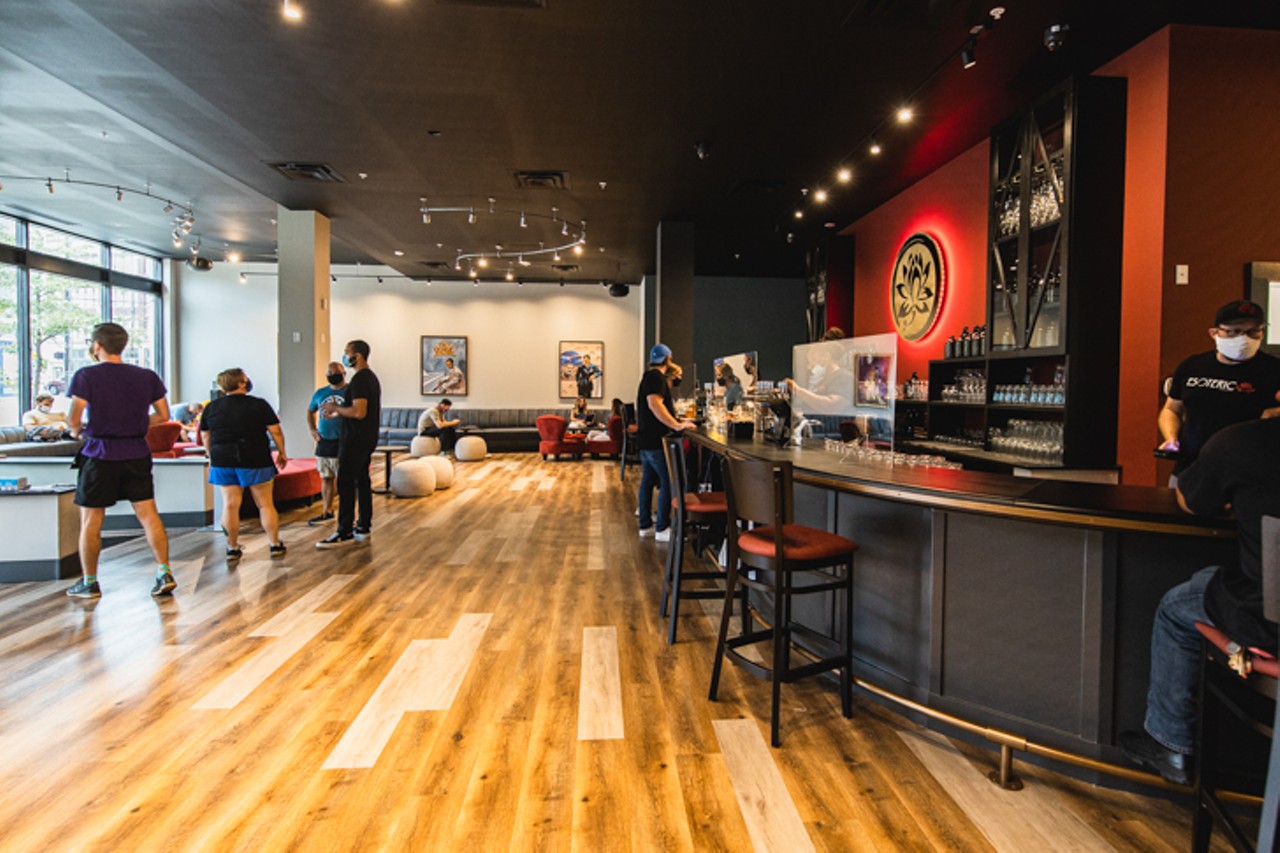 Hailey Bollinger
Esoteric has revitalized the 1930s Art Deco Paramount Building, which was once a department store but had been fallow for decades. The Paramount Building is part of a multi-million-dollar redevelopment project, located at Peebles Corner in Walnut Hills, called Paramount Square. 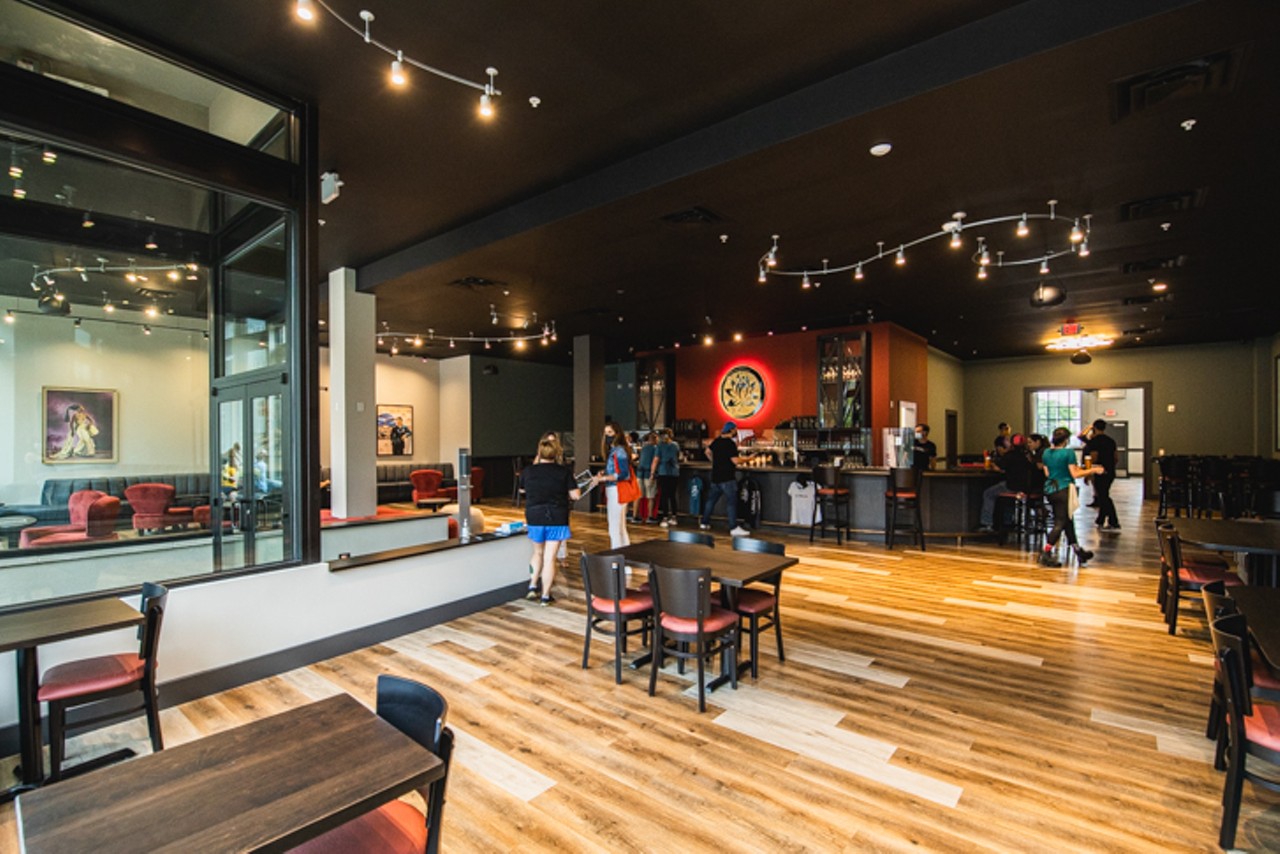 Hailey Bollinger
The bar. Esoteric is starting off with draft-only traditional beers that reflect their lotus flower logo. The symbol is “a metaphor that represents the beauty that fights through adversity to rise out (of) the ashes,” reads the website.

Hailey Bollinger
“We definitely feel like breaking through glass ceilings are a good thing,” Jackson says “Not having many Black-owned or minority breweries in Cincinnati, it’s a great thing. It feels like we’re starting to diversify and bring in more people to the brewing scene.” 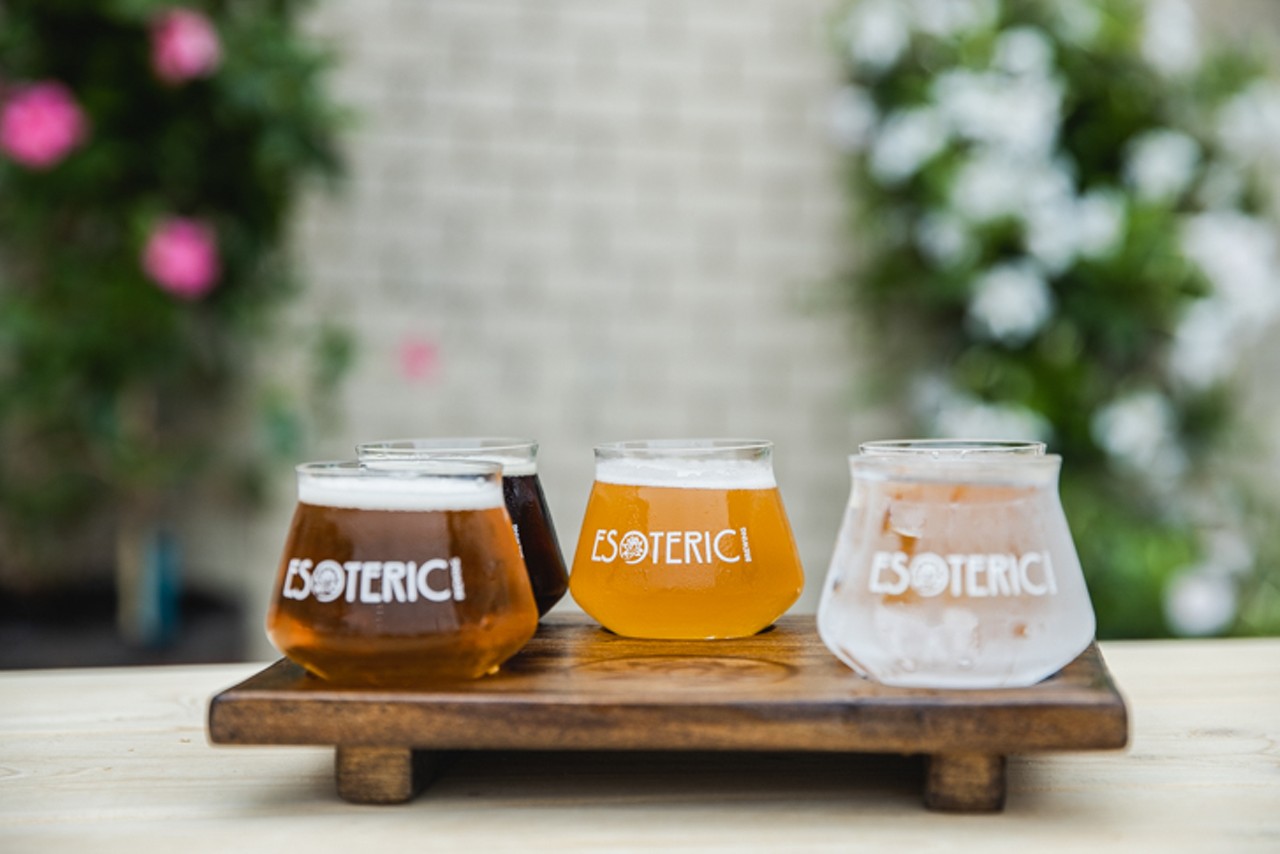 Hailey Bollinger
A flight of beers