Anjou's most popular drink is the Benedetto Alfieri, with red pepper, shallot and basil.

The first time I went to Anjou, an intimate cocktail bar in East Walnut Hills that opened in June, the world seemed like it might be starting to right itself in the wake of the pandemic. Vaccines were finally widely available, and the Centers for Disease Control and Prevention even said, “What the heck, take the mask off.”

While I donned a mask to head to Anjou this time around, it was no less pleasant an experience.

Located in a cozy nook on Woodburn Avenue, formerly housing Woodburn Dry Cleaners, Anjou comes to us from Chris Wolfe, Andy Smith and Brad Lauck. Pre-pandemic, the trio had a different project in the works in Walnut Hills proper. When Urban Sites contacted them about the Woodburn space, they knew it had potential.

“We wanted to do something different than your average cocktail bar,” says Wolfe, whose history in the service industry includes stints with Sotto, Top Golf and Dewey’s. “We try to make our drinks approachable. The big thing we look for is familiar flavors introduced in a different way.”

Anjou’s cocktail menu lives up to that credo. The names are clever, the ingredients are interesting and, yes, they’re often familiar. What’s more, the whole thing seems fun. Cocktail bars can feel so forced sometimes, hamstrung by a theme or a concept. Anjou has all of the charm with none of the pretension. It does have a broad conceptual underpinning: the bar’s name comes from Margaret of Anjou, wife of King Henry VI. 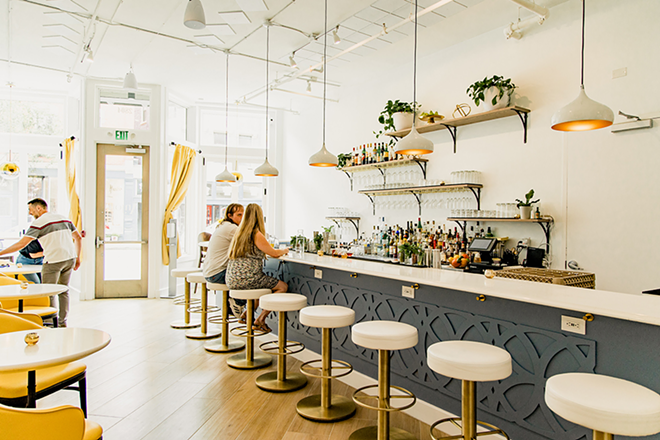 Photo: Hailey Bollinger
Anjou is located in the space that once held Woodburn Dry Cleaners.

“The building we’re in is called ‘The Henry,’” Wolfe says. “Henry VI at one point went crazy, so during that time Margaret ruled all of England and parts of France.”

The pair were central figures in the Wars of the Roses, an uprising against Henry’s reign in the 15th Century. Margaret led armies to retrieve Henry after his capture by Richard of York. Anjou’s decor subtly calls to mind powerful women, like Margaret herself. The bathroom’s wallpaper features black line drawings of confident nude women, and there’s a minimalist floral component throughout the bar, with large grayscale flower wallpaper adorning the main wall and several colorful floral portraits.

“We want it to be a sexy spot,” Wolfe says. “They’re sexy women, but they also have this power about them.”

The floral motif extends to several of the drinks, if not overtly — though several of them have botanical incorporations — then certainly at least in color and composition. The She-Wolf is a delightful concoction, featuring Old Tom Gin and pear, ginger and elderflower liqueurs. It is a vivid purple color and comes served in a tumbler with a rose-shaped ice cube.

Photo: Hailey Bollinger
The She-Wolf, with Old Tom Gin and pear, ginger and elderflower liqueurs. It is a vivid purple color and comes served in a tumbler with a rose-shaped ice cube.

“It probably has the most pictures out there because it’s a purple drink, it has a rose ice cube in it, but it’s called the She-Wolf because in Shakespeare’s play Henry the VI, he actually refers to Margaret of Anjou as a ‘she-wolf,’” Wolfe says. “The drink features ingredients from England and France, the color is purple, to signify royalty, and it has the rose in there to signify the Wars of the Roses.”

Anjou’s most popular drink, according to Wolfe, is the Benedetto Alfieri, which remains the only cocktail I’ve ever had that prominently features red bell pepper. It really is a fun trip to flavortown, layered and fresh, zingy and bold. I’ve never had anything quite like it.

“It kind of expresses what we do here,” Wolfe says. “It has basil, shallots and red bell pepper — so things you’re familiar with, but maybe not in a cocktail. We boil the shallots and let them simmer and use that water and add sugar to it to make a simple syrup. It really speaks to what we do because it’s about the fresh ingredients, about the familiar taste you might not be used to in a cocktail.”

Photo: Hailey Bollinger
The bar's most popular drink is the Benedetto Alfieri, made with basil, shallots and red bell pepper.

Other cocktails I sampled include A Ghost of Time, with smoky mezcal and blood orange rooibos tea, and one that’s coming up for the fall season called Once An Island. This one tasted like the pumpkin spice latte’s sexy Mediterranean cousin, with pomegranate, chai, cardamom and, my absolute favorite, smoked cinnamon on top. Cocktails have really leveled up in 2021.

Anjou also offers zero-proof cocktails, wine and beer. A few new cocktails are coming at the end of September, but there’s not necessarily a set seasonal menu.

“We don’t do a set spring/summer/fall menu or anything like that. We really focus on the ingredients. Are they fresh at the time?” Wolfe says. “It’s really based on what the essence of the drink is.”