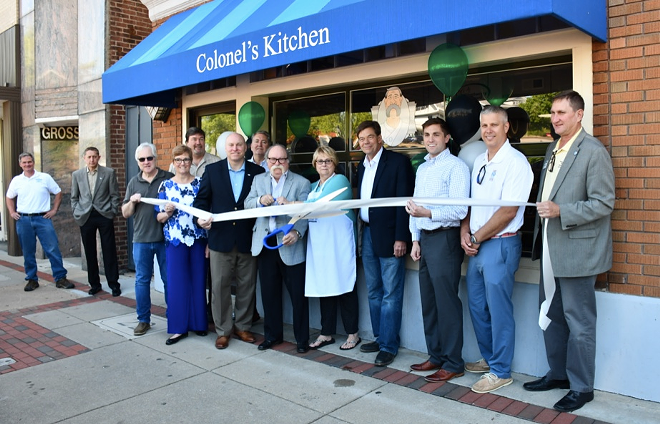 Colonel De Stewart and his wife, Susan, have opened the next iteration of their spice empire: Colonel's Kitchen, a breakfast and lunch spot in the heart of Fort Thomas.

The sit-down eatery will feature a from-scratch kitchen that focuses on farm to table, with a kick from Colonel De's cult favorite gourmet herbs and spices. "Everything that we fix, we'll be using our spices and blends," said Stewart in a press release.

There will be a core menu of regular items and rotating specials based on the season and the whims of the chefs. The current iteration of the menu available on Facebook lists biscuits, salads, sandwiches and soups with dishes like the Jam Packed, featuring housemade fennel-apple-butter-stuffed French toast and maple cream; Not Your Mama's Veggie Burger, with baked falafel, roasted peppers, harissa crema and arugula on a housemade roll; and the Goetta Life biscuit with housemade goetta, soft scrambled egg, tomato jam and cheddar. 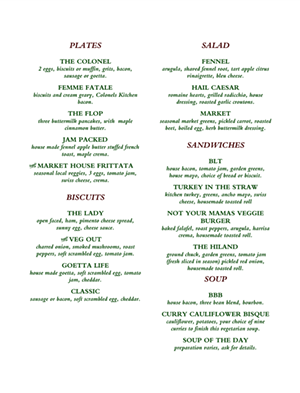 "Our chefs are extremely excited to stretch their wings," Stewart said. "They are like little kids at Christmas right now."

The six chefs — including Matt Buschle (formerly of Virgil's Cafe in Bellevue), Jeff Hyde and Doni Atterbery — have a total of 150 years of experience in the kitchen. Buschle will be taking the helm during weekend brunch.

Breakfast and lunch will be available 7 a.m.-2:30 p.m. Monday-Friday and brunch will be served 10:30 a.m.-2:30 p.m. Saturday and Sunday. The space, which is described as having a "trendy industrial decor," holds about 50 guests. Patrons order at a counter, then sit down and have their food brought to them — similar to the fast-casual set-up at downtown's Maplewood. Food will also be available for carryout.

At night, Colonel's Kitchen can be rented for private parties. "It's going to be a restaurant by day and an event center by night," Stewart said.

Colonel De's has been headquartered in Fort Thomas since 2016 and also recently celebrated 12 years at Findlay Market.