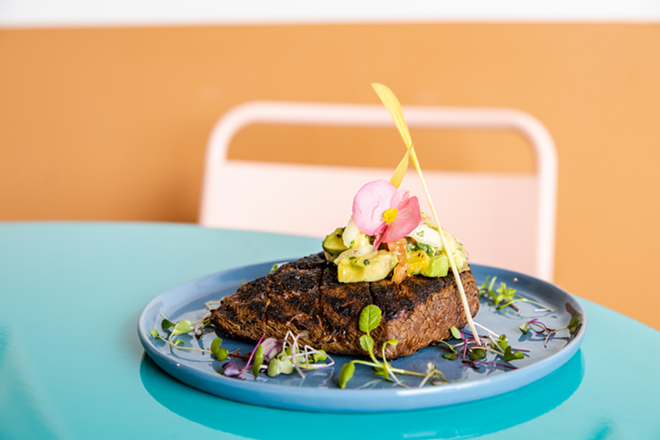 After Newport's Baker's Table landed a spot on food and dining website Eater's recent best new restaurants in America round-up, Cincinnati has attracted some more attention from the publication.

Eater reached out to local food writer and educator Grace Yek to explore the Queen City's hottest restaurants right now. The spectrum of restaurants spanned from the northern suburbs to Northern Kentucky and featured a variety of eateries ranging from casual spots like Noodle & Hot Pot to higher-end restaurants like Branch.

“The revitalization of Over-the-Rhine that began more than 10 years ago helped to launch a food renaissance that’s grabbing the nation’s attention,” Yek explains in the article. “More and more, we’re seeing chefs from the bigger cities move here. If you’re an ambitious chef in New York, D.C., or Chicago, why wouldn’t you launch your restaurant in Cincinnati? The city is still relatively affordable and family-friendly, and there is a genuine sense of camaraderie among the chefs.”

1. Noodle & Hot Pot: "Wedged in a sleepy strip mall in Cincinnati’s northern suburbs, this spot is hopping with fans craving hot pot. Owners Yuke Qiu and Jennifer Niu spare no expense on the soups that make up the menu’s backbone, sourcing them from a chef in Qiu’s hometown in China. The chef creates seven different bases with hard-to-find ingredients, then packages and ships them to the restaurant. The 'nine boxes spicy' soup, for example, includes chunks of beef fat, amplifying heat and flavor. Among the 80-odd choices of ingredients to dunk into the hot pot, the 'one meter-long lamb' stars, with thinly sliced organic lamb arrayed on a wooden paddle." 4750 Fields Ertel Road, Landen, facebook.com/hotpotohio.

2. Tortilleria Garcia: "Fans are showing up in droves to this new fast-casual spot in College Hill, the second location of Tortilleria Garcia in greater Cincinnati. Owner Omar Garcia faithfully recreates the food he grew up eating in Michoacán, Mexico, including tacos, tamales, rotisserie chicken, and burritos, but his tortillas are the real MVPs. Every day the cooks press fresh masa from boiled corn. The tortillas have become such a thing that customers can buy packs of them separately. Top off a meal with homemade aguas Mexicanas like hibiscus tea, pineapple water, and horchata." 5917 Hamilton Ave., College Hill, tortilleriagarcia.us.

3. Lonely Pine Steakhouse: "Route 66 and roadside steakhouses are alive and well in this nostalgic, counter-service stop in Pleasant Ridge. Lonely Pine is decorated in a mix of midcentury decor and rugged accents from the American Southwest. The steaks, dry-aged in house, are the main course here. (Don’t look for chicken or fish.) The restaurant is the latest production from parent company Gorilla Cinema Presents, known for its bold thematic bars such as Tokyo Kitty, a downtown karaoke spot fashioned after Lost in Translation, and the Overlook Lodge — the group’s first bar, inspired by The Shining, next door to Lonely Pine." 6085 Montgomery Road, Pleasant Ridge, lonelypinesteakhouse.com.

5. Branch and Night Drop: "The restoration took more than two years but the once-vacant Central Trust Bank branch in East Walnut Hills has found new life as a high-end restaurant. While the building’s art deco design and stately interior hint at its past, the emphasis these days is squarely on food and drink. Executive chef Shoshannah Anderson’s menu is refined and global but always grounded. The food ranges from Israeli chickpea salad to diver scallops with pork belly, roasted radish, and orange curd. Pair dinner with themed cocktails like the Cosigner or Trust Account, or head downstairs for a nightcap at the Night Drop bar in the venue’s cozy basement."1535 Madison Road, Walnut Hills, eatatbranch.com.

6. Social OTR: "At Social OTR, you can eat high-end food and fill up on a socially driven mission. The restaurant employs interns from the Findlay Culinary Training program, creating opportunities for the community’s underemployed residents, including those grappling with poverty or criminal records. The menu ranges from snacks to large plates, including choices such as bacalao croquettes and charred octopus. The Alley at Social, the restaurant’s second bar and dining space, also offers happy hours to encourage community engagement."1819 Elm St., Over-the-Rhine, socialotr.com.

7. Holiday Liquor Bar and Forty Thieves: "Powerhouse couple Dan and Lana Wright just expanded their restaurant empire with a no-frills bar connected to a walk-up Middle Eastern street-food counter. Conveniently situated by the streetcar stop at Liberty and Race, the counter offers a low-key version of the Wrights’ upscale Middle Eastern-inspired restaurant, Abigail Street. While the offshoot, Forty Thieves, skews more casual than its older sister restaurant, Dan Wright’s precise culinary skills still shine in killer shawarma, falafel, succulent grilled chicken, and shakshuka. Over in Holiday Spirits, a large U-shaped bar floats in the middle of the space like an island, from which bartenders serve a menu of slushy drinks and novel cocktails. Arcade games, pool tables, and a large outdoor patio make the bar-restaurant combo an easy choice in this neck of Over-the-Rhine."1538 Race St., Over-the-Rhine, fortythievesgang.com.

8. Wódka Bar: "Since 2012, Sarah Dworak has garnered a devoted following at Babushka Pierogies, the Findlay Market store where she serves dumplings stuffed with tasty fillings both traditional (potato-cheddar) and whimsical (lentil Cincinnati chili). With the beautifully bedecked Wódka Bar, Dworak brings even more of her Eastern European heritage to Over-the-Rhine. The striking oversized, backlit stained glass window hanging over the bar shines down on other old-world design elements like rich wood paneling, velvet upholstery, and deep jewel tones. The restaurant and bar specializes in house-infused vodkas and Eastern European bites such as caviar puff pastries, smoked salmon and herring, and pierogies, of course." 1200 Main St., Over-the-Rhine, wodkabarotr.com.

9. Zundo Ramen & Donburi: "Slurp-worthy bowls make Zundo the new go-to for ramen in Over-the-Rhine. The restaurant’s traditional 14-hour broth, along with flavor-amping ingredients like pork belly and soft-boiled egg with custardy yolk, underpin the ramen options, like the stellar tonkotsu. Meanwhile, donburi choices range from pork katsu to curry to unagi. The large selection of sake pairs perfectly with anything from the standout food menu." 220 W. 12th St., Over-the-Rhine, zundootr.com.

10. Crzy Monk: "Step inside Crzy Monk and step out of the ridiculous pace of life. Huit Restaurant Group opened this restorative, pan-Asian restaurant just around the corner from the Aronoff Center for the Arts and just up the block from the group’s Chino-Latino sensation Lalo. In the chic yet casual space, diners calm and center themselves with dishes like Mother Earth Salad. That’s just one of the creative, playful items on the vegan and vegetarian menu, which also includes options like a bao-wich and a Cleansing Noodle Soup that sports honeydew and vegan mock ham." 627 Main St., Over-the-Rhine, facebook.com/monkcincinnati.

11. Fausto at the CAC: "Tucked inside the Contemporary Arts Center downtown, Fausto at the CAC effortlessly complements the avant-garde building with a space that’s elegant yet ever-so-slightly edgy. After working in California for years, owners and brothers Tony and Austin Ferrari return to Cincinnati to dish up seasonal, light, locally sourced fare. Look for the brothers’ custom-label coffee blend — part of their collaboration with Cincinnati-based Deeper Roots Coffee — and Ferrari Bros rosé, a pinot noir made in California." 44 E 6th St., Downtown, faustoatthecac.com.

12. The Baker's Table: "In 2019, the Baker’s Table secured a spot as one of Eater’s Best New Restaurants in America, making it a magnet for travelers. But for Cincinnati residents, this daytime restaurant simply offers an inviting brunch just across the Ohio River in Newport, Kentucky. The space is filled with breezy vintage charm and natural light from a distinctive window-filled garage door. The thoughtful, sustainable menu showcases the seasonal bounty from local farms, and even the bread is made from scratch. Add to that a full bar and specialty espresso drinks, and it’s easy to see why fans make a beeline for this adorable spot every weekend."1004 Monmouth St., Newport, bakerstablenewport.com.

13. Yonder: "Tess and Chris Burns, husband-and-wife owners of Commonwealth Bistro, are huge nature lovers. They share their love for the great outdoors via their new lush, woodsy rooftop space, Yonder, which features a full bar serving a fun list of cocktails and mocktails. To eat there are playful, seasonal takes on bar bites like wings and deviled eggs, all made with locally sourced ingredients." 612 Main St., Covington, commonwealthbistro.com/yonder.

14. Libby's Southern Comfort: "This Southern restaurant is just across the Ohio River from Cincinnati in Duveneck Square. Bright, modern, and homey, the interior of Libby’s Southern Comfort is as charming as the food coming out of the kitchen. The menu is a fusion of Kentucky and Charleston comfort staples such as fried chicken, shrimp and grits, and fried green tomatoes. Be sure to order Libby’s hush puppies with goetta and sample the selection of vintage bourbon and boozy slushies." 35 W. Eighth St., Covington, libbyssoutherncomfort.com.