How to Eat Cicadas

Eating locally grown food is an important way of life for many people. But how many locavores’ diets will include the forthcoming Brood X cicadas, which are soon due to emerge after 17 years underground? 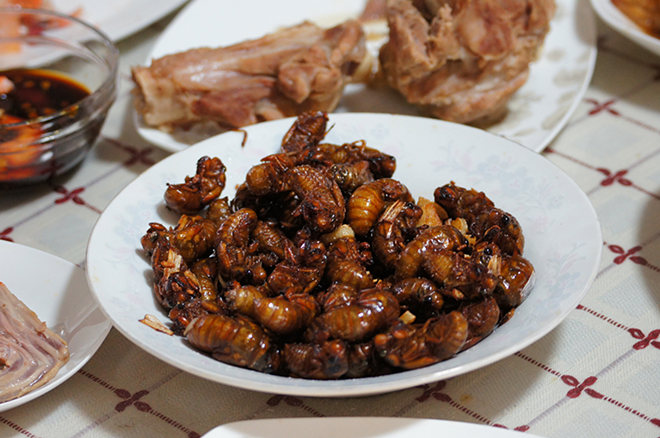 Eating locally grown food is an important way of life for many people. But how many locavores’ diets will include the forthcoming Brood X cicadas, which are soon due to emerge after 17 years underground?

The cicadas of the 17-year Brood X are edible for humans, prominent entomologist and local cicada expert Gene Kritsky, Ph.D., says. In fact, cicadas are a clean, sustainable, vegetarian insect packed with protein.

This food source holds great significance to many cultures. According to a story on onondaganation.org, the Onondaga Nation’s dependence on cicadas (or Ogweñ•yó’da’) was a vital component to their survival when George Washington’s troops decimated their homes and crops. Exiled and under constant threat of attack, the Onondaga Nation saw the emergence of cicadas as a gift among sorrows.

Cicadas tend to be fried and eaten whole, though other methods are available, including cicada powder that’s similar to the protein-packed cricket flour seen in many kitchens these days.

Kritsky references a cicada and rhubarb pie recipe published in the Cincinnati Enquirer in 1902. The recipe calls for 50 white female cicadas shortly after they’ve emerged — just remove their wings, legs and heads, and mix them with breadcrumbs, dairy and rhubarb. Pour the mixture into a pie crust and bake it. The pie’s flavor is noted to be like partridge, and the recipe is credited for “good eating.”

Another cicada dish instructs cooks to marinate the insect overnight in Worcestershire sauce and fry them the next day in a lightly seasoned batter. The dish is said to taste like chicken.

Cicadas also are considered to be a simple shrimp replacement in dishes, and can be spiced and boiled, stir-fried or roasted.

Local pizza staple Snappy Tomato Pizza even made a jingle that first aired in 1987, featuring “Snappy Cicada Pizza.” The lyrics were changed from the classic Snappy Tomato Pizza theme, saying, “We choose the freshest cicadas in town / When we run out we pull more from the ground.”

Snappy Tomato didn’t actually put cicadas on its pizza then, and it won’t this year, but the pizzeria is bringing the song back for Brood X.

“We partnered with WEBN in 1987 and made the cicada jingle, brought it back in 2004 and will be bringing it back on the air waves (in 2021),” says Andy Ritter, Snappy Tomato’s director of marketing. “No cicadas, just excellent pizza.”

Kritsky has a few tips for Cincinnatians who want to experiment with cicadas as a food source. Be sure you can properly identify anything you intend to eat, Kritsky says. Only gather live cicadas; do not pick up dead ones. And look for the females (remember, the males are the cicadas that do the “singing”).

One more warning before you forage for your own cicadas: In 2004, researchers from the University of Cincinnati’s College of Engineering found high levels of mercury in Brood X bugs — about  0.02-0.20 parts per million. Just as you would heed advice from the EPA and FDA about consuming fish that contain large amounts of mercury, you should be careful before ingesting copious cicadas.

If you want someone else to do the bug collecting for you, visit Jungle Jim’s. While Kathy Lane, general manager of creative services, says they most likely won’t have edible cicadas in stock this year (most of their insects are farm-raised in Thailand), they do offer other bugs which you can eat dried or in snack items like candy and chips.