From a new food park and a taco pop-up to a Southern-style kitchen and Filipino-fusion breakfast trailer, here are nine new places to eat. 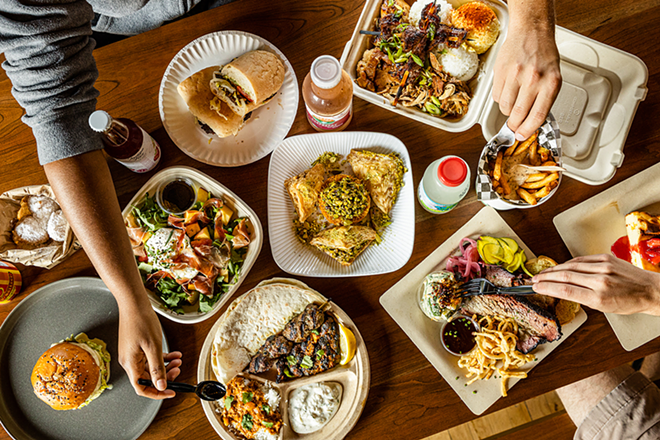 Summer is here, and Cincinnati’s food scene is heating up. Here are nine recent additions if you’re looking for somewhere new to eat. 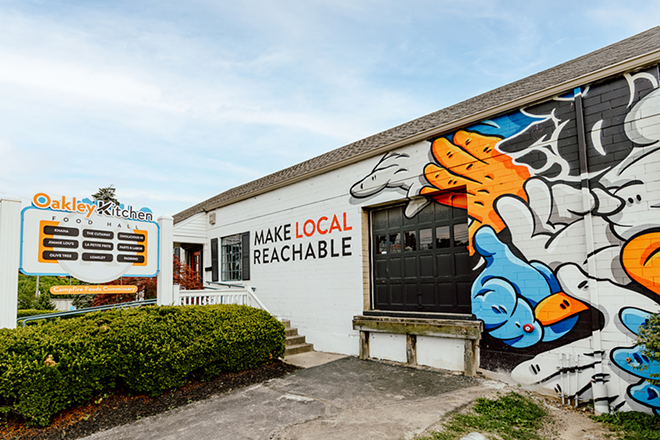 Greater Cincinnati’s culinary scene is rapidly expanding, and with the opening of incubator kitchen and event space Oakley Kitchen Food Hall, area chefs and food entrepreneurs have the opportunity to develop their ideas, skills and products even further.

The first floor of the joint-use space features eight kitchen pods for start-ups and ghost kitchens, plus the Campfire Foods Commissary and a marketplace offering products from both new and established local businesses. All eight kitchen pods are currently occupied by:

You can grab a cocktail from The Cutaway while you enjoy eats from any of the eight pop-up kitchens, or grab their food (or The Cutaway’s drinks) to go. There’s also indoor seating and outdoor picnic tables. 3715 Madison Road, Oakley, oakley-kitchen.com. Squeezed into a bite-sized vintage trailer, husband-and-wife duo Nate and China Kautz are serving up mobile breakfast sandwiches as the owners of the new Cincinnati-based pop-up Cackleberry (a nickname for a hen’s egg).

Cackleberry currently offers six unique sandwiches ranging from Cincinnati staples to Filipino-fusion cuisine. Cackleberry’s “Benny” bacon sandwich has chipotle ketchup and caramelized onions; the “Lolo” features a sweet Filipino sausage called longanisa and atchara pickled slaw; and the “Porter” is loaded with goetta. The food truck parks in various locations on weekends and operates until all sandwiches are sold out.

Though it is a mobile shop, China says she wanted people’s experience with Cackleberry to be memorable, so they play music near the truck and sell merchandise, including T-shirts and ceramic cups with egg art on them. See a full menu and find where they’ll be next at eatcackleberry.com.

Food parks seem to be the next big trend in dining, with spots like Bridgeview Box Park and Covington Yard opening in Greater Cincinnati in the past year or so. Now, Cincinnati’s deep East Side has their own and it is “one of the largest outdoor beer and live music venues in the Tri-State,” according to a release.

Obviously, the location has undergone significant renovations since its days as a chili parlor. The space now features indoor and outdoor seating, including picnic tables, tables with shade umbrellas and tables set up in recreated pick-up truck beds; firepits; greenery; outdoor lighting; and a playground. 2792 Old State Route 32, Batavia, clearmountainfoodpark.com. Gulow Street is Northside’s new cozy-yet-sophisticated bar and restaurant. Located at the corner of Hoffner and Gulow streets (the establishment’s namesake), it’s a family operation owned by brothers/cousins Jonathan, Danny and Alex Mouch. The trio built the business with hopes of providing an approachable hub where folks can “gather, socialize, create memories and strengthen community,” says Jonathan.

The historic building has served many purposes over the course of its life, originally housing a saloon and later a metal fabricating company and showroom. But Jonathan says the space sat vacant for a long time before his team began its most recent transformation, which now boasts repurposed old doors, tin ceilings, beadboard, lighting fixtures and more comfy details.

The bar and kitchen sports a small but mighty food menu, offering seven dishes ranging from breakfast to dinner. Stand-out items include sesame noodles, a pimento-stuffed breakfast sandwich, rigatoni bolognese and a cheeseburger (on Tuesdays you can grab a $10 burger and draft beer during happy hour). The cocktail menu has four craft cocktails ranging in spirits from bourbon and vodka to gin, including a clever Carrot Moscow Mule, infused with carrot juice. The bar/restaurant has also converted a former garage into a dog-friendly patio. 1614 Hoffner St., Northside, gulowstreet.com.

A new flavor is coming to downtown’s Crown Republic Gastro Pub. On Tuesday nights, the restaurant group — which also owns Losanti Steak House and Rosie’s Cocktails & Pies — will host a special “La Cantina” pop-up inside Crown Republic. The Cantina will be open from 5-9 p.m. Tuesdays, with limited seating. Chef Johnny Curiel and owner Anthony Sitek are the masterminds behind the menu, which offers “a modern take on some traditional Mexican dishes,” says Curiel in a release. Dishes include corn elote, which “uses nixtamalized Heirloom corn from farmers in Mexico.” There are also tacos with fillings ranging from Baja fish and carnitas to suadero (smoked brisket), pollo asado and sweet potato. Entree-sized options include enchiladas verdes and chicken mole. All dishes are gluten-free. 720 Sycamore St., Downtown, crownrepublicgastropub.com.

The folks behind Covington’s Gutierrez Deli recently opened OLLA Taqueria Gutierrez on W. MLK Jr. Boulevard in Covington. The eatery serves up Mexican-style street food. The menu is stacked with tacos, burritos, nachos and “Guti fries,” with nine different meat/veggie options (including birria) to choose from, plus a couple of entrees, sides and drinks. 302 W. MLK Jr. Blvd., Covington, facebook.com/OllaCov. 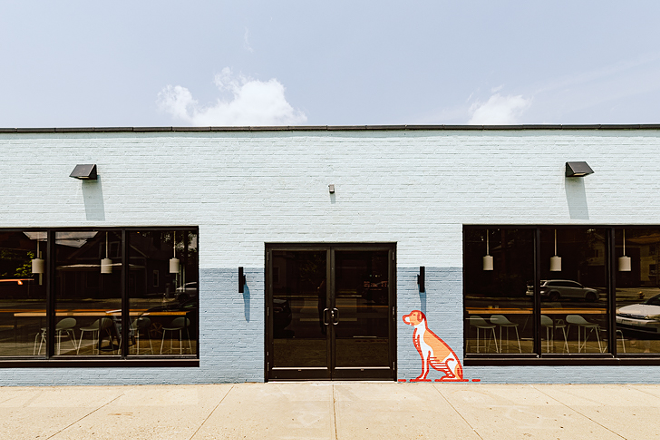 Located in a 4,000-square-foot warehouse, the café officially opened on June 26 — a milestone the team has been chasing for years. Since launching in 2019, Proud Hound has been helping Cincinnatians get their caffeine fix via pop-ups with its coffee truck and cart, wholesale operations, events and collaborations. The flagship location, complete with a coffee bar and full-service kitchen, also houses its roasting facility, viewable by customers through large glass windows.

Customers can expect all the usual espresso-based beverages — cortados, cappuccinos, americanos, lattes and mochas — alongside cold brews, pour overs and drip coffees. Not into coffee? The café also slings teas, hot chocolate and more. You can even order a picturesque blue matcha.

The kitchen, run by executive chef Kierstin Dudley, serves up Southern-centric breakfast and brunch with an emphasis on locally sourced ingredients and seasonal dishes. From the Nashville-chicken-inspired Nashy ’Nati Chicken sandwich to a Brekkie Banh-Mi, Korean Street Toast and a Cincinnati Love Letter with goetta, there’s much to devour. In addition to gluten-free offerings, vegan and vegetarian options are also available. 6717 Montgomery Road, Silverton, proudhoundcoffee.com. 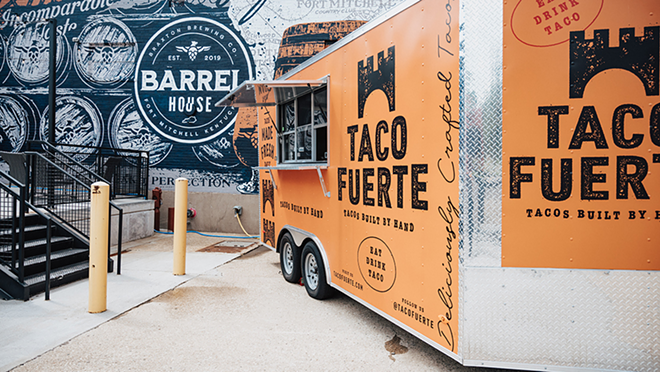 A taco truck has set up shop outside of Braxton Barrel House in Fort Mitchell. Called Taco Fuerte — from the Spanish word meaning “strength” — the truck boasts a selection of hand-crafted creations ranging from birria or cheesecake tacos to totchos and vegetarian-friendly bites. A release from Braxton says the truck’s menu was crafted to pair nicely with the brewery’s beers.

The truck is the third venture by Chef Mike Schieman and his team. Schieman opened two other restaurants that are positioned alongside Braxton Breweries: Parlor on Seventh in Covington and Pendalo Wingery in Pendleton. Taco Fuerte will be parked outside of the Fort Mitchell taproom Thursdays through Sundays. 5 Orphanage Road, Fort Mitchell, facebook.com/braxtonbarrelhouse.