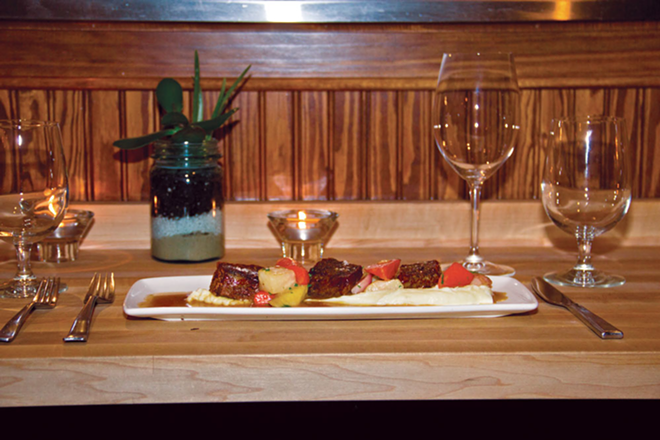 Red Feather Kitchen and Wine Bar comes from a partnership of three Ohio natives — chefs Brad Bernstein and Brett Crowe and sommelier Devon Barrett. Each has wide experience in the restaurant and hospitality industry and their friendship and shared backgrounds led to this new addition to the Eastside Cincinnati dining scene.

Located in the former Boca space in Oakley, Red Feather serves up from-scratch house-made dishes using the best possible ingredients. Described as New American, Bernstein says the partners wanted to create a chef-driven restaurant reflecting the diversity of the global influences they each picked up as they honed their craft. They also envision Red Feather as an unpretentious, approachable, neighborhood spot that serves “fun food that people enjoy,” Bernstein says.
I went with my husband and four friends on a recent busy Friday night less than two months after the restaurant opened. We arrived fairly early but the dining rooms were already filling up, and the bar definitely had the energy of a Friday happy hour. My husband and I elbowed our way in to try a cocktail while waiting for our friends.
The cocktail list ($9 each) includes “Vintage” drinks — such as Negroni, Sazerac and a Sloe Gin Fizz — and another section headed “Voguish.” From the vogue list, I ordered the Eastsider (bourbon, orange bitters, grapefruit and basil, among other ingredients), which was more fruity and less bourbon-y than I had hoped. My friend had better luck after we were seated with the After You (gin, dry vermouth, lime and roasted pear-thyme syrup).
The most noticeable interior changes at Red Feather include renovations to the front bar, where they removed the semi-circular bar from Boca days — chef Bernstein says it took up too much space — and installed a rectangular, antique oak wainscoting bar. The same oak now lines the far wall in the main dining room, an effort to “soften the tone of the restaurant,” Bernstein says. Otherwise, in addition to the front rooms, two smaller dining areas make up the restaurant, or guests can reserve seats at a counter in front of the open kitchen — which can make for an amusing evening, but also a sweaty one because of the proximity to ovens and grills.
Among the lighter appetizer options, we tried two of the salads: La Quercia Prosciutto (with arugula and kale, Marcona almonds and Manchego; $12) and Humboldt Fog Goat Cheese (field greens, pecans, roasted pears and dried cherries; $11). The goat cheese salad was more generous with the goodies, while the other was somewhat overloaded with greens and not quite enough protein. My husband raved about his butternut squash soup ($7), garnished with pumpkin seeds, pumpkin oil and apple-fennel compote. We also ordered the Hand Pulled Mozzarella ($9) — listed in a menu section labeled “To Share” — with grilled baguette and olive tapenade. The dish would have been improved with more of the tapenade than we got in our serving, but the flavors and textures worked together nicely.
For the most part, the entrées were well executed. The standout was my Short Rib ($26), consisting of fork-tender pieces of slow-cooked beef atop celery root mash with pieces of roasted root vegetables. Our waiter said this was becoming “a signature dish” in the restaurant’s short life so far, and I can see why. Two of our party opted for Crispy Skin Salmon ($23), which was another winner. Its Asian-influenced flavors included shiitake mushrooms, bok choy and zucchini pulled together with just the right amount of soy-bourbon glaze. My husband liked his Roasted Chicken ($19) with grits, roasted cauliflower and Brussels sprouts.
We found the Sweet Potato Agnoloti ($18) disappointing, however, with too many sweet elements including undercooked apple slices and not enough of the sage cream listed as an ingredient. My friend left most of it on her plate, but filled up on the house-made bread and surprisingly delicious butter. (We all raved about the butter; the table next to us ordered an extra helping of bread and butter for dessert.)
The service was efficient and nicely paced. Nobody hovered, and yet we didn’t have long waits between courses even though the restaurant was slammed. After a round of cocktails, we mostly ordered wine by the glass from a well-chosen selection that was fairly priced.
For dessert, we passed around an order of Apple Crumble — warmed and topped with a large scoop of vanilla ice cream — and Green Tea Panna Cotta with pomegranate coulis ($7 each). The dessert menu also includes a short list of ports and dessert wines by the glass, but we didn’t indulge.
Red Feather appears to be a unique and welcome entry to its neighborhood and worth a try even if you live elsewhere in the region. Reservations are essential on weekends and probably are a good idea on other nights, too.
Red Feather Kitchen and Wine Bar
Go: 3200 Madison Road, Oakley
Call: 513-407-3631
Internet: redfeatherkitchen.com
Hours: 5:30-10 p.m. Tuesday-Thursday; 5:30-11 p.m. Friday-Saturday; 5:30-9 p.m. Sunday; brunch 11 a.m.-3 p.m. Saturday and Sunday