Here's Everything U.S. President Joe Biden Ate During His Visit to Greater Cincinnati

Biden likes more than just ice cream, it turns out.

Ice cream apparently is not the only dessert that U.S. President Joe Biden likes.

Biden showed off his sweet tooth in Cincinnati on Jan. 4 right after delivering an address celebrating major federal funding for the improvements for the Brent Spence Bridge, which links Northern Kentucky with Cincinnati. Accompanied by Cincinnati mayor Aftab Pureval, Ohio senator Sherrod Brown and an entourage of secret service agents, Biden visited Just Q'in BBQ in Walnut Hills around 2 p.m.

According to White House reports, the president picked up a brisket plate, macaroni and cheese, potato salad, jalapeño cornbread and peach cobbler in to-go bags. That cobbler is what Biden was craving, it seemed, as he immediately opened the bag to sample the dessert.

"This is really good, seriously," the press pool reported Biden as saying.

Just Q'in, located at 975 E. McMillan St., is owned by Matt Cuff and hires workers who have barriers to employment or who need second chances. CityBeat readers frequently list it among their favorite barbecue restaurants in Cincinnati.

Pureval documented the president's visit to Walnut Hills in his Instagram stories. 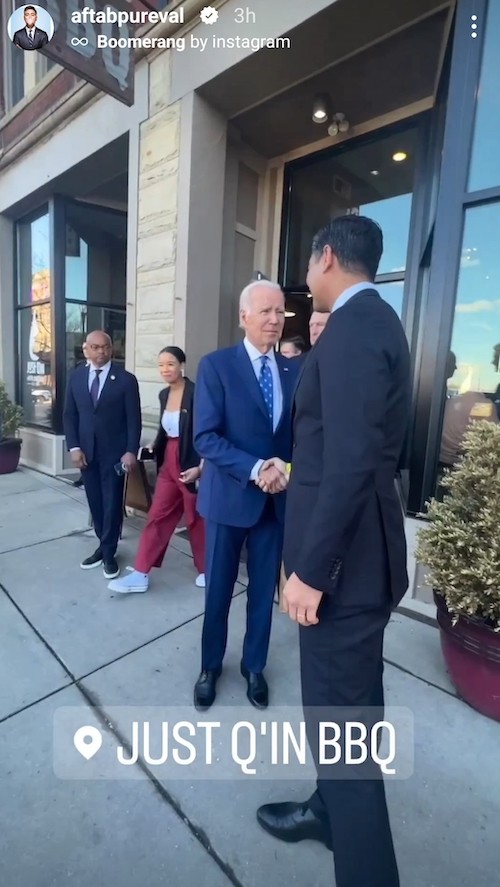 In November, Biden had another Cincinnati delicacy when Naomi Biden, his granddaughter, served chocolate chip Graeter's ice cream during her wedding at the White House.

"He used to be a Breyers guy all the way but we’ve gotten him to upgrade to Graeter's," Naomi Biden told Vogue magazine in a feature story.

Earlier on Wednesday, Biden was in Covington to celebrate the $1.635 billion award that the federal government is providing for the Brent Spence Bridge project. The funds, which were announced in late December and are part of the landmark $40 billion Bipartisan Infrastructure Law, will be used to repair the bridge and erect a toll-free, double-decker companion bridge nearby to help alleviate traffic between Cincinnati and Northern Kentucky on I-75. The BSB carries more than 160,000 vehicles per day corridor and is notorious for being the nation’s No. 2 bottleneck for freight trucks.

In May, Ohio Gov. Mike DeWine and Kentucky Gov. Andy Beshear jointly asked for nearly $2 billion from the Multimodal Projects Discretionary Grant, a program through the U.S. Department of Transportation.

Our Administration is in the business of building bridges. pic.twitter.com/H40d6YPXau

The Brent Spence Bridge project's overall plans and final cost estimates have changed several times. A revised plan now will slim down the project's footprint and free up more usable space to develop or improve nearby green spaces plus add bike and pedestrian amenities

The project is expected to break ground this year, with "substantial completion" happening by 2029, a release from Beshear said. The Federal Highway Administration estimates that the project will total about $3.6 billion.