Primavista is renowned among professional foodies for its longtime chef, Chris Prince. 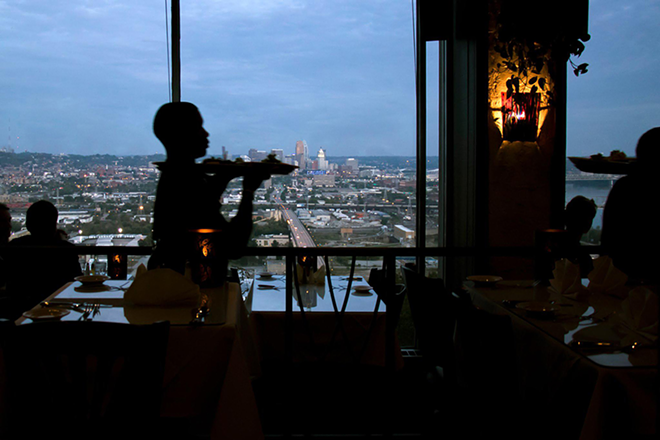 Photo: facebook.com/primavistarestaurant
The view from the dining room at Primavista

The panorama of our city from the vantage point of Primavista restaurant atop East Price Hill never loses its impact.

When a host escorts you into the dining room at this 30-year-old eatery, you can’t help but marvel at the tableau that greets you through floor-to-ceiling windows that face east into downtown. If you’re dining at dusk, you won’t see the sun as it sinks below the horizon — it’s behind you — but you can observe a breathtaking scene as the last rays of the day color the urban core. Perched high above the noise and stress of the streets below, you will appreciate the beauty of the Queen City.

After years — make that decades — of practice, the staff functions as a well-oiled machine and produces a dinner experience that most likely will be close to flawless, service-wise. This is no small accomplishment in the era of shortages of kitchen and front-of-the-house workers. How comforting to know that you can still feel pampered in a cozy dining room that seems like it’s in the clouds.

You do have to find your way up there, though, so use your phone GPS to take the guesswork — and wrong turns — out of the equation. The restaurant occupies street-level space in the Queens Tower condo building clinging to one of the steepest precipices on East Price Hill. 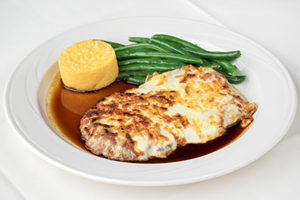 When I moved to Cincinnati in the mid-’90s and my new husband introduced me to this romantic dining room, this part of town was almost entirely residential. A few notable commercial establishments have joined Primavista in recent years in an area now referred to as the “Incline District,” including the Incline Public House, SOMM Wine Bar and the Incline Theater.

That development has been good for Primavista, according to co-owner Joan Lenkerd. More people from across the city have found their way to the neighborhood; overflow patrons from the Incline Public House next door have discovered Primavista and the neighboring eateries found ways to cooperate and support each other through the challenges of the pandemic. Lenkerd remarks that a synergy with neighboring businesses has contributed to a noticeable uptick in first-time and younger diners at Primavista.

“We still have a lot of regulars, and we love our regulars,” she says. “But we also love to see new diners.”

My friends and I weren’t new diners, although it was the first visit for one of us. After we managed to tear our eyes away from the bird’s-eye view of the city, our meal proceeded at a leisurely pace. There was no hustle from staff expecting a later seating, and it seemed that most tables would be occupied by one party for the evening.

Primavista is renowned among professional foodies for its longtime chef, Chris Prince. He has been at the helm for almost 30 years and has trained dozens of kitchen staff, many of whom have gone on to lead kitchens of their own. Joe Stalf, former executive chef at The Littlefield in Northside, said he worked under Prince for five years after studying at the Midwest Culinary Institute. “I learned so very much from Chris,” Stalf, now with Eckerlin Meats in Findlay Market, tells CityBeat.

I hesitate to call the cuisine at Primavista “retro,” but in fact there are a couple of dishes that brought back happy culinary memories. Consider veal, which used to show up often in fine-dining, Continental (meaning French or Italian, usually) restaurants. As soon as I saw Veal Piccata on the online menu, I knew what my entrée would have to be. One of my companions felt the same way about Veal Saltimbocca, another option along with Veal Marsala.

First, we shared a couple of appetizers with cocktails and glasses of wine. We liked the Bruschetta ($8.50) best, a simple combo of creamy goat cheese, honey and rosemary oil on toast pieces. Lots of restaurants offer bruschetta or something like it, but this version was truly delicious, with perfectly toasted, flavorful bread and a topping balanced between sweetness and umami.

It turned out that three of us partook of veal that night when another added veal meatballs to his Penne Cionni ($23), a vegetarian preparation with roasted tomatoes, mushrooms and gorgonzola. Both the piccata and the saltimbocca ($34 each) came with steamed haricots verts and a small but tasty portion of polenta.  Alas, the vegetable was overcooked, which is easy enough to do with very thin green beans. I loved the polenta and would have liked about twice as much. 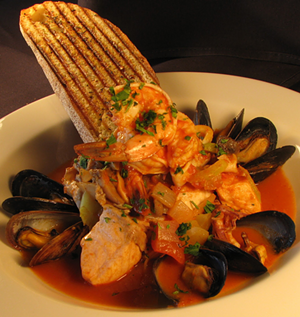 The standout among the entrees we sampled was a weekly special: Cioppino ($33), seafood stew served with an optional portion of linguine. The mélange of plump mussels, shrimp, calamari and white fish benefited from its spicy tomato broth enhanced by finely chopped mushroom, celery and onion. Although this dish wasn’t on the regular menu, it has sold well enough to become a menu offering, Lenkerd says.

The year 2020 was about survival for the folks at Primavista — banding together with similar businesses, ramping up carry-out operations, deep cleaning and installing an air filtration system and barriers in the dining room and bar.

Now, 2021 has brought new challenges. Staffing shortages and rising costs for ingredients and supplies inspired a streamlining of the dinner menu and closing on Tuesdays (in addition to Mondays), but Primavista so far is holding the line on raising prices.

“Chef does all the ordering, and he’s had to search for things that used to be easy to get,” Lenkerd says. “(Ordering) takes up so much more of his time now.”

On the other hand, Lenkerd feels good about the pared-down menu, which removed about one-third of the offerings in each category and kept the most popular items. The result has been a more efficient kitchen and smoother service, she says. Staffing hasn’t been a huge problem, either, in part because many of the restaurant’s longtime employees have returned.