As per usual, the restaurant world is always changing — and with COVID and the new year, 2022 is no exception. As per usual, the restaurant world is always changing — and with COVID and the new year, 2022 is no exception. Here are some recent openings and closings.

OTR Stillhouse
The OTR Stillhouse is a distillery, winery and brewery in one. Located in a former 1890s ice manufacturing warehouse, it’s also home to an entertainment venue with indoor and outdoor space. From entrepreneur Michele Hobbs (who launched PetWants) and partners including Master Distiller Chris Mitchell, a founder and former head brewer of Woodburn Brewing, and Dr. Tom Asquith, who worked as a whiskey scientist for Brown Forman, the in-house Knox Joseph Distillery produces award-winning gin, bourbon and blended whiskey. Describing itself as a “half-acre of relaxation within OTR,” the Stillhouse opened in December. In addition to cocktails, beer and housemade rootbeer and cream soda, the kitchen serves a small menu of smoked and grilled food, including smoked ramen, wagyu burgers and dashi boiled peanuts. 2017 Branch St., Over-the-Rhine, otrstillhouse.com. 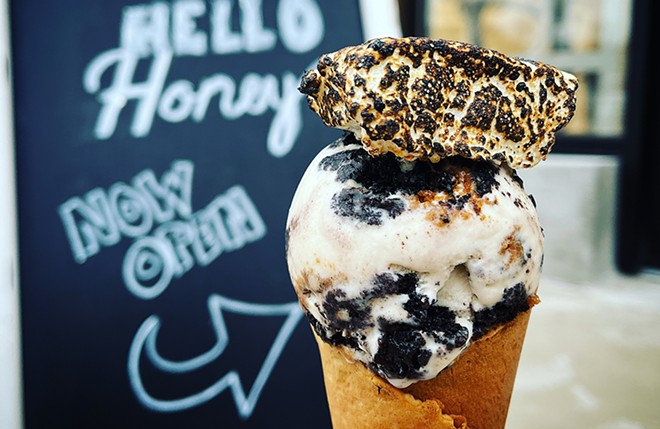 Hello Honey
Hello Honey has been serving up small-batch ice cream in the heart of downtown since 2012. Now, it has expanded into East Walnut Hills (and is moving the downtown destination to a new storefront soon). The cult-favorite ice cream is crafted with fresh ingredients and options rotate based on the seasons, with flavors including banana honeycomb, Thai iced tea and brown butter caramel. Every item in Hello Honey’s sugary portfolio is worth every single calorie, and it’s a necessity to top your scoop with one of the shop’s homemade, toasted marshmallows. 1530 Madison Road, East Walnut Hills, hellohoneyicecream.com.

Green District
Louisville-based build-your-own salad chain Green District is jumping into the Cincinnati market with a splash (or a crunch — whatever sound salads make). In July, Green District announced they would be setting up shop on Fountain Square — their first location in Ohio. That restaurant opened Jan. 11. But the company has also signed leases to open storefronts in two other area neighborhoods in 2022: Clifton and Blue Ash. The chain’s menu includes a handful of signature salads, plus wraps and bowls. You can also build your own from a selection of more than 50 ingredients and 12 Green District dressings. The menu also features salads with a local lean, like the 513, made with Grippo’s-spiced barbecue chicken, romaine, red cabbage, carrot, tomato, pickled jalapeno, cheddar, crispy onions, a barbecue drizzle and ranch dressing. 33 E. Sixth St. (in the Fifth Third Center lobby), Downtown, gdsalads.com.

Fuel
Taste of Belgium founder Jean-François Flechet has another restaurant concept up his sleeve, and this one doesn’t involve waffles. Flechet’s new eatery Fuel is aimed at providing “meals for healthy lifestyles that are nutritionally inspired,” per its description. Flechet launched Fuel this past spring as a ghost kitchen operating out of his Taste of Belgium bistro in Over-the-Rhine. Now, he’s secured a brick-and-mortar spot in the former location of Off the Vine juice bar that is slated to open soon.
Patrons can order from digital kiosks and build a custom bowl from the ground up using bases like lentils, quinoa or baby kale. According to the menu, proteins include tofu, grilled chicken or poached salmon. Add veggies — caramelized, roasted and/or fresh — and sauces or dressings, including harissa, coconut curry or apple-and-pear vinaigrette. Fuel will offer carry-out/grab-and-go and will also provide catering. Flechet hopes to get a liquor license to provide alcohol to go as well. 1218 Vine St., Over-the-Rhine, eatatfuel.com.

Mama's Mornings
Drawing inspiration from Andy Warhol’s “Birth of Venus” (modeled after Italian artist Sandro Botticelli’s original masterpiece), Mama’s Mornings is the pastry and espresso bar portion of a forthcoming larger concept from Northern Kentucky restaurateurs Emily Wolff and Paul Weckman (Otto’s, Frida 602, The Standard, Larry’s).
Chase Maus, who helmed the recently shuttered rose&mary bakery, is behind the menu of baked goods, which include goodies like tiramisu donuts, custard buns with polenta custard and pine nut croissant sticky buns. Mama’s itself is slated to open in 2022 with a menu that “draw(s) on the classics, but ‘brighten(s)’ them up,” Wolff tellsCityBeat. 621 Main St., Covington, instagram.com/mamas_mornings.

North South Baking Co.
North South Baking Company is slinging baked goods in a new home shared with Ludlow, Kentucky-based Bircus Brewing Company. For baker and owner Kate Nycz, it’s a dream years in the making. On any given day in the shop, visitors may find sweet or savory danishes, buns, cheese knots, brownies or cookies. For bread lovers, there are plenty of varieties to pick up here, too. One menu staple is the flaky, soft “cruffin,” a croissant-muffin hybrid filled with creams or jams. Nycz makes and sells baked goods during morning hours while Bircus takes the reins at night. 39 W. Pike St., Covington, northsouthbaking.com.

Swenson's
One of Ohio's most beloved hamburger joints finally is fully operational in Cincinnati. Established in 1934, Akron-based Swensons Drive-In largely operates on an old-timey drive-in model, in which patrons park near the restaurant and a server takes orders at their car window. The restaurant grills all food upon order, and the server then delivers it back to the car — something that has especially worked during the pandemic. 491 Ohio Pike, Union Township, swensonsdriveins.com.

Lobsta Bakes of Maine
Lobsta Bakes of Maine owner Kevin Smith told the Cincinnati Enquirer in December that he was ready to retire and the seafood spot would be closing in the new year. However, in a happy turn of events, Smith wrote in a post on the shop’s website that Lobsta Bakes would be getting a new start with new owners, catering manager Jim Radcliffe as well as Phillip and Emma Jones. Smith says Radcliffe not only manages the catering side of things but also has been supplying the seafood sold at Lobsta Bakes for 15 years. Husband-and-wife-duo Phillip and Emma Jones are originally from the United Kingdom but have been living in Cincinnati for three years. “I am excited that they have the expertise & passion to bring the British ‘fish & chips’ cultural tradition to complement the current Lobsta Bakes offering,” Smith writes on the website. 3533 Church St., Newtown, lobstabakes.com. 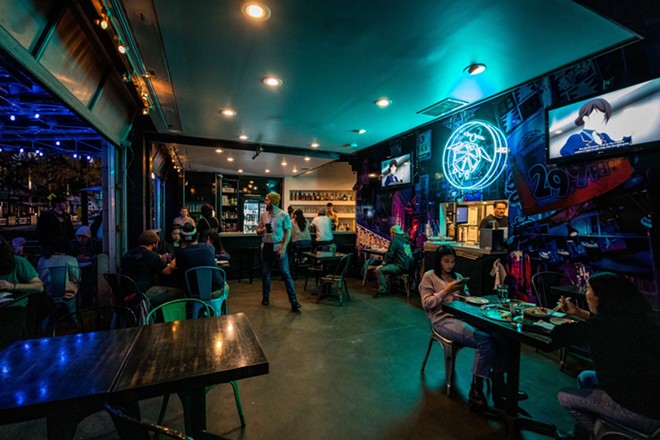 Quan Hapa
After completing renovations and reopening at the end of last year, Quan Hapa in Over-the-Rhine announced on Facebook that the restaurant will be closing for the moment to “re-staff and adjust some food/service/operations items to make Quan Hapa even better when we can re-open.” They said they do not have a timeline for reopening, but will be moving current staff to their other restaurant, Pho Lang Thang. Pho Lang Thang will be extending hours to include dinner Thursday through Saturday.

Boomtown Biscuits & Whiskey
Chef Christian Gill announced on his personal social media that the flagship Pendleton location of Boomtown Biscuits & Whiskey would be closing Jan. 23.
In a Facebook post, Gill said the closure was a result of fallout from the pandemic.
“Due to all of the surrounding circumstances that have plagued the industry over the last two years, it is untenable for us to continue in this environment,” Gill wrote.
Gill says Boomtown’s Union, Kentucky location will remain open “to provide 24k gold service and the consistency and high quality of the food we create.”
He ended his post saying, “There’s a lot to unpack with this closing and I ask that y’all come see us in these last few weeks. Share a biscuit and bourbon with us. Enjoy the Yukon and Grahams of Gold. Stake Your Claim while the gold is still here in Cincinnati.”

Empanadas Aqui
Right before the start of the pandemic in 2020, Venezuelan food truck Empanadas Aqui opened its highly anticipated brick-and-mortar restaurant in downtown Mason. And now, the restaurant has announced it will be closing its doors. "We have made the difficult decision to close the doors of the restaurant. Our last day will be Saturday, January 29th," reads a Facebook post from Empanadas Aqui. "Unfortunately, COVID has had a dramatic impact on our business. We have run several scenarios to see what options we have but the effects of COVID have outlasted small business assistance and hard work. Recovery is not in sight." They say they had been open for 15 days before COVID shutdowns began in March of 2020.

Angilo’s Pizza
Angilo’s Pizza, at 329 W. Pike St., announced before the new year that they would be ceasing operations on Jan. 5. “Due to unforseen (sic) circumstances with the economy and distribution we regret to inform you that after 60 years and 4 Generations we are closing our doors,” the pizzeria wrote in a Facebook post. “We’ve made so many customers over the years that have turned into friends and mostly family to us.”

Grand Finale
The Grand Finale restaurant in Glendale announced on Facebook that they are permanently closing. Known for its delicious desserts, among other fare, the Cincinnati staple has been operating for 46 years.
“It is with a heavy heart that I announce, Grand Finale Restaurant has permanently closed,” owner Virginia Chambers wrote in the post. Chambers did not provide a reason for the restaurant’s closure. She says they are grateful for all the support they have received, ending the note with “Through our generational friendship, you are family and we will miss you!”