The team's five primetime spots are the maximum permitted by the NFL. 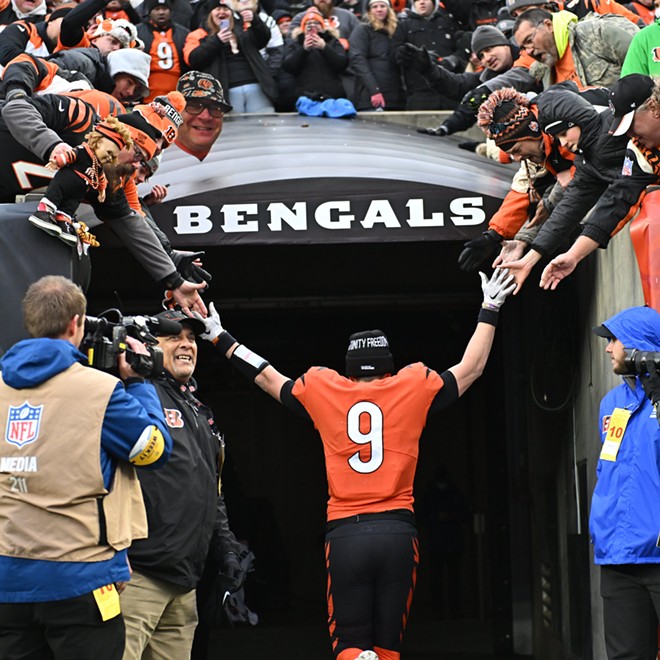 photo: twitter.com/bengals
Joe Burrow and the rest of the Cincinnati Bengals will battle Tom Brady and the Tampa Bay Buccaneers during the 2022-2023 NFL season.

The Cincinnati Bengals are hoping that some of last season's Super Bowl magic will stick around.

The Bengals announced the 2022-2023 regular-season schedule on May 12, and it's brimming with both long-standing and newer rivalries, including an exciting home slate and five primetime television spots.

The regular season kicks off against the Pittsburgh Steelers on Sept. 11 at Paul Brown Stadium and will end on Jan. 7 or 8 in a battle with the Baltimore Ravens in Cincinnati.

Season highlights include Oct. 16 at New Orleans (where quarterback Joe Burrow and wide receiver Ja'Marr Chase excelled at Louisiana State University), Oct. 31 at Cleveland, and a great December run: Dec. 4 vs. the Kansas City Chiefs (home), Dec. 11 in a second round with the Cleveland Browns (home), Dec. 18 against un-retired Tom Brady's Tampa Bay Buccaneers (away) and Dec. 24 against the New England Patriots (away).

The Bengals first announced the team's home and away opponents for the 2022-2023 season in February but did not share game dates. 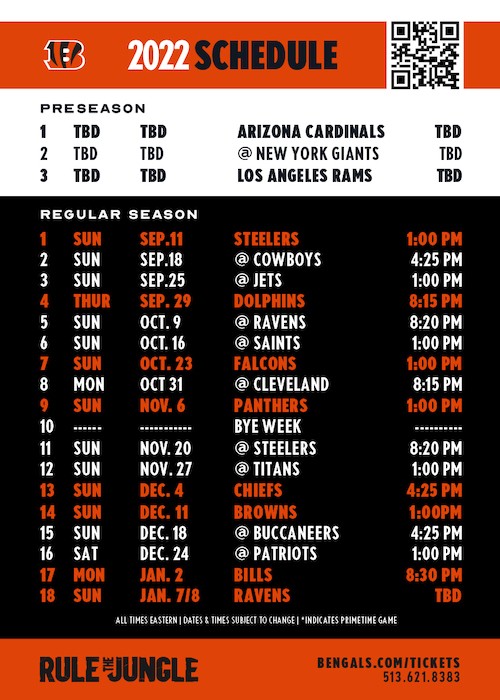 On Feb. 13, the Bengals lost 20-23 to the Los Angeles Rams in Super Bowl LVI, Cincinnati's first shot at the Vince Lombardi trophy since 1989. After earning a 10-7 regular-season record, winning the AFC North, and pulling out magical win after magical win in the post-season — including the AFC Championship — the Bengals were thwarted by sacks and a lack of consistency.

But despite the Super Bowl defeat — which came in the final two minutes of the game — the 2021-2022 Bengals team let Cincinnati fans dare to dream again after years of constant loss. Fans contributed to the Bengals having the most-watched Super Bowl in the last five years. Leading up to the game, businesses and organizations throughout Greater Cincinnati plastered their buildings with Bengals signs and created special items to celebrate the playoffs. Governments even got in on the act, with Cincinnati City Hall flying a Bengals flag; Dayton, Kentucky, renaming itself as "Deyton"; Cheviot changing its street signs to Bengals names; and Ohio Gov. Mike DeWine declaring that Super Bowl Sunday would be called Cincinnati Bengals Day.

Since the Super Bowl, the Bengals have extended head coach Zac Taylor's contract through 2026, Burrow has topped a number of football experts' preview lists and wide receivers Chase and Tee Higgins have starred in new ads for Nike.